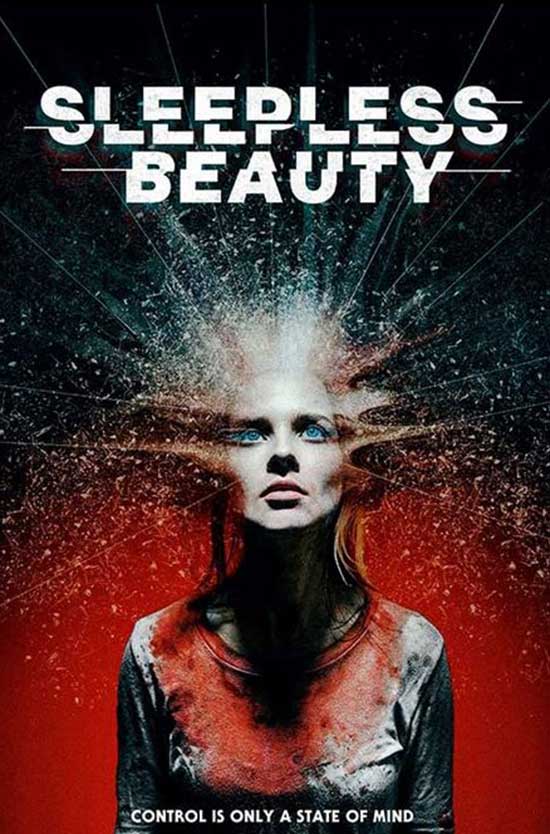 SLEEPLESS BEAUTY tells a twisted story about a young woman, Mila, who is kidnapped by a mysterious organization known as Recreation. Her unknown abductors talk to her through a loudspeaker and set strict rules: she cannot sleep and has to fulfill bizarre and violent tasks if she hopes to stay alive. At first, it looks like someone’s sick idea of entertainment but as the demands become more intense, Mila begins to realize that she is losing control of her own mind and instead, may be a pawn in a twisted and deadly psychological experiment.

Directed by Pavel Khvaleev and written by Aleksandra Khvaleeva, Sleepless Beauty is a psychological conundrum.

Mila (Polina Davydova) Jennifer Roberts is the voice of Mila. Mila is picking up a fish and heads back to what looks like an apartment building. She runs into the creepiest of creepy dudes. She is in her apartment preparing the fish and the little fish bowl. She charges her phone as soon as she gets home.

And…. Out of nowhere, someone has kidnapped her. She has a plastic bag over her head. She is a what looks like a room from SAW but someone maintained the upkeep. The group is called Recreation and you cannot go to sleep. If you’ve suffered from or enjoy insomnia, this may or may not be the film for you. Insomnia and lack of sleep has various effects on people. Insomnia can cause chaos in the mind.

Someone talks to Mila through a loudspeaker and taunts her, torments her. There is also a chat going and she’s being filmed. (The world is definitely not all “sunshine and rainbows.” It’s scary when you really think about so many horrible things that happen. People disappear, people killing one another. It is scary.)

There is bucket with a creepy doll and either meat or human flesh in the bucket. Now a masked man comes in and tases her, straps her to the one really uncomfortable looking chair that sits in the middle of the room. He puts some virtual reality head gear on her. She has to stay awake for all of this. Most movie killers knock people out. They may not want them to sleep but the usual torture of keeping someone awake and on the brink makes the film different.

Mila is forced to think, forced to react and answer questions. She has yet to answer but the loudspeaker voice talks about a situation that Mila will have to make a decision about. Mila’s family found out she’s missing. (How do they always manage to find the most uncomfortable chairs in all of history?) The masked man brings a masked woman in.

The loudspeaker voice begins to quiz Mila. The Nintendo like music makes it scary. Mila wins this round but the other masked girl is not so lucky. The masked man has quite a clean-up method. It’s like it’s all designed to entirely drive Mila insane. Mila is starting to look tired, stiff and in need of sleep. (It’s “dinner time.” I don’t know if I’d want to eat a meal from people who are holding me captive but, who knows?) They bring in food, LOCKED in a wooden make-shift contraption. The loudspeaker lady times Mila, not for eating though. It’s worse. 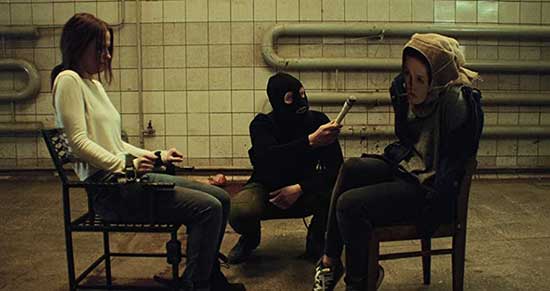 The police officer, at least he seems to be a police officer is now checking Mila’s social media and her apartment building. One cop, let’s not forget the rules. Randy Meeks would be disappointed. Evgeniy Gagarin plays the masked man. It just gets worse and worse for poor Mila. The creepiest part of this movie is the people in the chat, the people watching this as a live feed. Wild, trippy hallucinations from whatever this “doctor” is doing to Mila.

This woman is put through so much. You root for her. You want her to get out of this mess. It’s just disturbing with social media and people are watching this happen. Be alert, be aware of surroundings. #HelpfulHorror – This movie has a wild ending. You have to watch it.