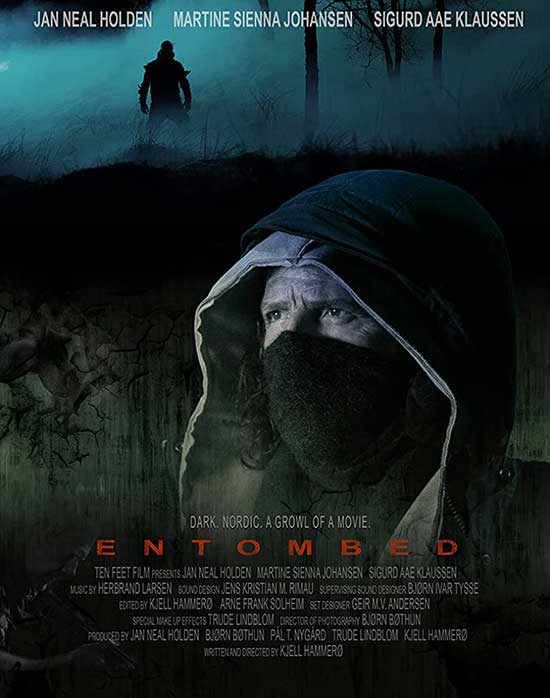 Dark. Nordic. A growl of a movie.

In the near future a pandemic has broken out. In this post-apocalyptic world civilization has collapsed and mankind is threatened. We follow Seamus on his desperate run from dangers. By accident he comes across a subterranean shelter and decides to entrench himself there. He is however not alone. Konrad and his wife Mila, who is in a coma, also hides down there. Soon Seamus discovers that things are not the way they first seemed to be.

Gradually it turns out that life in the underground shelter is as dangerous as the one on the surface.

The language is in English because of the story, and it also makes it easier to reach an international audience.

«Entombed» is a low-budget feature film. The production company Ten Feet Film AS located in Bergen/Norway was established by five highly experienced people from the industry, and they all have key positions within the crew. Our production budget was only 5000 $. These were all funding’s collected by some sponsoring and the rest with the help from campaigns on Indiegogo.com and Bidra.no. We could not have pulled it through without the fantastic help from newly educated students, sponsors, and some of the best experienced people from the industry. For instance, the music is composed by former member of the well-known Norwegian black metal band “Enslaved”, Herbrand Larsen. The unison drive of all the involved is the high devotion and belief, that this is going to be a low budget feature film with the highest quality.

Everyone in the crew have a type of contract that will give them different percentages of the profit, as long as the film keeps earning money. These contracts are not commonly used in Norway, but Ten Feet Film wishes that all involved shall take part in the possible positive outcome.

Because of the COVID-19 pandemic, our previous marketing plan with a premiere and hopefully attending festivals, with a physical audience, naturally had to change. Now we have applied to digital film festivals and we are going to release the film on video-on-demand platforms and on DVD/Blue-ray in 2020. We also have an upcoming event on Facebook the 29-31 of May, which is a free test-screening of the film. This will hopefully help us build an audience.

We will gladly answer any question or take interviews if you want to learn more about this production.