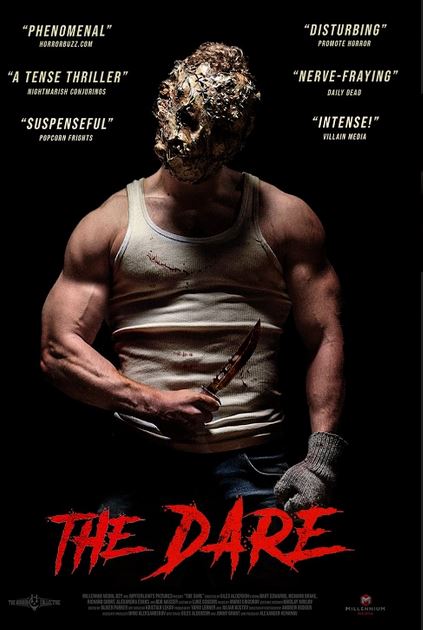 The upcoming award-winning horror film THE DARE is now available for pre-order on iTunes! The film, which was produced by Millennium Media and is being distributed by The Horror Collective, will be released on March 3rd, 2020 on VOD and digital platforms. It will also have a limited, one-night release in theaters on March 6th, 2020.

The Dare had its world premiere at Ft. Lauderdale, FL’s Popcorn Frights Film Festival where it received the Audience Award for Best Feature Film.

When a childhood prank goes wrong, four strangers are forced to relive a cruel game at the hands of a masked psychopath.

The film is directed by Giles Alderson (World of Darkness), who co-wrote the film with Jonny Grant (Arthur & Merlin: Knights of Camelot), and produced by Julian Kostov (Treadstone, A Discovery of Witches). It was executive produced by Yariv Lerner (Rambo: Last Blood, Hellboy, Angel Has Fallen).

Pre-order the film on iTunes: