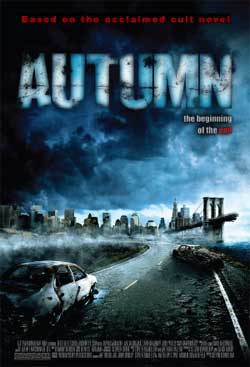 Billions are dead and the few that are left start to realize they are not alone. Initially when the dead begin to rise, they are not very threatening. However, in a short period of time, the lurching bodies begin to get their most basic senses back and this makes them much more dangerous. When the dead become attracted to light and sound, the survivors have no option but to live in silent darkness

Autumn is a 2009 horror film starring Dexter Fletcher and David Carradine and is directed by Steven Rumbelow. It’s about a virus that kills billions of people quickly. The survivors now have to deal with the world and each other after the apocalypse.

The movie opens up with billions of people throwing up blood, having seizures, and dying. Believe it or not, it’s nothing interesting. People then come together to talk about what happened. Again, nothing interesting. This is how we pretty much sum up the movie in the first 5 minutes, noting interesting, until a man in a clown suit comes up. Interesting, but only for a few seconds. *sigh* They start talking about what to do, if there are other people alive, safety, and if they should all go back outside. Good, good, but it’s not getting any better. A girl then walks into the room where the other survivors are. All the woman is doing is walking around without a pulse. They get her out of the room. (Seriously, could this movie get any more boring?) They all leave where they are and go look for other survivors and clean water. As they leave, we think about doing the same thing! Later in the film the zombies start attacking. Does it get any better? Nope! Sorry everyone!

Let’s take a break from this film for a second and talk about something else. This is the late, great David Carradine’s last completed film. We just wanted to take this time to say that it’s just too bad that this was his last film and it wasn’t something much more memorable. He was a great actor and deserved a much, much better swan song than this horrible film. He’ll missed.

Anyways, sorry about making this into something more interesting. Back to the boring review! (Once again, our apologies!) What’s funny is that the actor’s start talking about how we feel about this movie. They talk about leaving, how this is stupid, and dead. If only that could save this film!

First off, a group of people surviving the alleged apocalypse is a premise laced with possibilities. Do they enjoy their new found freedom? Do they turn on each other? Do they try to figure out why they have remained unaffected by whatever has killed off the rest of the human race? This premise is squandered here. How many times can we talk about getting supplies, or talk about whether or not we’re safe where we are, or talk about whether or not there’s anything to talk about before something actually happens? This movie has the pacing of the line at the DMV.

Secondly, when the human race is nearly wiped out, a filmmaker has to address the question of what exactly is there to root for. If the survivors are merely meant to go on living until they die, where’s the tension? Why are we sitting through the movie? Autumn gives us characters we don’t care about with motivations as simple as the zombies they are easily sidestepping. There is nothing at stake in this movie.

There are movies which are bad because the miss the mark they are aiming for. Those movies are fun to watch because of the unintentional humor they provide. There are movies which are bad because they hit the mark, which happens to be an innocent bystander’s torso. Those movies are not fun to watch because we, the audience, are that innocent bystander. We’ve reviewed both types. This movie falls into neither category. This is a movie without a target, and arguably without a bow. It’s just an arrow casually tossed around, picked up and tossed again aimlessly.

It feels as though nobody involved in the project cared one way or another about the result. In reviewing this film, we feel like we’re grading a research paper from a student who scribbled the content together on the bus from an outline their mom wrote for them. You stand to gain nothing from watching Autumn. Download yourself a good screen saver instead. 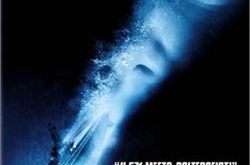 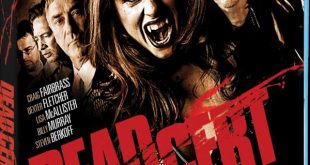