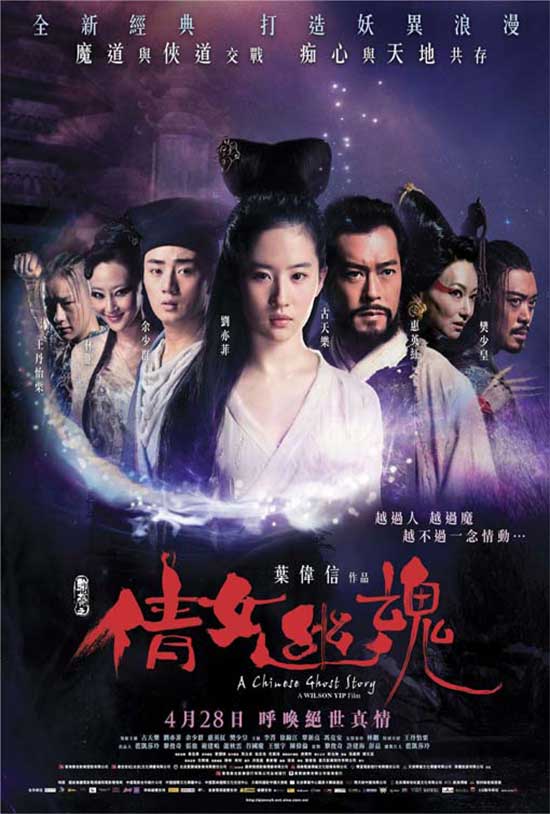 Tax collector Ning, a clumsy and easily frightened man, doesn’t have any money and decides to stay overnight in an abandoned temple. Little does he know that the temple is haunted. He meets a very beautiful lady who seduces him, but he doesn’t know that she is a ghost, usually not leaving any man alive…

In 1987 the director Ching Siu-tung together with the film making legend, Tsui Hark brought the world one of the greatest horror fantasy films ever made; A Chinese Ghost Story. It’s packed with sword wielding action, romance, comedy, supernatural forces and oodles and oodles of great atmosphere.  Quite understandably it went on to kickstart a trend of folklore-based films in Hong Kong cinema and its popularity sparked two sequels, an animated film and finally in 2011, a remake of the original, this time with Wilson Yip of the IP Man fame, at the helm.

The premise of the story is largely the same as the original: a young government official Ning (Shaoqun Yu) has been invited to a remote mountain area to find a new water source for a village plagued by drought. While investigating the surrounding mountains with a help of some locals, he comes across an old temple with abundance of fresh water for everyone. Of course, as any weary traveller should know, when things look too good to be true, they often are, and the village entourage soon meet they fate in the hands of some beautiful but deadly demons. However, clueless Ning, focused on the finding a way to get the fresh water all the way down to the village, encounters Nie Xiaoqian (Yifei Liu), a fox spirit that he eventually tames with a piece of candy. After much fuss and commotion involving explosions, demon hunters, and poisoned water, the two obviously fall helplessly in love, with the evil tree demon Ying Hong Hui (Kara Wai) standing on their way. I will not go into the nitty gritty of the different plot twists, but I can reveal that the same main elements of love between humans and supernatural beings and lesser spirits been enslaved by greater ones are still present.

However, while the premise remains the same, Mr. Yip has not by any means constructed a carbon copy of the original, but instead created a more updated version of the old. All the main characters are all slightly different, some more drastically than others, changing the storyline somewhat on the way. The character of Yin Chek Hsia (played in the original by Wu Ma), the Taoist priest/swordsman has been changed to Yan Chixia (Louis Koo); a demon hunter who’s professional life has taken somewhat a downward spiral since he went and fell in love with a demon some years earlier. Ning is still a dedicated government worker but rather than collecting taxes, this time around his occupation seems to involve investigative work of some kind. The woman in the centre of it all, Nie Xiaoqian, has been upgraded from a ghost to a fox spirit/demon. 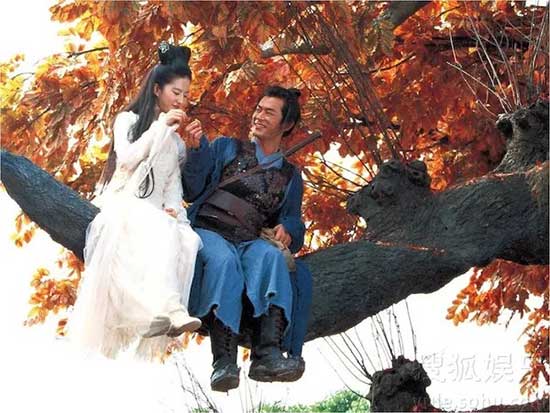 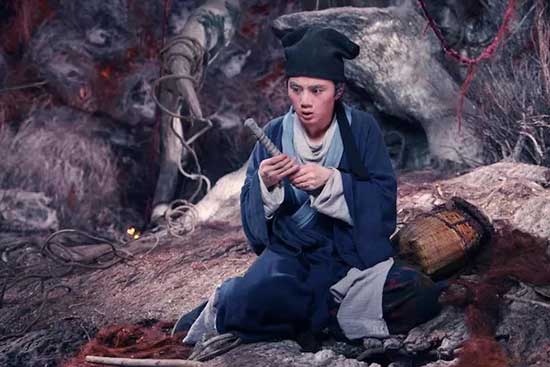 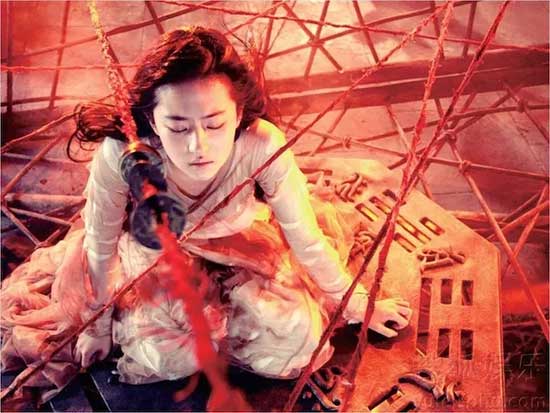 The biggest change to the plot is the love triangle between these three main characters. As it happens the demon that Yan Chixia fell for all those years ago is of course none other than Ning’s current love interest Nie Xiaoqian. From a personal perspective I found this somewhat contrived as it didn’t seem to serve any great purpose towards the plot, other than perhaps offering Yan a slightly more understandable motivation to not kill Nie Xiaoqian on sight. This is also not helped by the fact that all the main characters feel rather soulless with no real depth to any of them. Shaoqun Yu does not quite reach the same heights of physical comedy as Leslie Cheung did in the 1987 version and the overall spirit of the character seems to have gotten lost somewhere in the way. This is quite a shame as some of the funniest moments of the original film come from Ning’s clueless shenanigans.

Changing Yan Chixia character from a priest to a demon hunter is not quite as unsuccessful, as it works as an useful tool to introduce more action to the film. While the original version is certainly not short of action either, the new version takes it to a new level by the help of modern special effects techniques. That’s not to say that these new effects are necessarily better than the old ones, but I would say that they have been used to the films benefit and for the most part the action scenes are a pleasure to watch.  Yifei Liu’s performance as the siren like spirit trapped by the evil tree demon is unfortunately quite forgettable. For some reason or another she can’t quite bring forth the same beautiful melancholy as Joey Wang does in the original and her depiction of the sorrowful spirit is left wishy washy at best. However, my biggest disappointment of all was the character of Old Evil, or Ying Hong Hui, the tree demon behind all the, well, evilness. I absolutely loved Siu-Ming Lau’s wonderfully androgynous performance in the original. He not only exuded evil with his dramatic depiction, but having a man play the role written for a female, gave the character an otherworldly feel that just worked perfectly. Pure brilliance if you ask me. While Kara Wai does a pretty decent job as the ye olde tree demon, even with her demonic antics boosted up with all kinds of CGI madness, she cannot quite reach the same level of villainous wickedness. 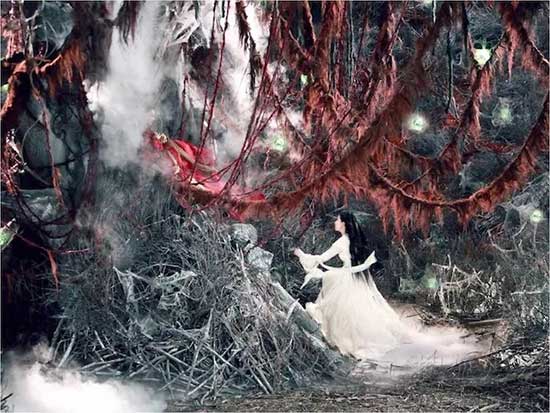 All that being said, as remakes go Mr. Yip’s version of this old classic is not a complete disaster. Like mentioned previously the modern special effects technology works quite well and the CGI has not been overused to the point of overshadowing the rest of the film. Instead it helps to bring the story alive in a new way and no doubt also helps to introduce it to new audiences, who may have otherwise never even heard of the original. While the characters might be more one dimensional, they do not take away from the action side of the film. As long as you’re not waiting for deeply complex characters or profound character studies, you can surely find enjoyment in this action packed 21st century update. It might not deliver the same atmosphere as the original, but it’s still a good hour and half of solid, shut off your brain kind of fun.