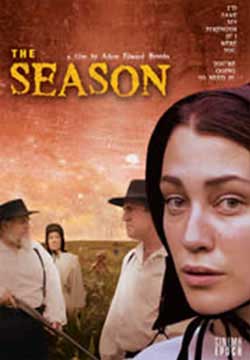 Rural Iowa. A Quaint Store. Strangers, deemed suitable breeders, find their vehicles sabotaged. Before dawn, they become subjected to the unholy practices of the excommunicated Amish family, as well as several genetically defective ‘kin’ amongst them. Once again, it is the time of The Season.

See the trailer of “The Season”

Taking the country roads is always a possibility in avoiding highway traffic, enjoying scenery, and taking the shortcut on the journey to one’s destination. Unfortunately, the horror industry takes advantage of what seems to be the easier way, and makes a shortcut complicated when the unprepared character run into who may live on these back roads. In Adam Edward Brooks’s “The Season,” three separate groups of travelers cross paths when their cars are sabotaged by a gas station ran by Amish society set on continuing their practice in new generations by reproducing with people outside the Amish community.

Joe(Richard Glockner) and daughter Melissa(Erin Lund) are taking the road trip that they have been taking for years, as Melissa thinks out loud about her possibilities of furthering her education. They stop at a gas station completely ran by an Amish family, that Joe recalls stopping at every time they take their trip through the scenic countryside. Next, a classic vehicle driven by Hank(AJ Bowen) and Eddie(Adam Meirick) pull up beside another vehicle that are there to fuel up. The third vehicle has two sisters, Brenda(Tracy Pelzer-Timm) and Wendy(Jama Kniffen), and the boyfriend hauling them around Nick(JP Wohl.)

Inside the gas station, a very pregnant Ruth(Liz Wood) goes into labor as the travelers enter the store. Hank’s buddy Eddie woos a young Amish girl Esther(Julianne Mason), and ends up bedding her behind the backs of the Amish community. When Ruth births another stillborn, Eddie is attacked by one of the Amish men and all the travelers are systematically captured. In captivity, the first method of punishment is upon Eddie who had relations with Esther. An African-American doctor(Nya Kadenge) immediately starts to torture Eddie, and ends up gouging his eyes out.

While in captivity, the travelers learn the history of the Amish family, and their intent to use the non-Amish women to reproduce due to genetically inbred children being unable to continue the generations to come. The genetically unfit are used to attack outsiders, and are monsters that are kept in barns outside their family home. When Esther sides with the outsiders, she helps in Joe and Nick in their attempt to save their loved ones in being next in line to reproduce with the psycho Amish community, set on continuing on for years to come.

The horror aspects of “The Season” all revolve around the possibility of a genetically defective race of inbred Amish people that are monster-like in character, and their facial features are menacing in deformities. The gore factor is there, as victims are disemboweled and cut up in systematic bloodshed. The blood and guts shown was realistic and well done. There is also more to add to the disturbing factor of the movie, as non-Amish women are forced into intercourse by horny Amish men striving to continue their generation. There is even what I referred to as the “rape bench” where women are tied down and bent over so that they can be forced into conception by a male within the community. Even though the story is an interesting urban legend, the acting within the movie was robotic and amateur that took away from the realism of the movie.

A diabolic Amish community capturing innocent victims at their rigged gas station sets the tale of murder and rape in Adam Edward Brooks’s “The Season.” Even though the country roads seem like a good idea when travelers want to take a scenic shortcut, horror films are notorious in portraying that sometimes the easy way is the hardest.