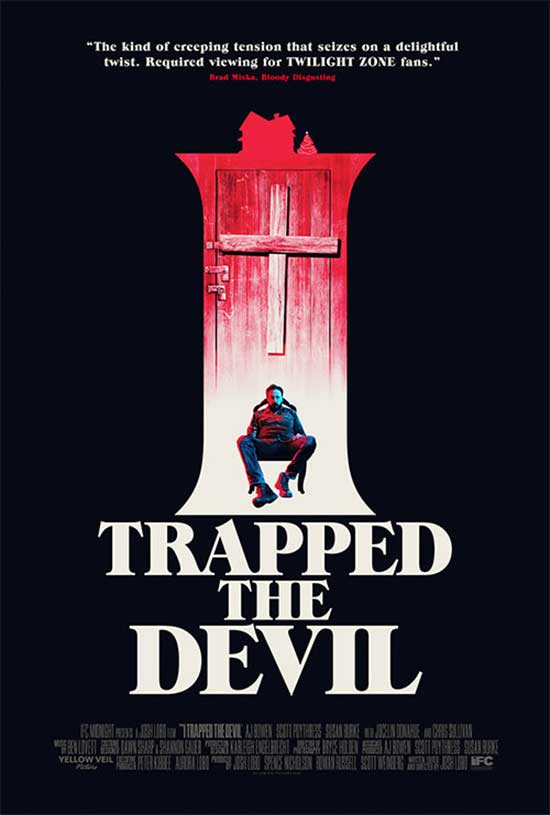 A man descends into paranoia after trapping what he believes to be the devil in his basement, but things take a dark turn when his family unexpectedly arrive for Christmas.

As horror fans, we’re all familiar with the various creatures and antagonists of the genre; vampires, werewolves, zombies, the list goes on and on. But much as we love them, we all know that these are mere fictional creations, or at the most flimsy myths based on age-clouded folklore. There is one being though, that an incredible percentage of the world’s past and present population actually believes to be a real, living entity; The Devil, Satan himself (although oddly enough one of the biggest organized religions that DOESN’T believe in a physical manifestation of Old Nick is Satanism…). There have been countless movies over the decades that have focused on Lucifer and his evil machinations – many have gone for the lurid, sensationalist approach (remember Arnie firing rocket launchers at Beelzebub in End Of Days, or Al Pacino chewing the scenery in Devil’s Advocate while Keanu Reeves looked blankly on….. hoo hah!!), while a select few have opted instead for a more measured, down to earth tone (think Rosemary’s Baby or Angel Heart).

I Trapped The Devil follows the latter approach; this 2018 movie was written, edited and directed by Josh Lobo. After a short pre-credits sequence we meet couple Karen (Susan Burke) and Matt (A J Bowen) as they arrive at an ominously dark house, in the midst of a bleak, windswept midwinter landscape – this is the residence of Matt’s apparently estranged brother Steve. The interior of the house is barely more welcoming than the snow-bound exterior, dimly lit in cold shades of neon red and green by stark Christmas decorations. Hardly any more friendly is Steve (Scott Poythress) himself; living in solitude and clearly perturbed by his brother’s unannounced visit, he quickly makes it plain that he doesn’t want company for the holidays, but reluctantly lets them stay.

It’s clear from the offset, thanks to Poythress’ subtle performance, that Steve is not well – he’s agitated and nervous, and this initial scene sets the tone for the rest of the movie; back story is hinted at in an organic manner rather than offloaded in a massive exposition dump, giving us just enough information to piece together the fractured relationship between the two brothers. It’s very minimalist and effective.

While Karen and Matt adjust to their ominous surroundings, we witness Steve answering mysterious calls – the jarring tone of an old-school bell telephone cutting through the eerie stillness of the house like a knife, and the only sounds on the other end of the line being sinister noises and whisper that clearly agitate Steve further. Things quickly start to escalate when Karen finds a loaded gun hidden in an upstairs room; and Matt, following Steve’s revelation that he has someone – or something – trapped in the basement of his house – is now convinced that his brother has lost his sanity and is a danger to them all. Steve is beyond doubt that he has managed to capture the Devil himself – and once Karen and Matt hear the sinister voice coming from behind the door, their faith in what’s real and what’s imaginary is put to the test.

I Trapped The Devil is proof of just what can be achieved in horror with a good story, excellent performances and a relatively tight budget (around the $1,000,000 mark in this case). The camera prowls assuredly through the menacing interior of the shadowy house, which is often bathed in cold neon glow; and the soundtrack conveys a chilling atmosphere with omnipresent howling winds. The interior of the house – whether it be Steve’s room, clearly the product of a troubled mind with its adornment of sinister pictures and news clippings, or the dank basement with its crucifix-covered walls and eerie whisperings – feels more dangerous than being outside.

The lighting of the film is great, and altogether the film manages to create a tactile atmosphere of unhurried dread. In this sense it has more in common with movies like John Carpenter’s Prince of Darkness – thanks to a relatively small scale the stakes feel more threatening and personal than typical effects-driven Hollywood horror. The actors all carry off their roles with aplomb, but Scott Poythress is particularly good; he manages to convey Steve’s emotional fragility brilliantly. We’re never sure as to whether the Devil exists in reality or merely as a product of mental illness.

How much you will enjoy I Trapped The Devil really depends on what kind of horror fan you are; if moody, atmosphere-driven chills that feel tangibly real appeal to you I’d definitely recommend it; if Underworld-style CGI werewolves bounding across the screen are more your thing I’d probably skip it.