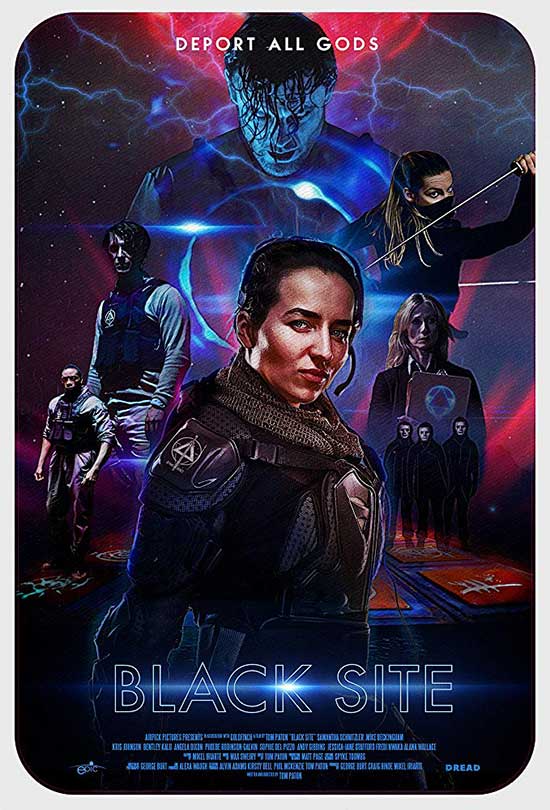 An elite military unit encounters a supernatural entity, known as The Elder Gods, that forces them into battle against an army from another world.

Anyone even vaguely savvy with the internet will be aware of the ‘two thing’ phenomenon wherein someone on Deviant Art throws two properties together in a picture that will later be slapped on a T-shirt. Some consumers of pop culture love them, whilst others could live without them. The most egregious one that comes to mind for this critic is a t-shirt emblazoned with Deadpool writing Walking Dead graffiti on a Tardis. Two things plus one. 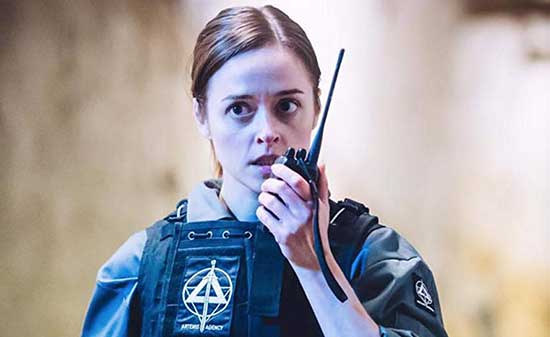 How you feel about this cross-pollination of franchises may determine your mood with regards to Black Site, the new film from Director Tom Paton (Redwood), which sees the aesthetic of 80s John Carpenter collide into the despairing humanity of HP Lovecraft.

Kicking off with a strong opening of 8 bit graphics and more modern digital models, Paton lays down the ground rules of Black Site. The Elder Gods you know and love have come out of hibernation to enslave the human race. However, an infinite slumber has led to them being weak and, through the power of science, humanity has worked out how to not only trap the Elder Gods in human hosts, but also catapult them back where they came from. Quite how this stops them from coming back for a second round is never really explained but hey, who needs logic? 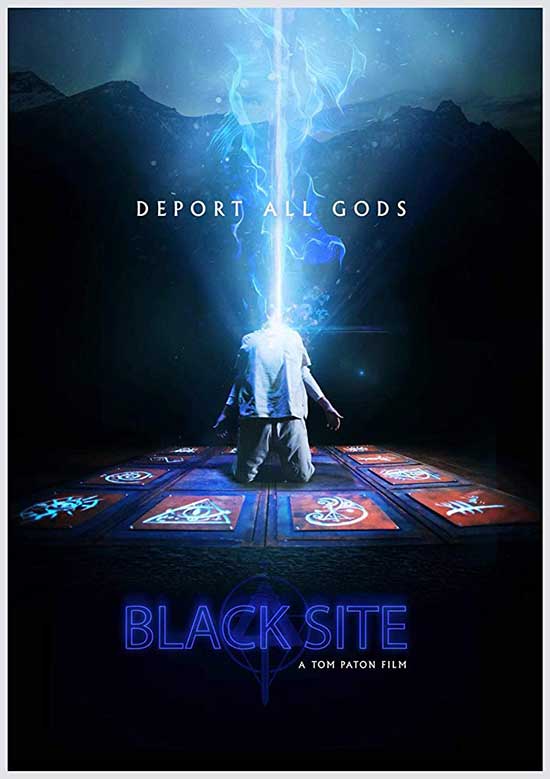 In to this bold new world steps Ren (Samantha Schnitzler), a member of Artemis Black Site, the government organization with responsibility for pinging gods back into the atmos. As a child, Ren’s parents were killed by the god, Erebus. Cut to several years later and Ren just so happens to be present on the day Erebus is in custody, ready for his intergalactic mail return. Before you know it, a gang of Erebus’ worshippers have invaded Black Site in an attempt to break it out of jail. It’s at this point, Black Site settles into a well-worn groove of one hero versus several bad guys in fast paced punch ups. Let’s be grown-ups here: you already know if this film is for you or not.

For all its promise of science vs magic, and seeing Cthulhu ominously floating in the atmosphere really does look great, Black Site just never quite works in the way you want it to. The ability to pour malevolent, omnipotent beings into human hosts does put a damper on proceedings form the get go. If you were hoping for Ren to go up against a mass of feelers, a scaly, rubbery-looking body, prodigious claws on hind and fore feet, and long, narrow wings behind, whilst armed with nothing but a samurai sword then you’ll likely be disappointed. Erebus, played in human form by Kris Johnson, is boiled down to a moody 30 something with a greasy emo fringe. That doesn’t really feel like a threat to humanity, does it? Well, perhaps the fringe does.

You certainly can’t fault how the film looks with its glossy neon visuals and deliberate overtly masculine tone. Black Site is played completely straight as it should be. It’s just not enough to carry the whole film and once the novelty has worn off, you’re basically left with an action movie with its wheels spinning. Yes, working to an obviously tight budget does mean you have to cut corners in production. However, when Black Site is stacked up against something like Seven Kostanski’s The Void, which covers similar themes, then you realize the potential that’s been wasted.

When you hear Lovecraftian action movie, it’s fair to say that nothing could truly capture what that means, with the exception of Del Toro’s Hellboy perhaps. So, with that said, Black Site can still be a fun film for the most part, but it never quite lives up to what it could be. It’s certainly one for the Midnight Matinee crowd.

Black site is now available on bluray per Epic Pictures