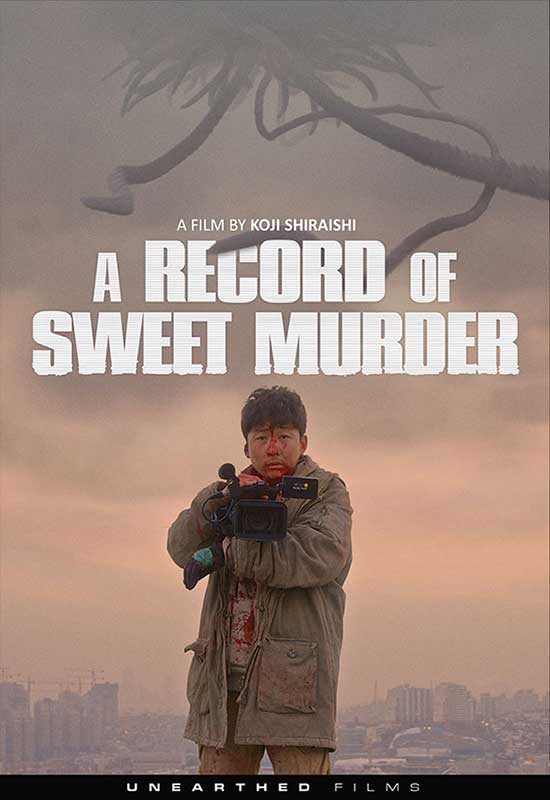 A South Korean journalist and a Japanese cameraman in South Korea are invited to an abandoned apartment one day. They are invited by a murderer and they know it. While there they stumble upon a video featuring the murderer. The police believe the wanted criminal has committed eighteen murders, but the criminal claims he has already killed 25. He furthermore claims that if he completes the killing of all 27 on his list not only his dead friend will be resurrected, but also all 27 will come back to life. A divine voice had told the murderer it would be so.

A Record of Sweet Murder (aka Aru yasashiki satsujinsha no kiroku) is about a South Korean reporter (Soyeon; Kkobbi Kim) and a Japanese camera operator (Tashiro; writer/director Koji Shiraishi) who have been specifically requested by an active serial killer (Sangjoon; Je-wook Yeon) to document his next actions. This would seem quite the risky venture on the surface, but the duo has two things going for them: Sangjoon promises not to hurt them as long as they keep recording, but maybe more importantly, Soyeon and Sangjoon were childhood friends up until a tragic event happened to them, so there is a connection there, albeit one from nearly 20 years prior. However, once the alleged killer explains the details of his plan and how it came to him, Soyeon and Tashiro can’t help but feel they’ve made a terrible mistake. 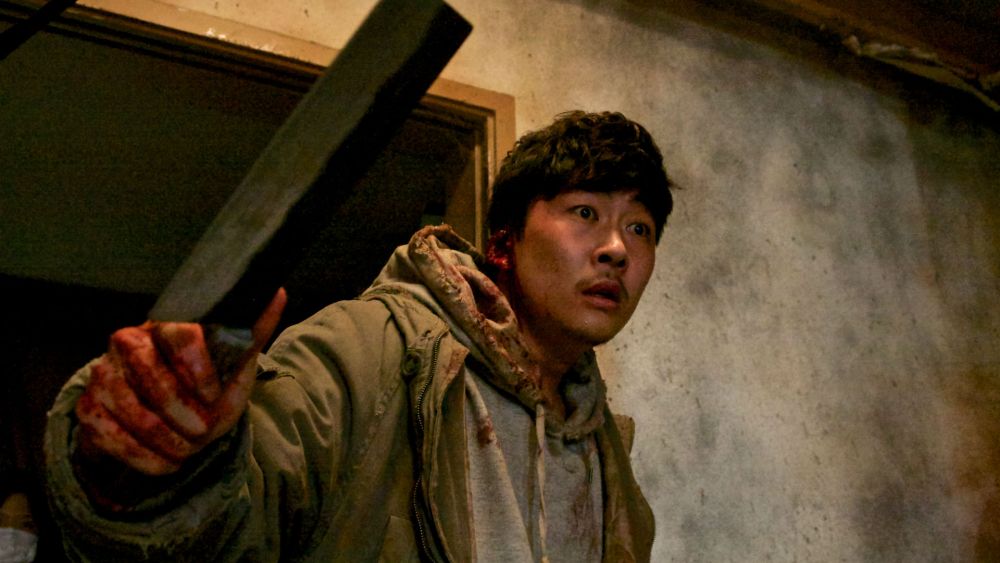 This isn’t necessarily a film that overly relies on twists, but there are a couple that are far better seen than read about. The general idea is that Sangjoon has not killed a mere 18 people, as the news has reported, but actually 25, and he only needs to kill two more so that all of them, as well as Yoonjin, a mutual childhood friend of his and Soyeon’s who died tragically as a young girl, can come back to life. How does he know this? Because he’s been told, ever since he was 10 years old, that when he turns 27, he must kill 27 people. He’s even been given details of who to kill and how to kill them. And all of this must be documented, which is why he contacted his childhood friend and asked her to find a Japanese (they must be Japanese, he was very specific) camera operator and have the two of them meet him in a rundown, abandoned apartment building.

A Record of Sweet Murder was written and directed by Koji Shiraishi, a Japanese filmmaker who has shown he’s not afraid to delve into the found footage style in order to bring the audience right in close to the action (see also Shirome, Noroi: The Curse, and Occult; he’s probably best known among extreme horror fans for the Guinea Pig-esque Grotesque). Here, he takes it one step further by delivering a found footage-style film that is primarily comprised of one shot (or at least is edited to seem like it), so it’s not only putting the audience in the same room as these characters, but it’s also delivering the action in real time. This is an impressive, and difficult, feat. Cuaron and Inarritu, in Children of Men and Birdman respectively, employed careful editing to make parts of their films seem like one continuous shot; in the horror genre, Adam Mason not only employed this technique for part of his short film Empire of Dirt, but most of Pig is all one shot as well. For this technique to work, everything has to go just right. Thankfully, the acting is on point across the board, by all three main characters as well as the previously unmentioned Tsukasa Aoi and Ryotaro Yonemura (who excel as a somewhat disturbed honeymooning couple).

A Record of Sweet Murder initially premiered in early 2014 through Nikkatsu and Zoa Films, hitting a few film festivals in Asia and then Europe. Thanks to Unearthed Films, it is finally getting American distribution on the DVD/Blu-ray market in May of 2019. While not as intensely gory as Brutal or American Guinea Pig: Sacrifice, A Record of Sweet Murder is one of the top films Biro and company have put out in the past couple years.

The concept is not wholly original, but still unique in its own way. The delivery, with the long shot and the set-up, is impressive and a nice change of pace for the genre film audience. Despite the single setting for much of the film and a very small cast, there is still a surprising amount of sex and violence on screen. And there is something both intensely disturbing and unexpectedly, well, sweet, just as the title promises, about the anti-hero of the story, Sangjoon. Shiraishi has been consistently putting out quality work, and while this isn’t his newest effort (a few have come out since, including Sadako vs. Kayako, the Ring vs. Grudge showdown), it’s a really great movie that deserves the attention it will be receiving now that it’s found a new market.

A Record of Sweet Murder is now available at Unearthed Films