Bible Black wins Best Short Film at 2019 Best Short Film at HorrorNewsNet Film Festival.  Jon Morvay has released BIBLE BLACK for FREE, but only for a limited time. Watch Morvay’s disturbing tales of horror and find out why it’s been BANNED across the United States.

In the tradition of Amazing Stories and Twilight Zone comes a thrilling new hybrid of literature and animation: The ultimate animated Graphic Novel Bible Black! Cutting-edge fiction…Mind-blowing graphics…the must see animated horror classic of the year…if you dare?

What happened to Lobster Girl after the end of Bible Black?

“I wrote the original as a one-shot and never expected to have the sales numbers and the interest with such a unique themed and polarizing comic. It was the highest selling independent comic of the year. I think people are tired of X-men, etc. The fans are talking and the story has hit a nerve with every love-sick psychopath like me. I hear you my “Mad in Love” compadres (Follement Amourese)… I have to get to work on Lobster Girl 2. Even I am excited to find out what happens. : ) My wheels are turning.” – Jon Morvay 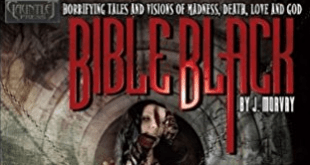