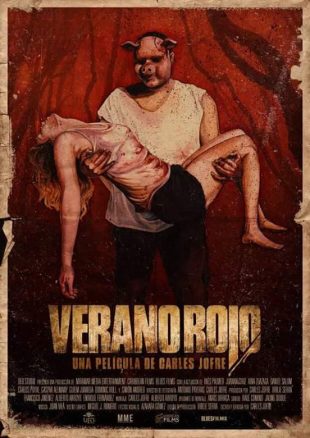 Four young people come to Mallorca to enjoy idyllic summer holidays, but delving into the most inhospitable places on the island will begin a hellish journey.

On any level, a first feature contains a spirit that cannot be replicated no matter the many highs and lows throughout the process. In a market that is saturated by so much horror, anyone can pick up a camera and create that first feature. They can tell a story that hits home or pushes the line and/or actually finds originality in the deep dark corners. All three of these focal points are a challenge in the different stages of the production. Unfortunately, many filmmaker’s have eyes that are usually bigger than their stomachs. They have dreams influenced by the flood of genre over the decades that shows, that any nightmare is possible. As they sit back to slash away the impossible ideas or FX that they cannot afford or to reconfigure production aspects, the real horror of indie filmmaking is revealed in what can be afforded and allowed with the time they have.

No matter where the filmmaker maybe, many debuts end up with what we witness in the Spanish horror debut called Red Summer (Verano Rojo) from filmmaker, co-producer, editor, and cinematographer Carles Jofre. A very streamlined film, Jofre and a small cast and crew tell the story of four friends (2 couples) who are trying to get away on a vacation but soon find out, that once you venture into the deserted areas and disrespect them, you can become prey in a deadly game sprung by a ‘Texas Chainsaw Massacre’ style family.

Before this review, I made it a point to watch Red Summer a couple times. In my travels, I see a lot of films that fit this twisted mold. On the surface, Red Summer is another attempt at the same disturbing, grindhouse formula that has been used for decades and has become the core of much indie horror today. Upon the second viewing, I found the film to be a class in simple, brutal, and promising filmmaking. Red Summer is a barebones thriller that infuses the brutality of the 70’s grindhouse influences against a stunning backdrop of vast emptiness. The film’s narrative unfolds on a short timeline of not more than a few days, I think. Majority of the cast and crew are working on their first feature with Red Summer and have very little feature film experience. The narrative pulls from a lot U.S. horror to form the story.

As stated above and an asset to the production, the location is visually smart and fits the film well creating isolation and hopelessness. Red Summer has two DPs behind the camera including Jofre and Antonio Payeras, who seem to have a dialogue in cultivating this vision and mood of this film overall. There are several sequences that make you feel very uncomfortable and create a dirty intimacy that many have come to associate with the previous grindhouse nightmares. The closeness of the victim’s bodies within the cages. The chase sequence in the final act and perhaps one of the favorite moments of the film focusing on the reveal within the headlights during the night. They make great use of the location, light, production design, and framing. 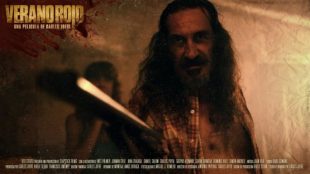 The editing for the film is an asset through the majority of the film. The assembly of this film never feels slow and builds the tension. This can be a challenge for many first-time features. Many of the scenes feel claustrophobic and reveal just enough to jab at the viewers mind. The only issue with the editing revolves around the final chase sequence between the ‘Pig man’ and the last survivor. This scene feels very drawn out instead of being more fluid leading to the conclusion. I am not sure why this sequence needed to have length it did with only an 89-minute film, but it could reflect having the filmmaker be a co-editor which I think for this project seems to be a benefit overall. Perhaps it is a tribute to TCM? Who knows, but it is overdone, silly, and stereotypical.

The sound and score didn’t have the impact on me, as I had hoped it would. They don’t hurt the film either. They set the mood and punctuate moments that are essential for an indie horror film like this. I was surprised however, we did not get more sound from the ‘Pig Man’ character since he is central to much of the terror. The cast performances are good overall with everything you want to have from those trying to survive. The film features a lot of fresh faces to horror who are mostly from Spain. The stand out performance goes to the veteran actor Simon Andreu, who has nearly 200 credits in his esteemed career. He has several horror credits including features from the 1970’s like The Night of the Sorcerers, Passi di danza su una lama di rasoio, and The Blood Splattered Bride along with his role as ‘Warden Brando’ in 2003’s Beyond Re-Animator. As the film’s villain ‘Abuelo,’ he is ruthless and despicable taking hold of the role. You feel something for his character but the rest of the ‘family’ and the ‘beautiful people’ you don’t really care about or connect to because they are typical victims who are seen in most films. While the narrative has a good pace, you never get much backstory on most of these characters. It is horror in the moment, happening to those who are alien to the land. Even the ‘Pig Man,’ is the usual ‘Leatherface’ grindhouse 70’s cookie cutter. 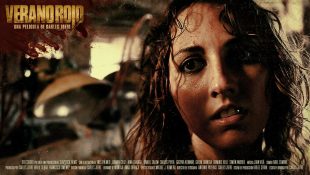 Red Summer is dirty, gritty, influenced, grindhouse Spanish cinema that fits a midnight watch. I enjoyed this film much more the second time around. Even with no subtitles, I could follow it mostly, but I am not sure if this is a good thing or not. The film has gore here, brutal violence there, some forced and uncomfortable sex situations, and of course, it features genre troupes that connects to the hardcore horror fan. In the end, Red Summer is not redefining the horror genre by any means, but it is resourceful, has something for everyone, and offers enough overall for a quality first feature.