Home | British Psycho Thriller ‘THE UNSEEN’ Acquired for US Release 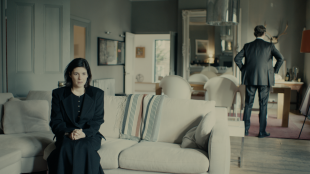 Subliminal Films has announced their recent acquisition of British psychological thriller ‘THE UNSEEN’ ahead of its bow at Cinequest later this month. Written and directed by Gary Sinyor, the film stars Jasmine Hyde and Richard Flood as Gemma and Will, a grieving couple tormented by the tragic and accidental loss of their son. Will soon begins to hear his son’s voice calling to him, while Gemma experiences strange hallucinations and losses of vision. In an effort to escape their worries, the couple heads out of town to a country guesthouse owned by local pharmacist Paul (Simon Cotton), who attempts to help Gemma and Will control their psychological attacks.

The film is currently slated for a limited theatrical release on May 17, with a VOD rollout to follow. Subliminal Films has also announced plans to re-title the
film as AMAUROSIS, in reference to the medical condition describing blindness caused by non-optic factors. TriCoast Worldwide is handling international sales on behalf of the filmmakers.