In their earliest incarnations, slasher films set themselves apart from the average horror film of the time by embracing a certain semblance of realism. Prototypical slashers such as Psycho, Peeping Tom and Texas Chainsaw Massacre utilized a human killer in the place of monsters, ghosts and demons to instill fear in the audience.

John Carpenter’s Halloween was the turning point in the development of the slasher film. It distilled the concept of the human killer down to its most bare essentials and laid the groundwork for the slasher boom that followed throughout the 80’s

There was however one wrinkle Carpenter threw into the mix at the end. Throughout Halloween Dr. Loomis rants and raves to the authorities that Michael Myers is not human at all, but is pure evil. In the final scene, after being pumped full of bullets and having fallen from a second story window, Michael’s body is nowhere to be found. We’re left to believe that Dr. Loomis’s assertions are not hyperbole. Michael Myers is in fact pure evil, and he’s still out there. It was an early example of the slasher delving into the realm of the supernatural.

In the slasher craze that followed, the general slasher formula stuck with the idea of a human killer. They followed a template quite similar to the Giallo films, as well as Agatha Christie’s And Then There Were None: An unknown killer is picking off the characters one by one, and the Who and Why will be revealed at the end.

It was a successful formula, but quickly the formula grew stale, and producers felt the need to add a little more flair. Following Carpenter’s lead, the supernatural crept its way in.

Friday the 13th was arguably the most successful and well-known slasher franchise that emerged in the wake of Halloween. The imagery of the hockey masked Jason Voorhees is nearly synonymous with the genre. Jason has risen from the dead so many times that by now it’s easy to forget that the first several films in the franchise feature a human killer.

At the end of the first film, it is revealed that Pamela Voorhees is behind the murders, seeking revenge for the drowning death of Jason, her son, thirty years prior.

In parts two through four, Jason himself takes up the mantle and any semblance of the murder-mystery framework is thrown to the wayside. 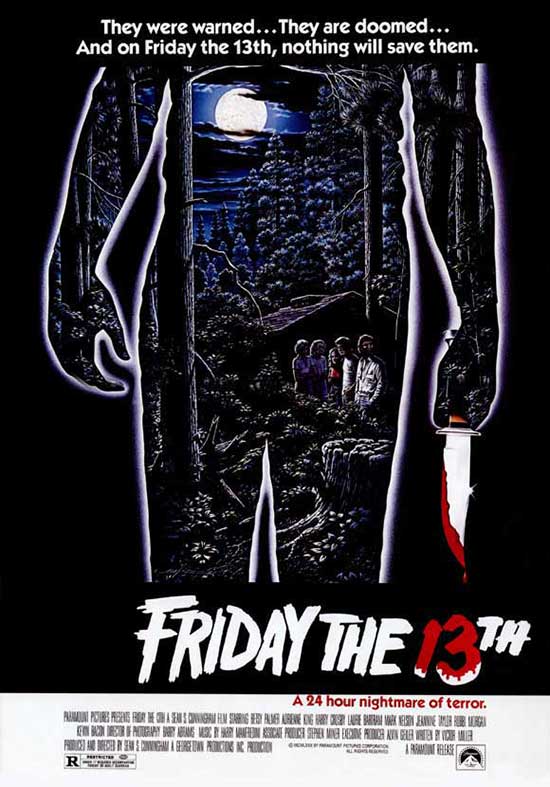 There’s some debate about when exactly Friday the 13th became supernatural. Was it at the end of the first film when Jason rises from the lake, or was that just a dream? Was Jason immortal in the events of Part II or did he merely possess incredible strength and endurance?

By the time we roll around to Part VI it’s fully accepted by the audience and the creators that Jason is in fact undead and will not be put to rest any time soon. All pretense of realism was abandoned, and the franchise became firmly embedded in the supernatural.

The original Prom Night is a seminal entry in the first wave of slashers, arriving mere months after the release of Friday the 13th. Prom Night, unlike its predecessors, follows a strict murder-mystery template.

A group of children accidentally kill their friend in a freak accident while playing. They cover up their responsibility and swear to remain silent, allowing the death to remain a mystery. Several years later, on Prom Night, a mysterious person makes threatening phone calls to those responsible for the death. Following the threatening calls he takes his revenge. 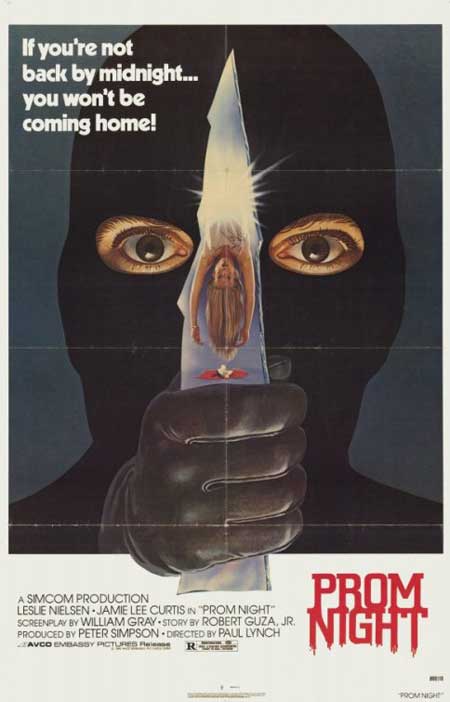 The sequel, Hello Mary Lou: Prom Night II (1987) promptly disregards any pretense of mystery or realism. We are introduced to the titular Mary Lou, a Prom Queen who was set ablaze in 1957. In 1987, Mary Lou returns to telekinetically strangle high schoolers, and to weaponize lockers with the power of doo-wop.

Silent Night Deadly Night holds a strange place in the pantheon of horror. It’s reputation is mostly overshadowed by its over the top sequel, but the original film poses an interesting twist on the genre. Rather than focusing on the victims, Silent Night Deadly Night follows the story of the killer, Billy. We view his life of trauma and abuse and witness his descent into madness and his eventual murder spree.

Even the notorious sequel, featuring Billy’s surviving brother Ricky as the killer, maintains the theme of psychotic killer and doesn’t invoke anything supernatural. It fails miserably in its attempt to be horrifying, but the supernatural is nowhere to be found.

It’s in Silent Night Deadly Night Part 3 where supernatural elements are first introduced. After the apparent death of Ricky in part 2, we find Ricky is in a coma and has developed a psychic connection to a young woman. This link compels the awakened Ricky to kill the woman he’s connected to, leaving a trail of bodies as he pursues her.

Part 4 takes the supernatural a step further, with the plot eschewing the killer Santa concept altogether and instead focusing on a coven wreaking havoc in Southern California. There is a character named Ricky (played by Clint Howard) though it is left unclear if this is intended to be the same Ricky from the prior entries.

Most slashers began realistic premises, and only began to introduce the supernatural as more sequels were put into production. There were a some films however, that dipped their toe into the fantastical upon their climax, much like Halloween before them.

Pieces has a reputation for being among the sleaziest, cheesiest and most ridiculous slasher films of the early 80’s. And it’s a reputation it deserves. It revels in all the criticisms leveled at slasher films at the time: It’s absurdly violent, offensive to the senses, portrays women in peril as entertainment, features gratuitous nudity and terrible acting. It is fundamentally void of any artistic credibility or technical skill.

It’s something of a masterpiece. 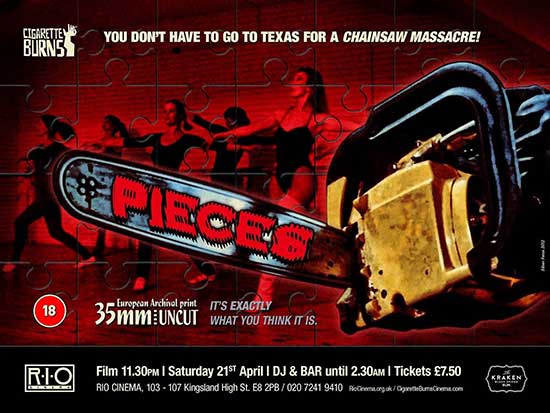 The story concerns a killer stalking a college campus in Boston, dismembering young women with a chainsaw. He leaves the bodies where they were killed, taking only one body part with him as he leaves.

In the end it is revealed that he is taking the body parts to stitch together a woman with the individual pieces.

Before the final credits roll, there is one more surprise left in store for us. With the killer stopped and the mystery solved, the hero takes one final moment to take a glimpse at the stitched-together cadaver. As he starts to leave, the body comes to life and grabs hold of him, with a strong, tearing grip upon his manhood.

It’s a bonkers conclusion to a ridiculous movie. It’s a supernatural twist thrown into the mix with no rhyme or reason or any legitimate connection to anything that came before it. It doesn’t make any sense and it’s absolutely perfect.

Much like Pieces, Maniac is a thoroughly sleazy affair. It is dark, nasty and violent, but wholeheartedly devoid of the humor and fun which permeates Pieces. It is a distressing film to get through and it pulls no punches. It follows the life of Frank Zito who stalks the streets of New York City, scalping prostitutes and placing the pieces on his collections of mannequins.

At the conclusion, as Zito is in the thralls of mental anguish, the mannequins come to life and tear Zito to pieces. 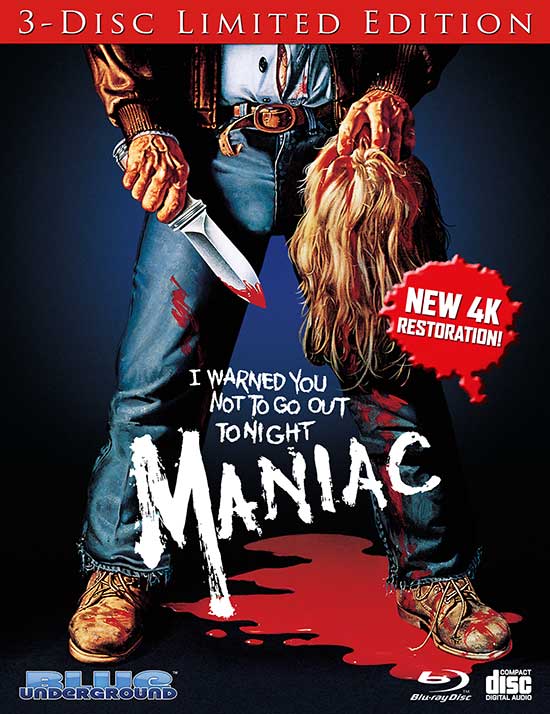 It could be debated that the ending is meant to be symbolic of Zito’s mental decay, as there is one more scene where police find his dead body, noticeably not dismembered. It’s on the very final frame, however that Zito’s body opens his eyes for one last shock scare, not unlike the ending of Friday the 13th or Pieces.

The strength of the slasher film, resides in its simplicity. All that’s required is a killer armed with a bladed weapon, preferably one that gleams in the moonlight. But sometimes, when the well runs dry and it seems the formula has reached its natural conclusion, a dash of the supernatural is exactly what’s needed to keep things fresh.

And if not fresh, then at least entertaining.