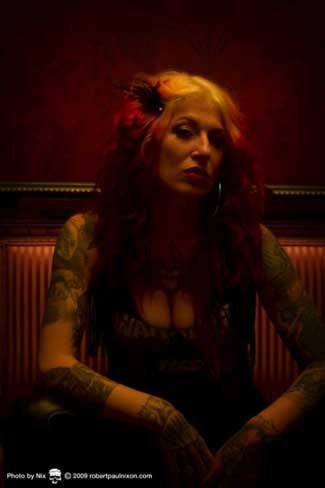 And now, with no further ado, I have something extremely special and sinister for your dark hearts. The incredible Jovanka Vuckovic is a former editor of Rue Morgue Magazine, Canada’s premiere horror publication. She is now a mother to a beautiful baby ghoul and wife to a killer musician,  Redeemer’s Shane Faulkner. But through all of the gifts and changes life has thrown in her way, Jovanka has decided to take away whatever spare time she has available and create a new vision of horror called The Captured Bird. The story follows a little girl who enters a dark world after drawing with chalk on the concrete of a playground. The film concept is being praised by many including Executive Producer, Guillermo Del Toro. Even though Jovanka has never directed before, she has assembled a team of huge talent to help her create the film, and just recently she has embarked on her own Horror Film School where she speaks to and receives advice from masters including George A. Romero. So sit down in a comfortable chair, drop your H. P. Lovecraft literature, and listen to what one of horror’s future auteurs and most important females in the genre has to say about her project The Captured Bird, journalism, and zombies!

Horror Talk: According to you, The Captured Bird is slightly based on nightmares that you had as a child. Can you pinpoint the exact moment you had these dreams and if so did you document them or were they just something so vivid they stayed with your adult psyche?

Jovanka: I suffered from chronic insomnia and night terrors for many years. In fact I still do, albeit less severe. But when I was a kid, I had a lot of recurring nightmares – one of them even inspired by the intro from Dr. Who believe it or not. So there is definitely something to be said about not letting your kids watch scary stuff on television when they’re too young. Trust me, those images embed themselves in the folds of the psyche and stay there. Anyway, this is going to sound weird but once in a while, my twin brother used to “share” his nightmares with me. I’d wake up having had a dream about people I didn’t know only to find out they were Jovan’s friends!

It’s weird thing, being a twin. And everything they say is true – you have a psychic link, especially when you are close as Jovanka and I were. More than once he had this experience with what I later found out are referred to as Old Hag Syndrome, in which he would wake up from a dream being held down, immobile, by some black, shapeless thing and there would be the definite understanding that there was another one in the room, watching from a corner. It was absolutely terrifying to experience this via my brother. We’d discuss the “beings” and kind of figured out what they looked like and I noticed I could also see them during the day – just out of the corner of my eye. Later, I found out a lot of people see these entities – they are called The Shadow People. I used to write down and attempt to draw my dreams but not these – these figures were so vivid that it wasn’t necessary. Do you ever see something black and shadowy moving just outside of your peripheral vision? That’s them. That’s the shadow people. Of course, there are scientific explanations for this phenomenon which include hallucinations suffered during sleep paralysis, but try explaining that to a little kid who is dreaming someone else’s dreams. . . . 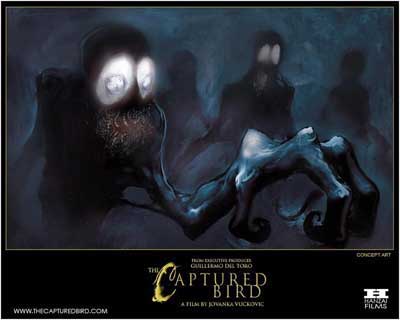 Horror Talk: As you state in your personal introduction on www. TheCapturedBird. com, you will be conducting interviews with writers and directors to gain more insight into directing your first film. Who are the individuals you intend to correspond with and why did you choose them?

Jovanka: Since this is my first film, it is effectively functioning as my horror film school. I thought, what better people to “school” me than the Masters of Horror? I’ve got a great line up of genre legends, but we’ll be beginning with George Romero because a) he has a ton of experience making independent horror films and b) he’s now living and making films in Canada – Toronto to be exact – so he has some very practical advice to give me. I hope to get started on those this week. It’s just been a very busy time for me with the birth of my daughter Violet, among other things.

Horror Talk: The Captured Bird as an unfilmed concept already has so much buzz throughout the industry. It has been accepted by a majority of film festivals and the directors who have supported the project through their testimonials are all true horror masters. Do you think this is because of who you are and what you have contributed to the genre?

Jovanka: One of the wonderful things about the horror industry is that it’s a family atmosphere. For the most part, you’ll find that people are very wiling to help others. Of course, as in every industry, there are soulless people who just want to step on others to get ahead, but I find that the majority of genre types want to help each other. And that is evidenced by the fans that have already contributed to The Captured Bird – either through a donation or by offering up their skill in helping me shoot the movie. A lot of those directors have become friends through my years at the magazine so they were more than willing to offer up a testimonial to help give the film a little extra push. I’m extremely grateful for everyone’s support. I hope I don’t let everyone down! 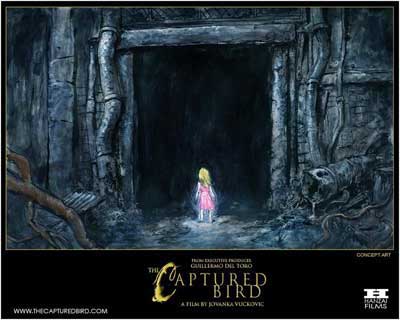 Horror Talk: Do you yourself think that you are an important icon to the genre?

Jovanka: Oh hell no, I’m just a gal trying to make a horror film. You’d have to be a conceited a-hole to think that you’re something special just because you edited a magazine. In fact, there’s probably a lot of pressure on me to make something really impressive because I spent so many years being a film critic. But you’ll notice, I spent more time at the magazine “celebrating” rather than “criticizing. ” It’s easier to bash movies than it is to compliment them. I tried not to fall into that trap as a critic, so I fell back a bit and let the writers review movies and I stuck more to features and editing the rest of the magazine.

Horror Talk: You’re an inspiration to me due to the work that you have done with Rue Morgue Magazine. Your writing was always intellectual, honest and extremely personable – especially when it came to the loss of a legend like Forrest Ackermann or Maila Nurmi. Do you ever miss anything about writing for a monthly publication?

Jovanka: Not really, to be honest. I never set out to be a magazine editor, but it was kind of a really fun detour for me. I found the monthly deadlines to be a real drag. With the exception of Christmas (which I didn’t even celebrate), I didn’t get a holiday off for six and a half years. They always seemed to fall on weeks when we were in production on the mag. I think it’s a job that can cause real burn out for a lot of people – except for maybe Tony Timpone who did it for what – 20 years plus? That seems inhuman to me! [Laughs] I’ve always been a writer and an artist and I felt a deep desire to create that wasn’t being fulfilled by writing about other artists work. I’ve always wanted to write fiction, screenplays, paint, tattoo – you name it. I wanted to try it all. I wrote and illustrated my first book when I was 8 years old. It was a choose your own adventure book in which you died no matter which road you chose. So for me, creating is much more than a want – it’s a NEED. But that’s the great thing about changing careers so many times already – you come to realize that you really can do anything you put your mind to. You just have to believe in yourself and commit to it. Work hard and make it happen. 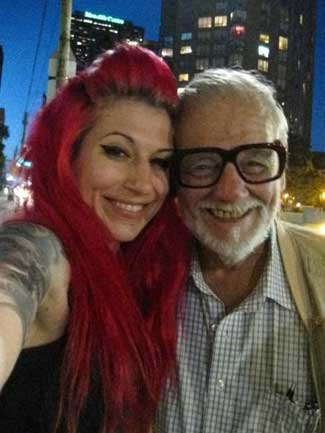 Horror Talk: My last questions are about your soon-to-be-released book on zombie history – Zombies! An Illustrated History of the Undead. What kind of research did you undertake for the writing process?

Jovanka: Oh good lord, well, I had about three months to research, write and source images for the entire thing! It was pretty crazy. I needed something to do during my last – and most uncomfortable – trimester of pregnancy. The publisher approached me to write this book and I thought – why not? Then I got started and realized just how much work a book like that is. Wow! I’ll never agree to do a book like that in three months ever again! Especially while 7 months pregnant. Anyway, it’s definitely not “definitive. ” You can’t possibly do that in less than 200 pages. There are just too many zombie movies out there, but I tried to hit most of the important (and some that you’ve never even heard of) ones in it, . This is more of an overview – intended for all readers, not just horror fans. It starts with the early origins of the zombie and goes all the way to their current place in pop culture – they’re everywhere: in video games, comic books, music, even organized zombie walks. There is no monster more prolific, not even the vampire.

Horror Talk: Do you feel that you were always board certified to recount the time line of the undead in cinema?

Jovanka: Well I’ve seen a sh*tload of zombie films – especially now that I’ve written that book. I think I’d be okay if I never saw another one now! I’m kidding – a little. I guess I became an expert on the genre by writing about it every day for so many years but I can definitely say I’m an expert on zombie cinema now. For whatever that’s worth. . .

Horror Talk: Do you feel that everything has already been done when it comes to zombies or are there any fresh new ideas left?

Jovanka: Just when you think it’s all been done before, a film like Slither, [Rec] or Pontypool, or a comic book like The Walking Dead, comes along to remind you can teach an old dog new tricks. The zombie is a pretty malleable creature, which is part of its enduring strength as a movie monster. 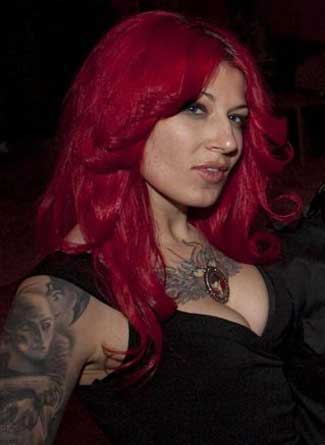 Horror Talk: What would you like to personally see in a zombie project in the future?

Jovanka: I’d like to see the zombie become genuinely scary again. It hasn’t really been frightening – for me at least – since Day of the Dead (1985). But at the same time, I had a blast watching Zombieland when it premiered at Fantastic Fest in Texas. I guess, when it comes to zombies, I just expect to be entertained. As Tom Atkins was fond of saying in Fred Dekker’s Night of the Creeps, “THRILL ME!”

You can now see what the concept of the film is about at THECAPTUREDBIRD. COM. More importantly, you can help support the production by helping with a small donation, but believe me, with your little bit of support you will help give birth to something really special!Thanks again Jovanka, it was truly an honor to speak with you.