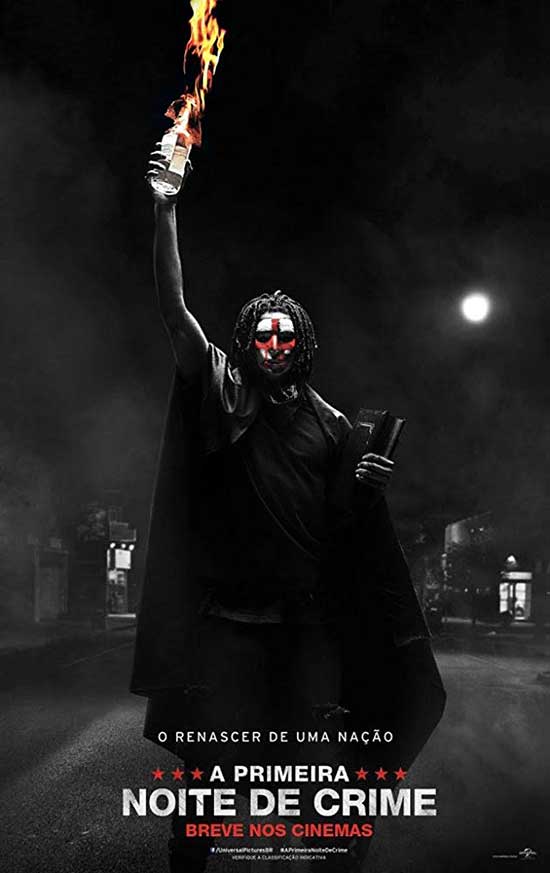 After a radical third party emerges victorious in American politics, they decide to push a plan to limit crime to a 12-hour lawless period, which they test on a small section of Staten Island. Offering $5,000 to participants, the group plans to make this first purge a success . . . one way or another.

The First Purge (2018) is director Gerard (Burning Sands 2017) McMurray’s first foray into the franchise, and retains screenwriter James DeMonaco of the first three Purge films at the helm of the script. While portrayed as a prequel to the other films in the series, The First Purge forgoes much explanation of how America arrived at such a terrifying state of affairs, and instead narrows in on a group of black neighbors struggling to survive the first purge. While quite sparse on horror and believable dialogue, The First Purge nonetheless features a quickly-paced plot with some worthwhile social commentary. 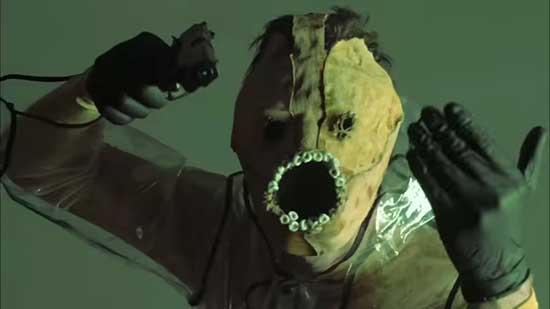 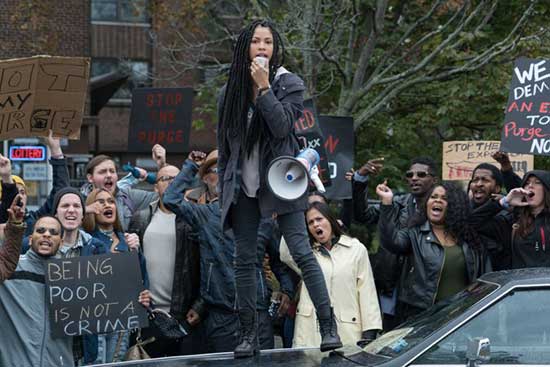 The stars of the film are Y’lan Noel (Insecure series 2018), who plays Dmitri, the up-from-the-gutter kingpin who both protects and poisons his own community, and Lex Scott Davis (Superfly 2018), who plays Dmitri’s ex-lover and political activist-opponent Nya. Joivan Wade (Cyborg in DC Universe’s upcoming Doom Patrol streaming series) plays Nya’s younger brother Isaiah, who secretly plans to run drugs and make bank on the first purge in an effort to get them out of the ghetto. Ruining his plans is psychopath and scarification-aficionado Skeletor, played by Rotimi Paul (Mapplethorpe 2018). 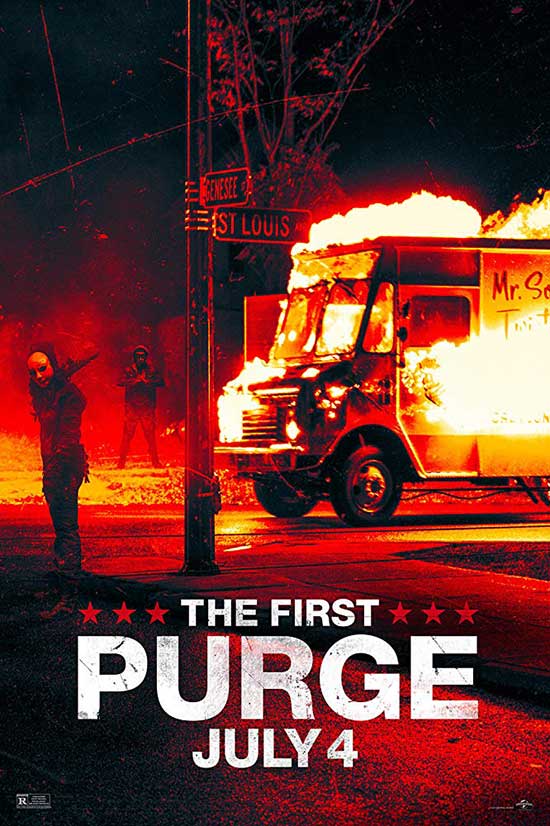 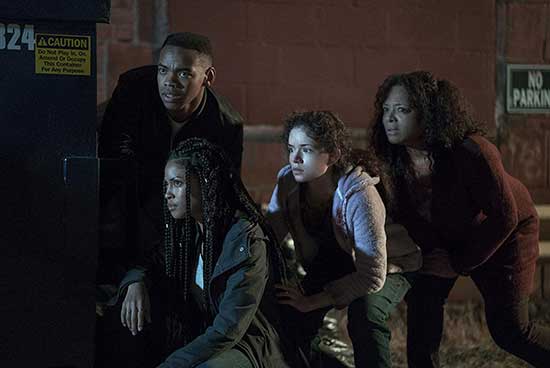 In a thin effort to include some origin-story material for the franchise, the movie also includes Marisa Tomei (Slums of Beverly Hills 1998, Spider-Man: Homecoming) as the scientist-brainchild of the purge. Her role, and those of the minor players around her, are included only to show the government’s naughty behavior in tainting the experiment to further screw the less-fortunate. It’s not a bad message to try and convey in a film series centered around civil unrest, but the attempt is both heavy-handed and shallow. DeMonaco could, theoretically, have gone a much more political-thriller route with the concept, but far be it for this gore-hound to blame him for seeking the horror avenue instead.

This train of thought leads one to consider McMurray’s directing, which is also lacking in impact. It’s certainly serviceable—the actors are clearly visible, the sound professional, and some of the design choices (such as the glowing irises for those wearing video-camera contacts) are suitably creepy. Yet the parts that matter most in creating gut-wrenching discomfort and tension, such as the visceral assault, and moments where the audience is forced to endure heart-breaking scenes of death, are dealt with quickly and cheaply. The choreographed fights in the final scenes of the film are perfect examples; what ended up as slick, martial-arts style moves could have been bone-crunching street fighting instead, and the blood effects are truly awful CGI affairs.

While the cast mostly does their part—Paul is great as the spitting, over-the-top Skeletor—the dialogue is weak, and the stereotypical characters fail to give much gravity to the red-state corruption subplot. Likewise, part of the fear of the Purge series has come from the feeling of hopelessness when facing mayhem on a massive scale, and this film oddly tries to end on hope. While I personally enjoy a happy ending now and again, a film that’s supposed to be a prequel to escalating horrible events seems as though it should end on a big, ominous downer. The mismatch in tone at the film’s conclusion thus results in more head-scratching than relief. 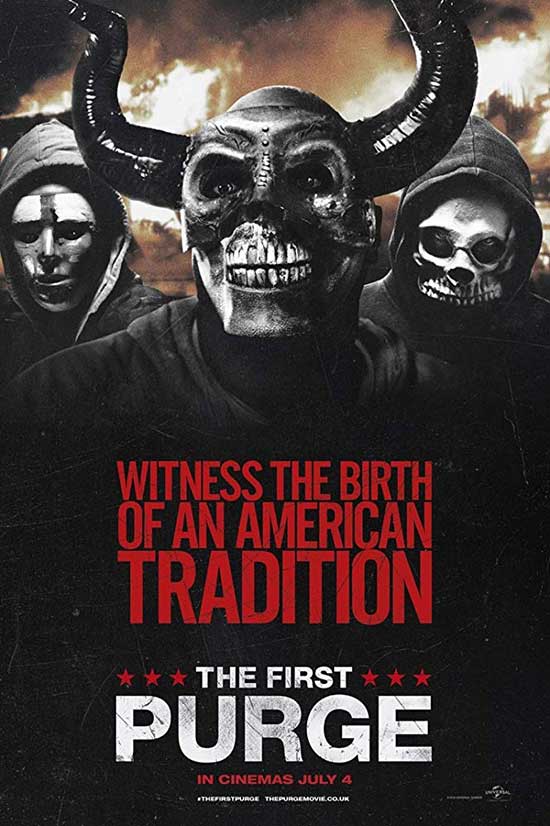 Ultimately, The First Purge succeeds in being entertaining, and will certainly be a fun party-favor for anti-Trumpers who like their social satire extreme but shallow (if you don’t believe this interpretation, check out the film’s MAGA-hat teaser poster, which is far more sublime than the film itself.) However, the hope that the newest entry into the Purge franchise would increase the intellect and deliver disconcerting and thought-provoking content in equal measures should dismissed now; it’s just not there. 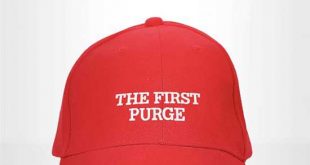