Welcome! Welcome to the coolest (I’m not kidding, it’s freezing in here) Mausoleum you could find yourself in. The one in which I, The Black Saint call home. If you are members of my ever growing legion of acolytes you should be on your knees right now awaiting my words of wisdom & news from the wacky town we call Horrorwood. If you’re not an acolyte yet…you will be soon enough so kneel down anyway! Kneel & listen to the latest scuttlebutt that I have dug up regarding all that is Horror & maybe a little that isn’t but might interest you anyway. Now…Kneel & be quiet. I feel some news coming on..

There is a spec script that has gotten a bit of notice as of late in town called “Costume” & was written by Carter Blanchard. The concept is simplicity itself…On Halloween night a costume surfaces & whomever was this costume is possessed by it. In other words the killer can’t die! That sounds cool & it would seem to lend itself into becoming a new Horror franchise. With the “Saw” franchise supposedly biting the dust next month this sounds like it could become a yearly event much as “Saw” was. Anyway Blanchard has also written “Dead asleep” for director Jonathan Liebsman/New line Cinema & “Near Death” which is set up at Fox Searchlight.

Speaking of spec scripts, There’s another one making the rounds called “Zombies Vs. Gladiators” that is causing some slight tremors in Horrorwood. Written by Greg Ostrin & Michael Weiss it takes place in ancient Rome where an outbreak of zombies are on the attack & a group of gladiators gather together to save the city. It’s being described as “30 meets 28 Days Later” by those who have read it. I don’t know about you guys & I haven’t read the script myself but I think this whole “Zombies vs. everything” mentality that started with those ridiculous books such as “Pride & Prejudice & Zombies” etc..is becoming a little ridiculous. That’s not to say that it’s not a good script. I’m just saying that even though it might sound conceptually interesting, without a good script & a good director it sounds like straight to DVD fodder to me. I guess the days of Romero’s slow, shambling & honestly frightening Zombies are long gone….excuse me if I shed a tear for what was.

Our friends over at Bloody-Disgusting.com have a contest running 7 the prize is a special survival prize pack that will give you a smidgen of light in your final moments. Just send an email to submit@bloody-disgusting.com & put BURIED in the subject line. Write down your full name 7 address 7 answer these 2 questions: could you be buried alive for 24 hours? & What’s your biggest fear? The Grand prize (of which there is only one) is a BURIED one sheet, 1 branded Zippo lighter, 1 flashlight key chain, 1 BURIED soundtrack & 1 novelty BURIED coffin box. Two runners up will win a BURIED one sheet. The winners will be chosen at random on October 1st so get to writing people!

Zennie62.com reports that the forthcoming 3D(ugh) remake of Godzilla will be in the same vein as…”Batman Begins” & “The Dark Knight”. Huh? They do know what Godzilla is right? I can’t even conceptualize that statement quite honestly although I realize the original “Gojira” was a pretty dark movie for it’s time. But that’s because it was basically a metaphor for the horror of the atomic bomb dropped on Hiroshima. Not because Godzilla was a brooding sociopath who dressed like a bat & fought crime. There will also be another monster in the film that the big G will be battling which means this isn’t a remake of the original Godzilla or even a remake of the crappy Roland Emmerich “Godzilla”. Those 2 featured Godzilla & Godzilla alone vs. Mankind. I’m not holding my breath for this one at all folks.

Tonight’s episode of Entertainment Tonight will air a segment on Wes Craven’s “Scream 4” including interviews with the cast & some behind the scenes ghost face footage. This news comes to us from our good friends at Fangoria. Check your local listings for when you can actually watch the episode. But it’ll be online tomorrow anyway & I seriously doubt any big news is gonna be divulged. It’ll be Courtney Cox & a couple of other talking heads saying how “Scary” the movie is going to be & nothing more most likely…

And the winner is “Jasper” directed by Elizabeth B. Schieffer of Dallas, Texas. You can see it & the other finalists on the Halloween Horror Nights Website: www.halloweenhorrornights.com/hollywood/2010/film_contest.html “Jasper” is a pretty f*cking awesome 3 minutes of fright!!

“An Evening with Guillermo DelToro” 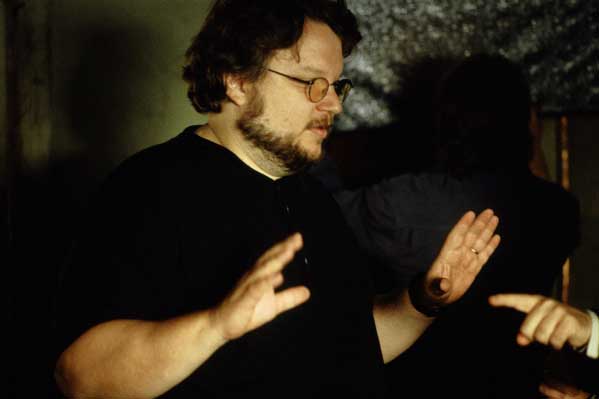 Last night I was amongst a privileged few to sit & have a “Town Hall” style meeting with “Hellboy 1 & 2” director & Author Chuck Hogan to discuss their new book: The Fall. It’s the 2nd of “The Strain” trilogy dealing with man kinds battle against a new kind of vampire. One who isn’t romantic, who isn’t in love with any ditzy blond. These are VAMPIRES people. Ones who look at us as food & food alone. And they’re not really big on biting our necks, at least not in the conventional way. First of all let me state that I have met a lot of “Celebrities” of the Horror genre. The majority of them were extremely cool people who were doing what they loved & were happy to make a decent living doing it. A few of them were f*cking pretentious assholes who suffered the attention of their fans. I wonder if they ever realize that without the fans they’re nobodies? Let me just say that Mr. DelToro is one of us. By one of us I mean a fanboy. I’m proud to be called a fanboy & don’t care what people think of it. Those who think lesser of me because of it would never say it to my face for fear of facial rearrangement. I don’t f*ck around. You be you & I’ll be me & we’ll get along nattily. Mr. DelToro just happens to be one of the few fanboys who hit it big. And let me tell you the man’s imagination knows no bounds. To listen to him talk is to listen to one of your friends after a cool movie & discuss what was wrong with it & what was right with it & how you were going to make your movie.

He spoke of his plans for a retelling of the “Frankenstein” mythos. His plans for “At The Mountains Of Madness”. Both of them are in the pre-production phase as I write. He told us of how his Frankenstein will be “Unlike any Frankenstein ever seen” & of how the creatures in “At The Mountains Of Madness” will be like no creature ever seen on film…..ever! He spoke of his childhood & how he read an encyclopedia of Biology 7 learned about the human body & all of it’s various permutations. He studied an encyclopedia of Psychology to learn about the human mind & how it can just go bad in certain individuals. But mainly he spoke of his love of film & how much it meant to him to be a filmmaker.

About how all of his films are his children & how he keeps “Books” on each one of his films just as a fanboy would..to satisfy the fanboy in him. He is an immensely humorous individual with absolutely no pretensions whatsoever about what he does & why he does it. He told of the first film that scared him (Onibaba) & why he was producing the remake of “Don’t Be Afraid Of The Dark”. One of the scariest made for television films ever produced. It starred Kim Darby & Robert Hutton & a whole lot of evil little gremlins. The ending of it is still terrifying to me to this day. Look for the teaser online, it will absolutely kill you. I told him about how he inspires me as a writer to continue to write, good or bad but writing nevertheless. And how he forces me to look to my imagination to flesh out my writing.

My daughter (Who happens to share the same name as his daughter told him of her absolute joy every time she watches “Pan’s Labyrinth” & the tears that she sheds at the end of it. We spoke of our love of Mexican wrestling movies from the sixties (I happen to share a name with the most popular Mexican wrestler/movie star of all time). He got off on that so much that as he signed the copy of “The Fall” I had brought along for him to (Hopefully) sign, He drew a picture of that same wrestler on the inside cover of the book along with his autograph. Something I will treasure forever. He even went so far as to give me his Email address! And let’s be clear here…I would never be so bold as to ask anyone of his stature for their email address.

But he gave it to me & asked me to keep in touch. Which I will. The only other celebrity that I can think of that I have a relationship akin to this one is Clive Barker’s & that took years to cultivate. Guillermo & I hit it off within minutes. I will speak more of my session with Guillermo DelToro in future columns but I would like to add that his co-writer on all 3 “Strain” books is Chuck Hogan who, unbeknownst to me wrote the novel that the current #1 movie in America “The Town” is based on. He too was as accommodating as can possibly be & I’m ordering all of my acolytes to see “The Town” this week & keep it #1 at the box office. I’m going tomorrow to see it & After talking with Mr. Hogan, I can’t wait.

I think I’ve given everyone enough today to satiate you all until next time. So let’s not forget to double knot your laces when you tie your sneakers..just to be safe. Always do what your Mother tells you to do. Remember you only get one of em’ so take good care of em’ but most of all remember, before you lay your head down on that comfy pillow to go to sleep. Kneel down…kneel down & say your prayers, To ME!!!