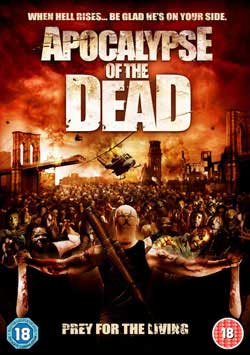 A group of Interpol agents have the task of transporting a dangerous prisoner to Belgrade. Unfortunately for them, their job becomes more difficult after a chemical (that looks just like the Joker’s deadly laughing gas from the 1989 Batman movie) is accidentally released and turns everyone exposed to it into flesh eating zombies. Our heroes soon find themselves fighting for their lives as they as they try to make their way through the ever-growing horde of zombies.

-“Apocalypse of the Dead” (aka “Zone of the Dead”) is just basically another zombie movie and there is nothing really special or original about it that sets it apart from countless other films. I’ll admit that it is extremely difficult to do anything new with the zombie genre, and while some films at least try to do something a little different that just isn’t the case here. It is you basic, by the book zombie flick about a group of people being picked off one by one as they try to survive an army of the undead. If you’ve seen any other zombie movie (and Lord knows there are tons of them) then you’ve pretty much already seen “Apocalypse of the Dead.” I can’t really recommend running out to rent it unless you’re just a hard core zombiephile or someone who wants to see every zombie movie that comes along.

The movie has a simple formula and pretty much plays out as such: Zombie attack someone. Someone shoots a zombie. Our heroes run for their lives. Zombies attack someone. Repeat as needed. I know that most zombie films don’t have a great deal of substance when it comes to storyline, and this is especially true when it comes to “Apocalypse of the Dead.” The script is wracked with clichés (Ken Foree’s character is only a few days away from retirement.

Before the zombies attack and all hell breaks loose he makes the point to comment about how he has only ever had to use his gun on assignment twice before, the prisoner they are transporting really isn’t the bad guy everybody thought that he was, etc). There was actually a point when I thought that Foree was going to say “I’m too old for this sh*t!” ala Danny Glover from the “Lethal Weapon” movies. Of course we also have the old “everyone is surprised when someone is bitten and turns into a zombie” routine. Have they never seen a zombie movie before?

The acting is pretty bad and other than Foree and Kristina Klebe (who pretty much just phone in their performances too) everyone else should feel ashamed of themselves for their “acting.” The guy running around spouting religious phrases was insufferable (I could not wait for him to die so I wouldn’t have to listen to him ramble on anymore), and the Prisoner (that was all he is ever called as he never actually says his name) is just laughable. He is supposed to be mysterious and charming (I think) but Emilio Roso, who plays the part, fails miserably on both counts and as a result the character is pretty much a joke. Though it may not have had the worst acting I’ve ever seen it was pretty damn close (I’m sure you’ll agree around the third time the religious nut starts talking about the “End of Days”).

Not everything is horrible about the movie. The zombies look pretty good considering the low budget of the film and I liked the fact that they ran and didn’t just stumble along slowly like zombies have been known to do in other movies. There’s quite a bit of action (after the incredibly slow pace of the first 45 minutes or so), and the big battle at the end is pretty cool. I also enjoyed all the violence and gore that the film provided as well, as there is an ample supply of both which helped keep me interested.

I saw somewhere online where someone made the bold statement that this was the best zombie movie since the remake of “Dawn of the Dead,” and I have a great deal of trouble agreeing with that. As a matter of fact, I am even willing to say that the “remake” of “Day of the Dead” was a much better film than this one (I don’t know why the “Day” remake takes so much crap, I actually liked it). I also want to point out that this film has no connection to an of Romero’s movies despite the title and it reminded me more of a “Resident Evil” game than anything else. Why I wouldn’t say that it was the worst zombie movie ever made (that honor belongs to “Zombie Nation”) I can think of a slew of others that are much better. Check it out only if you are a huge zombie fanatic or if you are just looking for a way to kill an hour and a half and there is nothing else on TV.

Tags Apocalypse of the Dead zombie