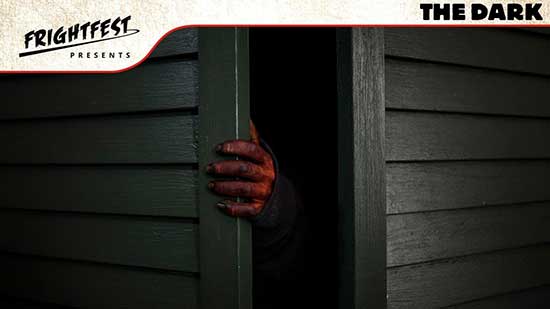 THE DARK is based on your Columbia University thesis short film. Was it a difficult process expanding it into a full-length feature?

I never really saw this as a traditional short-to-feature type of deal, to be honest. My thesis film was my first real foray into genre filmmaking, so it was very much a trial-and-error process for me, almost like a sketch, in which I wanted to see what my version of a horror film would look like. Luckily, the short had some success on the festival circuit, which gave me the confidence I needed to launch into writing the feature. Some of the ideas from the short definitely carried over, but ultimately it feels like a totally different film to me.

You shot the film in North Ontario, Canada, but what’s the Austrian connection?

The film’s connection: the Austrian production company DOR Film were the primary producers, and the film was majority-financed by Austria, which makes it an Austrian film. While we initially intended to shoot in Austria, later in the process I was talking with my acquaintance Robert Eggers about his experience making THE WITCH, and he made me aware of a production incentive in Northern Ontario they had accessed, called the NOHFC. I brought it to DOR’s attention, and they ended up exploring the incentive, and eventually linked up with the Canadian production company First Love Films and decided to move the production to Canada.

As for my personal connection: I met Executive Producer Florian Krügel while we were both studying at Columbia University’s Graduate Film Program. There we became friends and collaborators, and even though Florian ended up leaving Columbia early to return to Vienna and continue his studies at the Vienna Film Academy, we wanted to continue working together, so he went on to produce all of my student films as well as develop the script for the feature version of THE DARK. It was through Florian that I met Klemens Hufnagl, as well as several of my other

Austrian collaborators, who I consider to be like family. So it was important to me that we all make THE DARK together, and I was ecstatic when Florian was hired by DOR Film and they optioned THE DARK as the first feature film he would oversee at the company. 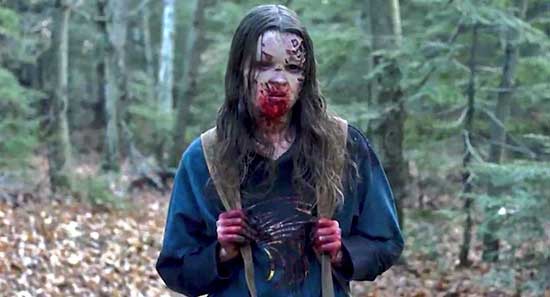 Klemens Hufnagl is credited as your cinematographer and co-director, how did that union work exactly?

Klemens and I have been working together as DP and Director respectively for years, so at this point we’re not only collaborators, we’re really good friends. As I mentioned, for most of the development and pre-production process, we planned to shoot the film in Austria, as a German-language film. I’m far from fluent in German, and even though I directed a student short film in Austria a while back that was German-language, I realized a feature film is a different animal altogether. Luckily, Klemens and I have a pretty seamless working relationship, so I really relied on him to help me through the Austrian prep – whether it be the painstaking process of going

through the script line-by-line in order to translate it to German in a way that didn’t lose any of my specific intentions, helping me translate my vision for the film to a more authentically Austrian setting, or participating in the German-language casting process. All of which changed once we moved the production to Canada, at which point we were able to return to our normal routine of focusing our collaboration on achieving the desired look of the film. But regardless, it was important that Klemens be credited for the work that he did.

What was the look you wanted to achieve?

So much of the film is from Mina’s perspective. My priority with my storyboards was to design a visual language that created a strong subjectivity for Mina, so the audience would more easily align with her. I was also interested in reflecting Mina’s slowly expanding world, so in the beginning things feel slightly claustrophobic, and then as the kids break out of the woods the world starts to open up. Lastly, the fact that Mina and Alex are on screen so often, and they look the way they do…it was important to me to find ways to balance things out so that this story still felt like it was

of our world. It was like walking a tight rope. Both the minimalistic sound design and the camera, during the present day sections of the film, reflect a sort of realism while still maintaining the ability to depart with some subtle flourishes. But then, during the flashback moments where we’re totally in Mina’s subconscious, we were able to let loose and play a bit more, both with sound and look. 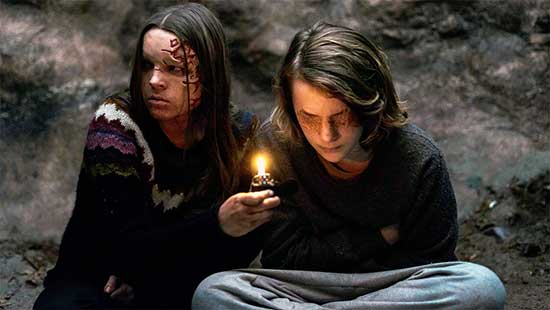 You’ve said LET THE RIGHT ONE IN was a big influence. Anything else?

I grew up in a pretty strict household that didn’t allow me to watch a lot of things, horror films included. Whenever I did get the chance to see a horror film at a friend’s house, it would torment my dreams endlessly, so when I started writing and making my own films, I never felt like there was a place in horror for me. But then I went to film school, and was introduced to movies like LET THE RIGHT ONE IN, PAN’S LABYRINTH, DEVIL’S BACKBONE, PSYCHO…they were like a gateway into this whole new storytelling world for me. They sort of invited me in to play, and I haven’t looked back since.

Horror is all around rather than the monster simply residing in the main character, Mina, so THE DARK is primarily a genre reversal?  As much as I loved LET THE RIGHT ONE IN, after watching it I was left with this nagging question: what would the film look like from the perspective of Eli? It was like an itch I couldn’t scratch, and even though THE DARK wasn’t even on my radar at the time, I think that was the earliest seed of the film. I was interested in seeing a horror film from the monster’s perspective – and not only that, but also having an emotional journey with her. Part of that was finding the monster whose anger I could fully share and become consumed by, and that was Mina. The other part was seeing the world the way she sees it – this unfeeling, dangerous place, where everything is sort of a mirror for the source of her anger. Everything except Alex.

Aside from the zombie horror trope, THE DARK is really about two victims of abuse finding a common empathy and bonding together?

Very much so. At this early stage in my career, abuse and the cyclical nature that seems to go along with it, have been common threads that run through much of my work.

You call THE DARK a twisted fairy-tale?

There’s always been a certain fairy-tale quality to it for me, albeit probably more in line with the darker Grimm tales…so I guess at some point that’s why the term ‘twisted fairy-tale’ came to my mind. It’s about dark and twisted subject matter, but underneath it all there’s this layer of hopefulness to it. Subtle, yes…but it’s there…

Nadia Alexander and Toby Nichols are amazing as the ‘Babes in the Wood’, how did you come to cast them?

I worked with the wonderful casting director Lois Drabkin. I saw over 100 girls in total for Mina – all very talented performers, but for this particular role, I felt I needed someone very specific: I needed to cast the monster, and that wasn’t something that was easy to find. In fact, the only actor I saw who was able to disappear into the monster convincingly was Nadia. I knew it the minute she sauntered (yes, sauntered) into the room. She’s such a talented and emotional performer, but also incredibly versatile. She approaches her work and the characters she is interested in playing with a fearlessness I think we’re more used to seeing from actors who are much later on in their careers, which for me makes her all the more impressive.

Once I’d cast Nadia, I asked her to read with the actors we had in mind for Alex and help me with the decision based on her chemistry with them – and luckily we both loved Toby for the role. Similar to Nadia, I knew very early on Toby would be great as Alex; what I didn’t realize was just how great. Toby was only 14-years-old when we cast him, and he initially came off as quiet and reserved, but once I started to work with him I realized just how intelligent beyond his years he was. His instincts are uncanny, and his dedication is remarkable. He brought equal parts fragility and fierceness to Alex that I could have only expected in my wildest dreams.

The emotional release at the climax is quite something, a hard element to pull off?

To be perfectly honest, there weren’t very many easy elements to pull off in this film…I’m not totally sure I quite knew what I was getting myself into production-wise when I wrote the script. But by the time we were in pre-production, I had grown to care so much for these two kids, and so badly wanted to protect them, that I just used that as my guiding light through the entire journey. As long as I felt like I was doing right by Mina and Alex, and being true to them and their stories, I felt comfortable that I was making the right choices for the right reasons, and the rest would fall into place.