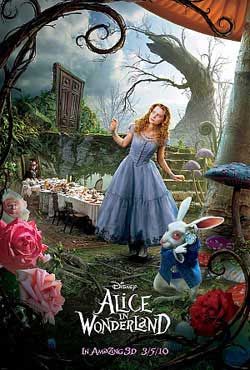 19-year-old Alice returns to the magical world from her childhood adventure, where she reunites with her old friends and learns of her true destiny: to end the Red Queen’s reign of terror.

From the looks of the crowds gathering during premiere weekend, this one is sure to be a money maker…not to mention the fact that the extra fees for 3D put this as a pricey attendance for a family of 4. Tim Burton is back again to offer us another round of his stylish lunacy. The tale of Alice in Wonderland is nothing new, but the tone of the tale is rightly suited for a visionary like Burton. I’ve heard enough reviews of his other films that while his releases are heavily marketable, there are still many who don’t care for his style. I for one though appreciate his cinematic offerings.

A couple of regulars are on board of course who work with Burton quite often. These being the enigmatically chameleon-like performer Johnny Depp and Burton’s own wife Helena Bonham Carter. Throw in the talents of dynamic performers Anne Hathaway, and Crispin Glover, and the lineup makes alot of sense. Alice in Wonderland as a derivatively reproduced tale has been mixed up a bit to give the audience a sense of something new while still keeping pretty in line with the original tale.

Forone, Alice is now 19 years old and promised to a local “Lord” who she on the most part finds repulsing. The other fact is that this Alice who is presumed to be the original Alice is revisiting the wonderland for a second time. The first being the original story. Though even with this round being a revisit, the events play out pretty linear with the original. All the characters are here to greet her and pop up left and right in their own odd ways.

Mia Wasikowska plays Alice, coming from a Victorian society and way of life. She is now a young lady who doesn’t feel the need to have choices made for her. This factor mirrors metaphors in alot of the journey she takes in wonderland. Johnny Depp is the weird eyed, orange haired Mad Hatter, and Helena Bona Carter plays the nasty Red Queen who’s head is 3 times the size of a normal persons head. Traits such as a hatred towards animals and her no tolerance head chopping dictatorship begins to also grow weary on the staff and residents of the kingdom. Anne Hathaway plays the white queen who at times you’d think was straight out of wizard of OZ. Crispin Glover stands a towering 7 feet tall as the Knave of Hearts who we learn pretty quickly is a backstabbing villain serving the queen as long as he can stand her.

I believe folks will really enjoy the special FX which stagger all about the place in composition, enhanced proportions of characters and a world that seems straight out of Tim Burtons head. In fact in first reveal we get a ode to Edward scissorhands with several carved up animal shaped bushes. The other signature is of course the jagged, twisting Burton style trees which almost have you chanting the familiar “Halloween, Halloween” theme subconsciously. As a story, its pretty well told and still appropriate for young viewers. There were times when I felt it lag a bit in slow downs but as a whole it is a pretty dynamic fantasy tale.

The 3D is really well done and in several ways adds a surreal depth to the Wonderland world. Johnny Depp was a great performer though at times I could hear and see him sink back into his Jack Sparrow and Willy Wonka characters. If he were given a second chance I would have liked to see him maybe up his character persona a bit. A highlight was the Cheshire Cat who’s CGI effects were dead on and perfectly done. I’m sure the feedback on this one will stay pretty on track with positives, however I wouldn’t say this fits into the best of the year category.

My own mixed feelings point to a money maker franchise that dipped into fantastical at times with other times being lethargic. I think this is due to the surprises becoming overdone to the point where we are ready to move on to the next thing. Burton called this version a re-imagining which I’ll be quick to point out is true. A strong marketing campaign, clever costumes, FX and star appeal are the winning traits to this rendition. While the film was light hearted, I would have loved to see a certain darkness really extended upon maybe even in the Mad hatters characters more. In all its a good time, pretty showcase and enjoyable. It’s 100% Tim Burton whether you love it or leave it.