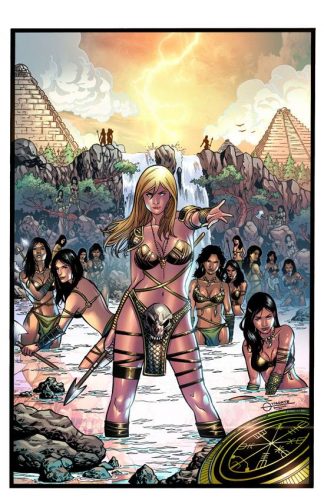 RAVAGE – KILL ALL MEN! is a new comic from Cautionary Comics for Mature Readers. It’s about two army veterans who crash in a mystical jungle populated by a lost tribe of Warrior Women that Hunt, Mate, and Kill All Men!

The RAVAGE – KILL ALL MEN! saga take’s place in the mystical land of The PROTECTORI, home to an Ancient Race of Warriors that are sworn to stop the Evil of The LIZZARSIN, The FIRST ONES, members an ancient Cult from a long forgotten race that worship nothing but their lust and the One-Eyed Demon. The Evil GENERAL RAK of the LIZZARSIN has spent an eternity hunting ANDRAMAK, The Queen Of The Protectori and her Warriors.

The “General” and his Cult of Devil Worshiping Assasians, attack all those that look, think or feel differently, Children, The Sick, The Elderly Protectori Women in the Old Temples, nothing is held sacred to the snakelike “warrior” cult. The tears on the Old feed their dark souls while the cooked bodies of children feed their bellies. All those that are not a part of their hive are an abomination to be ridiculed, attacked and enslaved. Women are simply meant to be used in their Dark Society.

About Cautionary Comics
Cautionary Comics was created out of Benjamin L. Henderson thinking about creating comic books out of his original books and screenplays. This thought was also mixed with his passion for leaving his stories behind and those got his wheels turning. Cautionary Comics was finally brought to life after a lot of hard work and a small round of Angel Investment from friends at a Silicon Valley investment group.