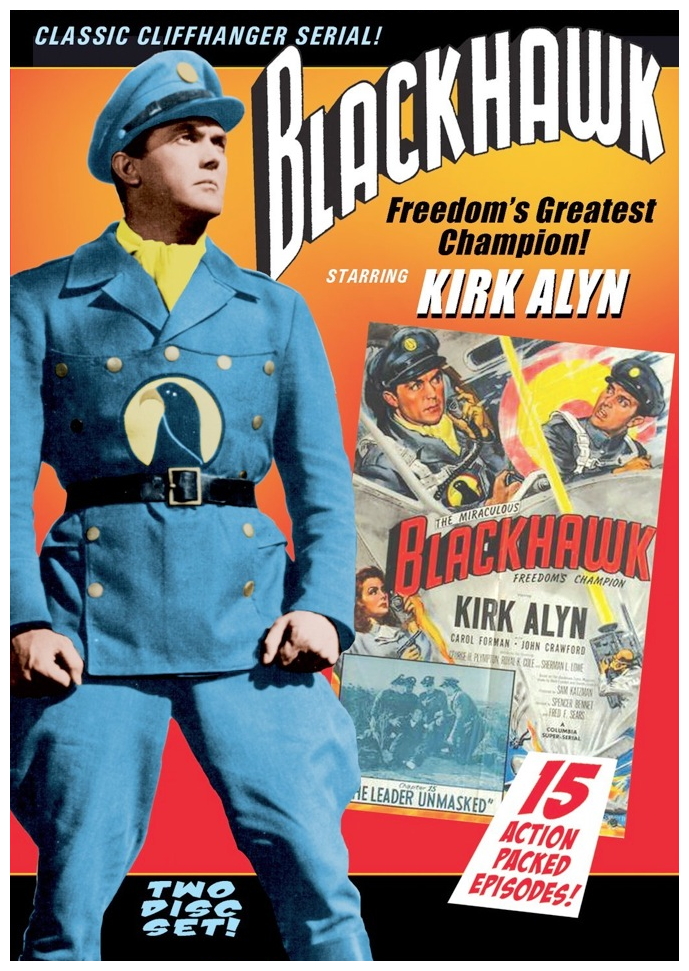 “The Blackhawks were seven flyers who banded together during World War Two to fight the Nazis. After the war, they continued to fight evil where ever they find it. In this movie, they are battling a group of spies and saboteurs bent on destroying democracy. The Blackhawks foil a succession of plots, with a cliffhanger ending in each episode.” (courtesy IMDB)

Steven Spielberg is finally making a superhero movie, joining Warner Brothers to produce the action-adventure Blackhawk, with Spielberg directing. Based on a classic comic-book property, the project will mark the filmmaker’s first feature to focus on characters from the DC universe. Spielberg recently directed Ready Player One (2018) for Warners which, at this writing, has taken US$500 million at the box-office. Warners chairman Toby Emmerich: “We are so proud to be the studio behind Steven Spielberg’s latest hit, and are thrilled to be working with him again on this new action adventure. We can’t wait to see what new ground he will break in introducing Blackhawk to movie audiences worldwide.” The screenplay is being written by David Koepp, who collaborated with Spielberg on Jurassic Park (1993), The Lost World (1997), War Of The Worlds (2005) and Indiana Jones And The Kingdom Of The Crystal Skull (2008). 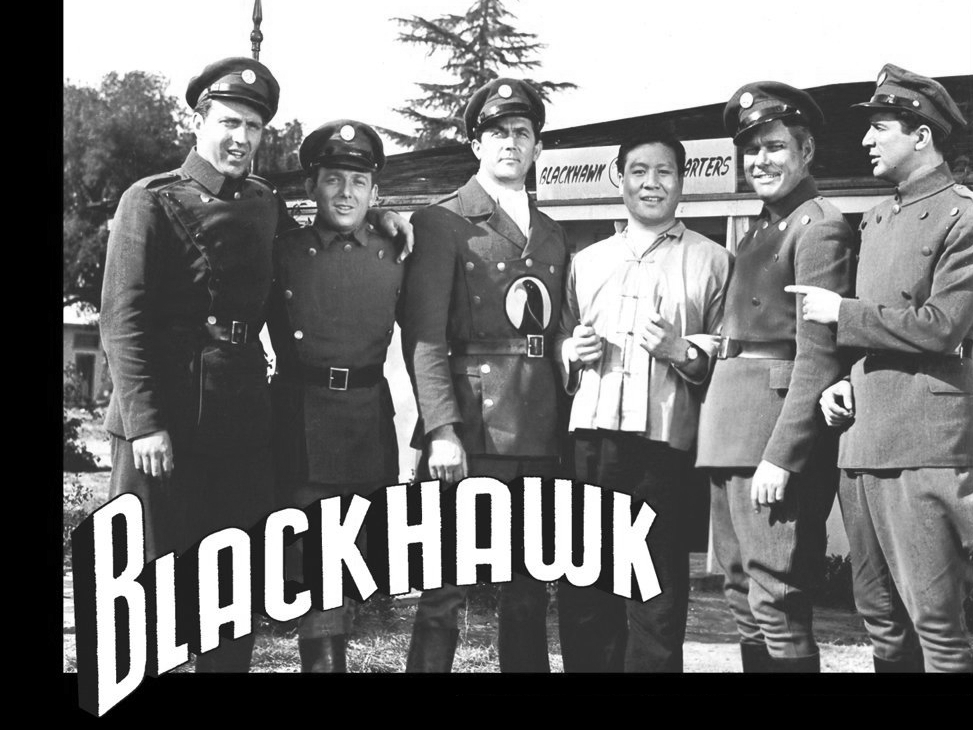 Blackhawk was the brainchild of Will Eisner, the creator of The Spirit. Along with Chuck Cuidera and Bob Powell, he introduced the Blackhawks – Andre, Olaf, Chuck, Hendrikson, Stanislaus, Chop-Chop, and their leader Blackhawk himself – as an elite band of fighter pilots during World War Two who lived on a private island and battled the Nazis and other forces that threatened democracy and peace of the free world. The team first debuted in Quality Comics #1 and then, after Quality Comics became a part of the DC Comics universe, they appeared in a comic series simply titled Blackhawk. With Blackhawk issue #230, the pilots became superheroes with individual code-names like Leaper, Golden Centurion, Doctor Hands, etc. But it was really during the war years and shortly thereafter that the Blackhawks made their mark. According to the original storyline, Janos Prohaska, also known as Blackhawk, was a polish pilot who flew a PZL P.50a Jastrzab against the German invasion of Poland in 1939. 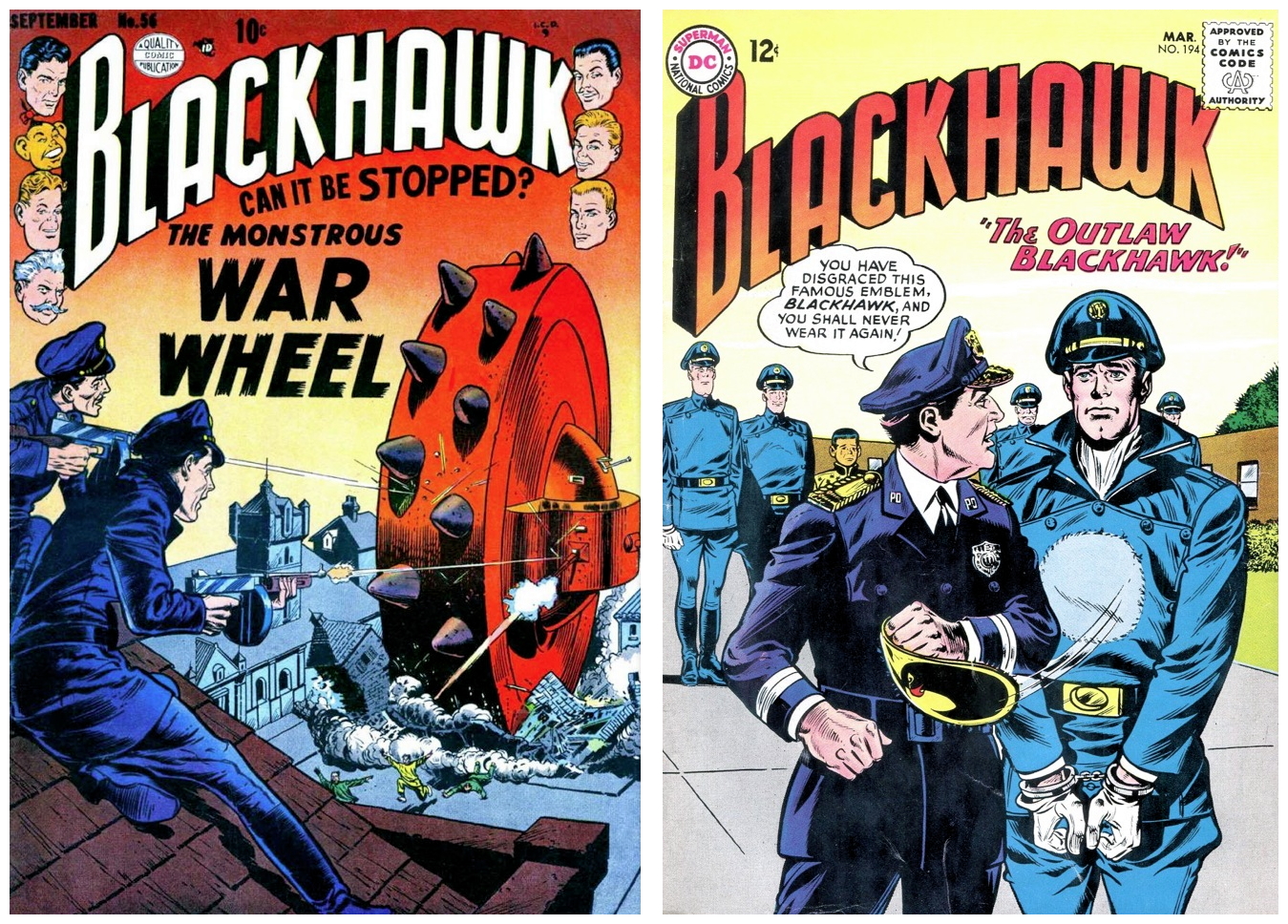 Shortly after his country was overrun by the Nazis, Janos formed a small team of ace pilots from various nationalities. Andre was French, Olaf was Swedish, Chuck was a Texan-born American, Hendrickson was Dutch, Stanislaus was Polish, and Chop-Chop was a stereotypical Chinese. They flew Grumman XF5F-1 Skyrockets, launched from a secret base known as Blackhawk Island. Zinda Blake, a Russian aviatrix, became the team’s first and only lady Blackhawk (when Zinda Blake was displaced in time due to ‘Zero Hour’ and became a member of the Birds Of Prey, Natalie Reed took her place). Unfortunately, the silliness of making the Blackhawks into superheroes eventually led to the comic’s cancellation in 1968. Several other short runs and limited series have kept the Blackhawks alive, but far from a best-selling series. They made their first media appearance in a radio serial that was broadcast in 1950, from September to December, in which Blackhawk was voiced by Michael Fitzmaurice. 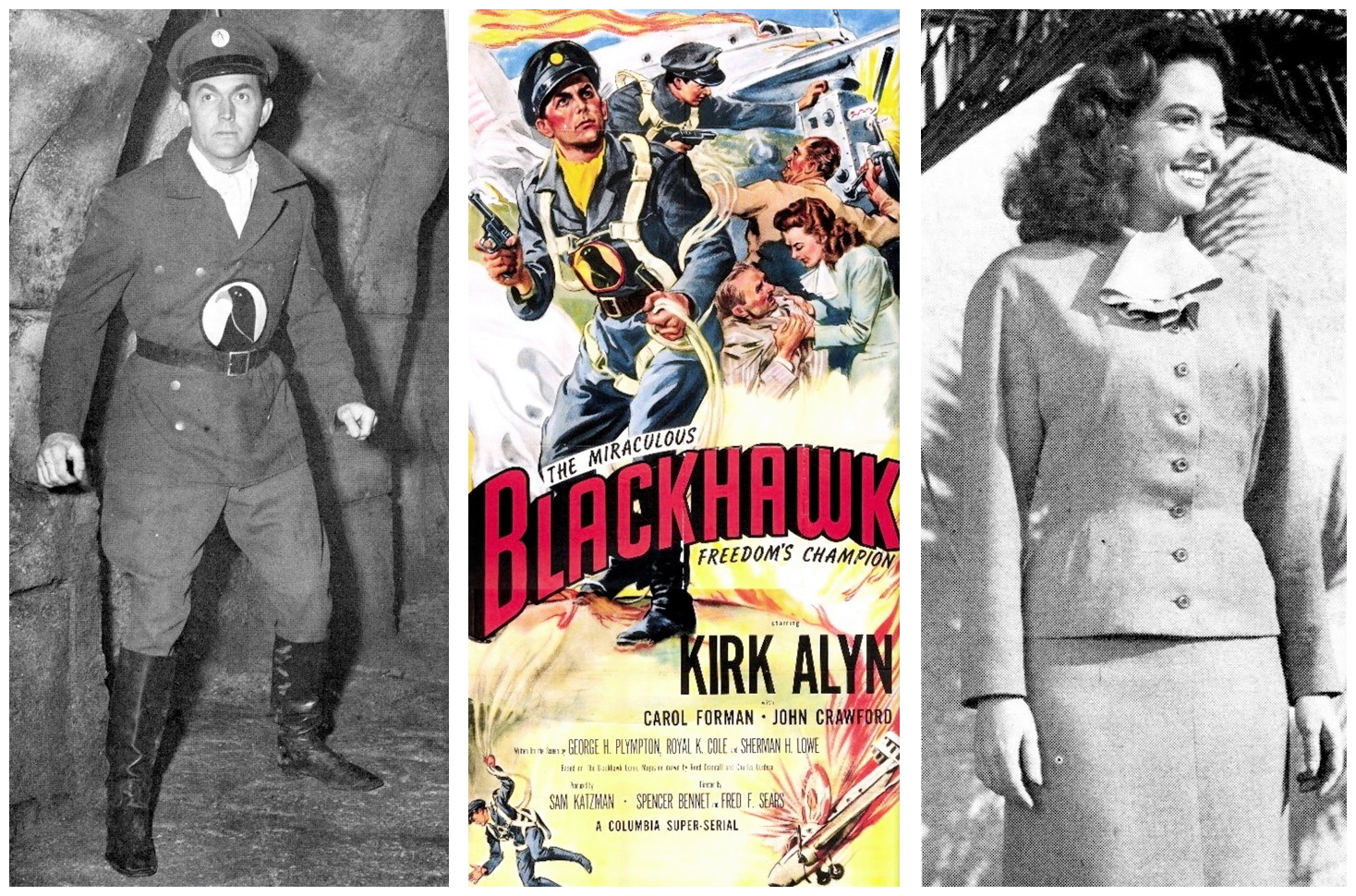 As the end of the era of Saturday morning movie serials approached (due to the popularity of television), Sam Katzman and Columbia Pictures produced what many consider to be the last great action serial. Blackhawk (1952), subtitled Fearless Champion Of Freedom, was directed by Spencer Gordon Bennet and Fred F. Sears. Writer George Plympton, who attended a pre-production staff meeting where they all listened to a recording of the short-lived Blackhawk radio series, declared that everyone at the meeting was aghast at the confusing babble of accents, and it was decided to give the Blackhawks standard American accents. Based on the comic series, the movie serial picks up shortly after the war, and follows the exploits of the Blackhawks as they battled spies and saboteurs in each cliffhanging episode. Kirk Alyn, who had played Superman in two previous serials, was cast as Blackhawk, and the lovely Carol Forman, known for her portrayals of ‘bad girls’ in serials, was hired to play the femme fatale of an unnamed foreign power bent on stealing a cylinder contain a top-secret super-fuel known as Element X. The cylinder changes hands several times in the fast-paced action-adventure but, ultimately, the Blackhawks emerge victorious. 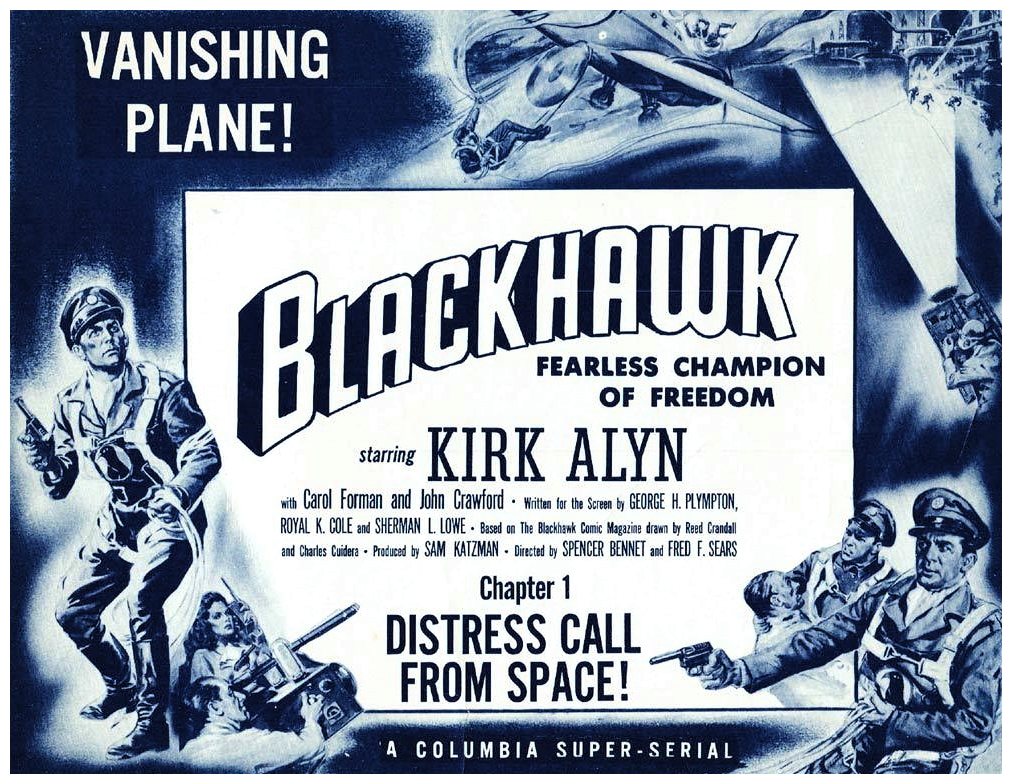 Chapter 1. Distress Call From Space.
Chapter 2. Blackhawk Traps A Traitor.
Chapter 3. In The Enemy’s Hideout (in which Kirk Alyn performs a dangerous stunt. In order to save the life of squadron member Stanislaus, who is tied to a stake in the path of a taxiing plane, Blackhawk runs up to the vehicle and turns it aside by grabbing the wing while a hidden pilot inside the plane steered it. When writing the scene, the screenwriters assumed a lightweight wood-and-canvas plane would be used, not the heavy metal aircraft used in the final scene, which could have easily killed Alyn if anything had gone wrong).
Chapter 4. The Iron Monster.
Chapter 5. Human Targets.
Chapter 6. Blackhawk’s Leap For Life.
Chapter 7. Mystery Fuel.
Chapter 8. Blasted From The Sky.
Chapter 9. Blackhawk Tempts Fate.
Chapter 10. Chase For Element X.
Chapter 11. Forced Down.
Chapter 12. Drums Of Doom.
Chapter 13. Blackhawk’s Daring Plan.
Chapter 14. Blackhawk’s Wild Ride.
Chapter 15. The Leader Unmasked. 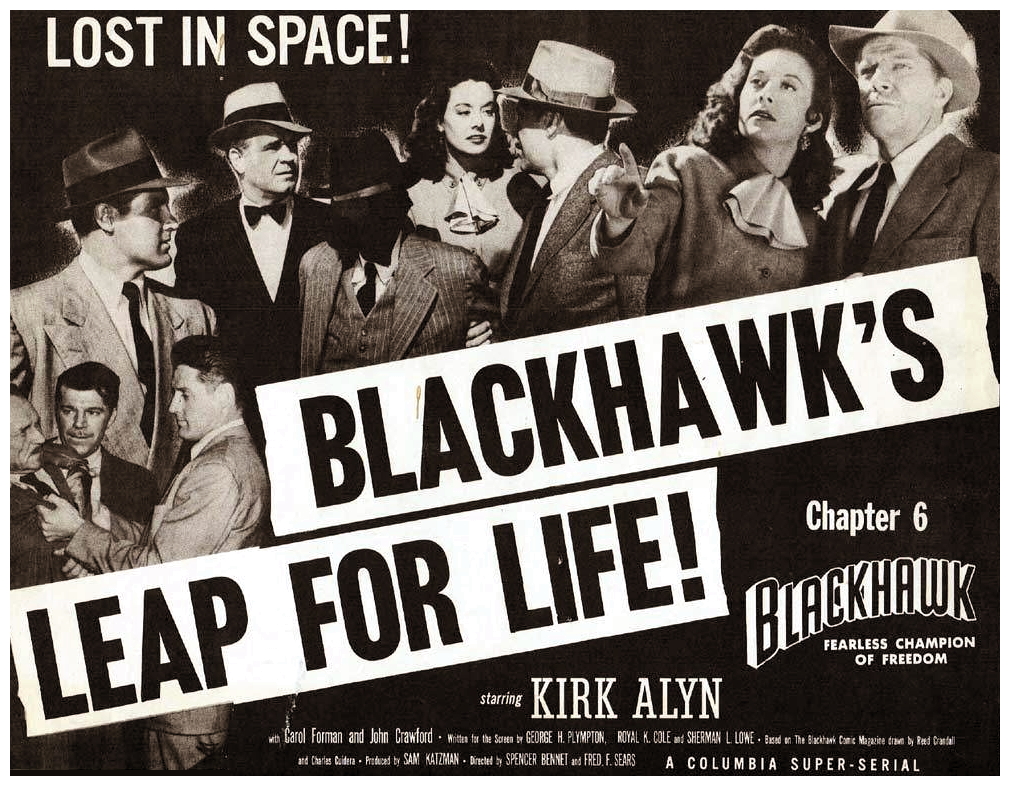 Due to budget restraints, the fifteen-chapter serial had only one plane at its disposal, and that plane is shared by the Blackhawks. The various interiors all look similar because the production team had to keep reusing sets that had already been built for previous chapters. Despite these problems, Columbia Pictures‘ final foray in the movie serial business is also one of its best. After the 1952 movie serial, the Blackhawks have made relatively few media appearances. A Blackhawk novel was published by in 1982 by William Rotsler in anticipation of a Blackhawk movie that never got off the ground. In 2001 the Blackhawks appeared in a couple of episodes of the Justice League animated television series, and a laudatory reference to the Blackhawk team is also made in Sky Captain And The World Of Tomorrow (2003). It’s with this thought in mind I’ll politely ask you to please join me again next week to discover if Hollywood has yielded up a work of substance, or a nonsensical bit of fluff for…Horror News! Toodles! 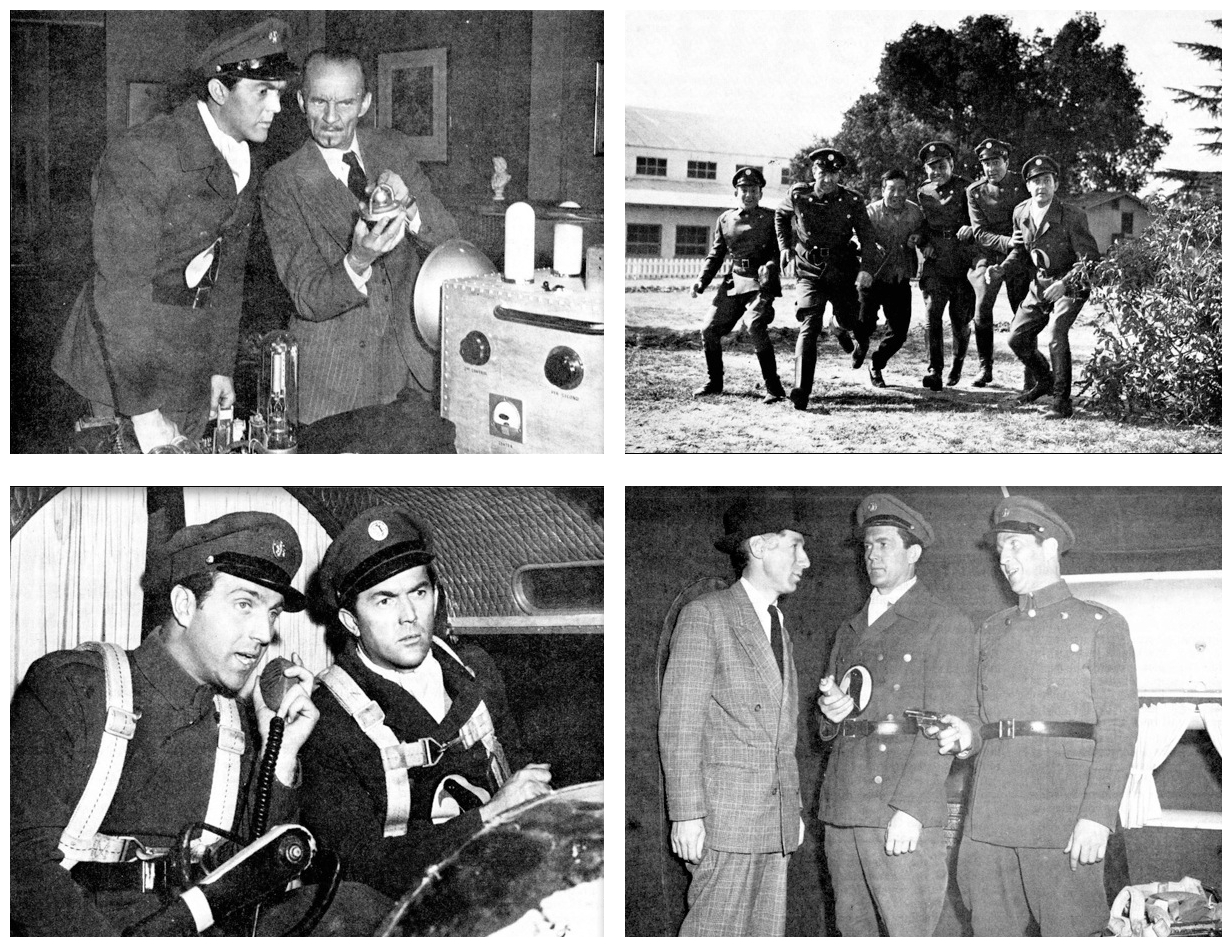