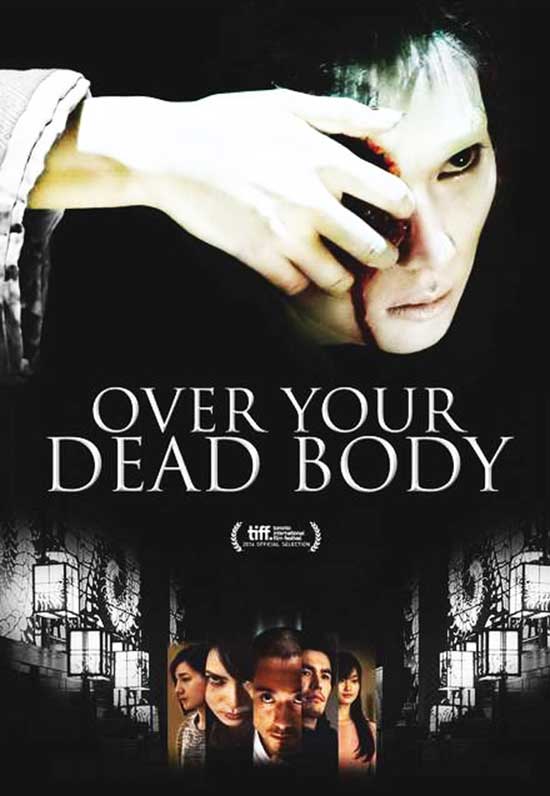 A star, Miyuki Goto (Ko Shibasaki) plays Oiwa, the protagonist in a new play based on the ghost story Yotsuya Kaidan. She pulls some strings to get her lover, Kosuke Hasegawa (Ebizo Ichikawa) cast in the play, even though he’s a relatively unknown actor. Other performers Rio Asahina (Miho Nakanishi) and Jun Suzuki (Hideaki Ito) lust after Miyuki. Off stage the cast’s possessive love and obsessions exist as reality. Trapped between the play and reality, the cast’s feelings for each other are amplified. When it becomes clear that love is not meant to be both on and off stage, love turns into a grudge and crosses the blurred line between reality and fantasy.

Miyuki Goto (Ko Shibasaki) plays the leading role of the wronged woman Oiwa in the theatrical production of the classic ghost story Yotsuya Kaidan. However lines between reality and fantasy are blurred when tensions rise between her and her partner in life and stage, Kousuke Hasegava (Ebizo Ichikawa) and life comes to imitate art in this bloody tale of betrayal and vengeance.

Ghost story of Yotsuya is one of Japans best known and well-loved ghost stories. Originally written for the kabuki stage by Tsuruya Nanboku in 1825 and tells a tale of Oiwa, a woman betrayed and murdered by her own husband, the deceitful ronin Iemon. After murdering Oiwas father in order to marry her, the ambitious and greedy Iemon is not happy with his current status and hoping to marry into a wealthy local family, he agrees to a plan to poison, disfigure and murder his wife. Unlucky for Iemon, such horrific acts turn his poor wife into a vengeful ghost bent on seeking retribution as long as there is life left in his wretched body. 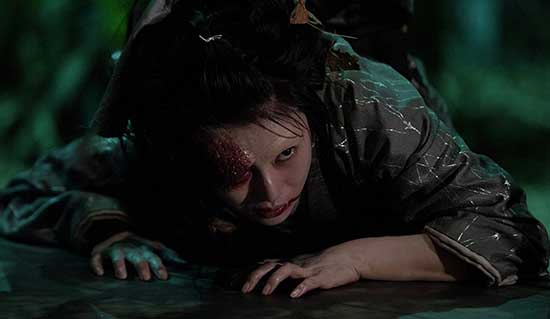 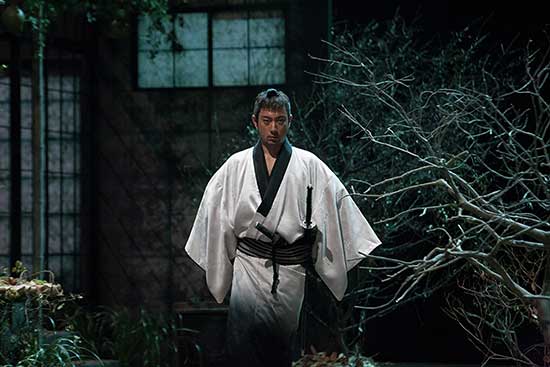 Ghost story of Yotsuya (or Tokaido Yotsuya kaidan as it was originally known) has been adapted to the screen over thirty times and as such has gone through many incarnations over the years. The story has been changed from classic ghost story to a more psychological tale of betrayal and guilt and back again.

I personally am a long-time fan of the story (especially the 1959 film by Nobuo Nakagawa) and as such was over the moon to hear that new version of this classic tale was coming out, and finding out that the director’s chair was occupied by non-other than the legendary Takashi Miike, I was even more excited. The original play thrilled audiences with gory violence and fantastical special effects and on that basis Miike seemed like the perfect fit to direct such a tale. However, many Miike fans were sorely disappointed with his rather subdued approach on the subject. While the film does offer a few gory scenes,  it’s for the most part a moody, psychological piece keeping the audience in suspense until it’s closing scene as to what is and is not real.

The story is built with alternating scenes between the play and reality. From the very first scenes the viewer comes to know that Miyuki’s and Kousuke’s relationship offstage is not on an even keel. Resentment seems to be building between the couple and this starts to bleed in to their working relationship.  This is reflected on their onstage relationship as the married couple of Oiwa and Iemon appears to be becoming more and more everyday reality. This is especially true with Kousuke who starts an affair with Rio Asahina, the woman playing the part of Iemons second wife, Ume Ito.  Kousuke’s ambitious personality and indifferent attitude towards Miyuki also seems to mimic the disposition of the deceitful Iemon. The similarities between the play and reality become even more clear In a scene between Kousuke and Rio, where Rio is trying to convince Kousuke to leave his life in Japan behind and escape to America with her. 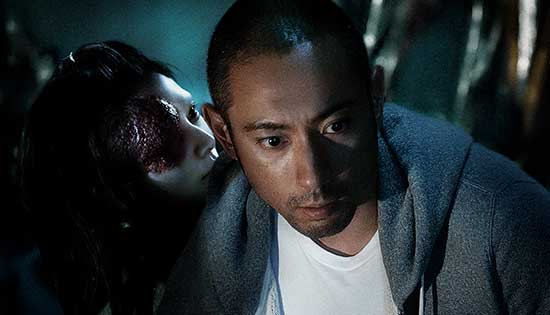 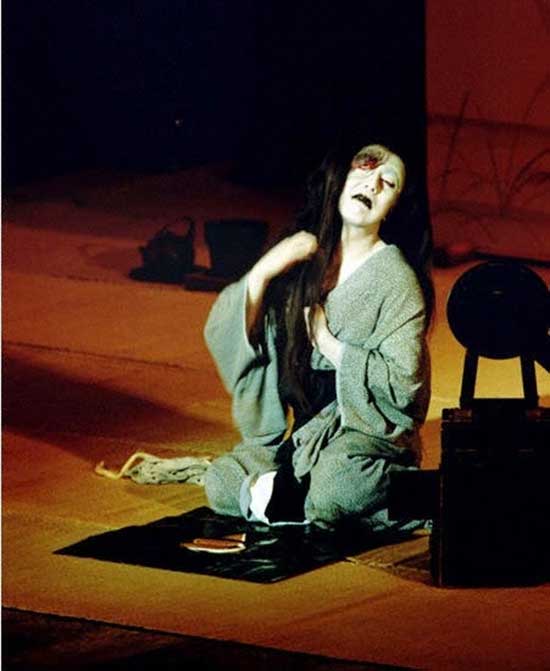 Much like Ume in the play, whose family entices Iemon to their murderous plot by promises of wealth and status, Rio tells him Kousuke he can come and work for her father’s company and leave the non-profitable acting career behind. However, even though he has no trouble deceiving his current girlfriend, unlike Iemon, the ambitious Kousuke is not so quick to abandon the life and career he has built for the promise of easy and steady income.  Miyukis transformation into the vengeful Oiwa is not quite as apparent and straightforward. While the themes of abandonment and betrayal are present, the driving force for Miyuki’s rage is jealousy and disappointment. Jealousy over increasingly indifferent Kousuke and ever-increasing disappointment of her own capability to have a child. These two together drive Miyuki to some horrendous acts, and the much-waited violence does pay off by the end of the film.  However, as Oiwa is one of the most influential ghostly figures in Japanese cinema and has been the inspiration for such infamous ghosts as Sadako from the Ring films as well as ever so horrifying Kayako from The Grudge, I would have liked to see more of her.

The ghost Miyuki/Oiwa, only gets very minimum screen time and this seems like a real shame as Miike’s Oiwa is wonderfully creepy. The makeup has been kept very loyal to the original ghost, with her disfigured face and long black hair.  Her quick and sudden attacks on the petrified Kousuke also hid within them a lovely little reference to the original story;  Miike’s Oiwa is not merely a terrifying spectre coming to torment her male counterpart. She physically attacks him in a very peculiar manner, fast and hard, out of nowhere, very much like a snake. This I believe is a reference to the fact that the character of Oiwa was born in the year of snake, and while this fact is not mentioned in this particular incarnation of the story, snakes have been heavily associated with her in other versions of the Yotsuya Kaidan.  Miike has however taken some liberties with Oiwa’s character. Miyuki is not the fragile little flower that Oiwa is often portrayed as, she does not need the release of death to transform her into the vengeful force of nature. In fact, as the film goes on, it becomes more and more apparent that underneath her gentle demeanour lies something altogether more sinister. 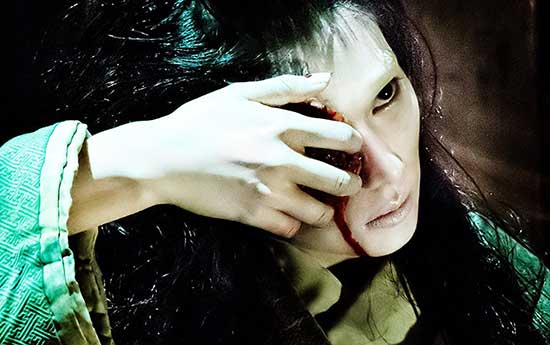 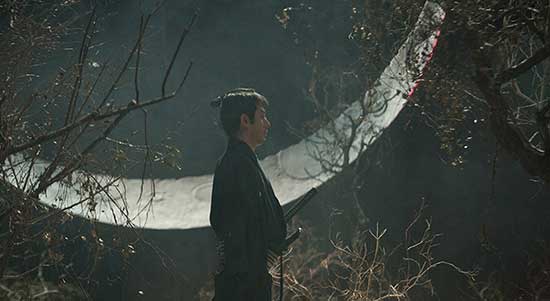 The cinematography is beautiful throughout the film, in particular the scenes of the play with its traditional revolving stage are especially gorgeous. Miike seems to have given a nod to the 1959 version and all its technicolour splendour. The scenes in the theatrical setting are wonderfully lit with bright, vibrant colours that seem very carefully thought out. The use of light also works as a device separating the theatrical drama from the real world. The dark and moody scenes in the theatre are contrasted with blazingly bright scenes in the outside world and as the characters slip deeper and deeper into their own personal hells, the darkness of the stage also seems to start to seep in to the real world.

On the whole I very much enjoyed “Over your dead body”. It’s beautiful, eerie and while Miike could have potentially gotten away with even more violence, to my mind the level of gore pretty much perfect. The gory scenes are well spaced out, keeping the viewer in anticipation throughout, but I found the final horrific climax more than satisfying. Miike has succeeded in modernising this classic tale in a very elegant manner. It is stylized enough to be respectful, but modern enough in its use of horror to bring the story into this century. So, if you’re looking for a Miike gore fest, maybe skip this one, but if instead you’re in a mood for a psychological horror with ghostly undertones, you should definitely give “Over your dead body” a go.