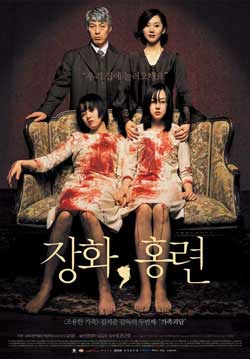 Following the death of their mother, sisters Su-mi and Su-yeon are sent to a mental hospital. When they are released, they are greeted by their father and taken home. Once there, it becomes obvious that this isn’t the wholesome family unit that the girls’ new stepmother wishes it was. Disturbing and seemingly unexplainable events happen and it soon becomes impossible to tell whether it is the sisters’ unstable mental health, the cruel mind games played by the step mother, or the dark presence of a supernatural force which is at work within the house.

A Tale of Two Sisters (Janghwa, Hongryeon literally ‘Rose and Lotus’) is both the highest grossing Korean horror film and the first to be screened in American theatres. An American remake called “The Uninvited” is slated for a 2009 release.A haunting retelling of a Korean folk tale, Janghwa Hongreyon-jon, is much more than a charming Western fairy tale and stays true to the classic form of Asian horror, relying on psychological and supernatural suspense rather than gorefests.

Did I say fairy tale? Think more like along the lines of The Shining meets Cinderella. Mental instability and wickedness fare well in this movie, two sisters, relentlessly tormented, a creepy old home located deep in the woods of the countryside, complete with ghosts, possessions, young girls getting locked in closets, and a wicked stepmother that could give the Witch in Hansel and Gretel a run for her money. Forget the ghosts; the house alone looks creepy, complete with squeaky floorboards, and walls that could ooze blood.

The movie opens in a mental hospital where of Su-Mi (Im Su-jeong) is being questioned by a doctor who is showing her pictures of her family and asks if she can speak about the day that led her to being admitted to the hospital. From this point forward, most of the movie is told in flashbacks.

The story begins as the two sisters, Su-mi (Im Su-jeong) and Su-yeon (Mun Geun-yeong) return home after a mysterious absence to live with their clueless father (Kim Gab-su) and Eun-joo (Yeom Jeong-a), their wacko stepmother, referred to throughout the movie as “That Woman.”

Throughout the movie, much of the anxiety lies between the strong-willed Su-mi and her stepmother, who abuses the obviously weaker Su-yeon. At the same time, Su-mi is tortured by nightmares, and experiences unexplainable moments even when she’s awake. Looking through old family photos, Su-mi is dismayed to find the image of Eun-joo in the same photo as her dead mother, and there are more than a few ghouls with long black hair and pale skin, moving in and out of the shadows. As in ”Ju-on,” something terrible has happened in this home, and angry spirits, note I say spirits here, cannot rest until they have their revenge. In one of the most frightening scenes, a guest visiting the home for a remarkably unusual dinner party goes into convulsions, and sees something horrifying lurking beneath a sink. Hold on a minute, I need to get my teddy bear for that one!

Two Sisters takes its time and allows you to figure things out alongside the characters, just make sure to look for clues as you’re watching. It’s compelling, and it gets underneath your skin with its psychological curveballs, sensational sound effects, razor-sharp editing, and blood-curdling screams; a rare mix of fantasy, supernatural, and reality. From the opening image of Su-mi being in an insane asylum, through the unsettling conclusion, keep in mind that Kim has intentionally directed this movie with everything designed to freak you out.

Yes, you will be left to draw conclusions, and you may want to watch the film again to find missed clues and to put pieces together, but if anything this film will undoubtedly remind you that there are few things as terrifying as our own imaginations. Now where’s my teddy bear? 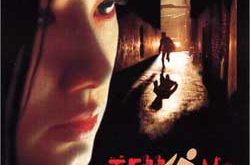