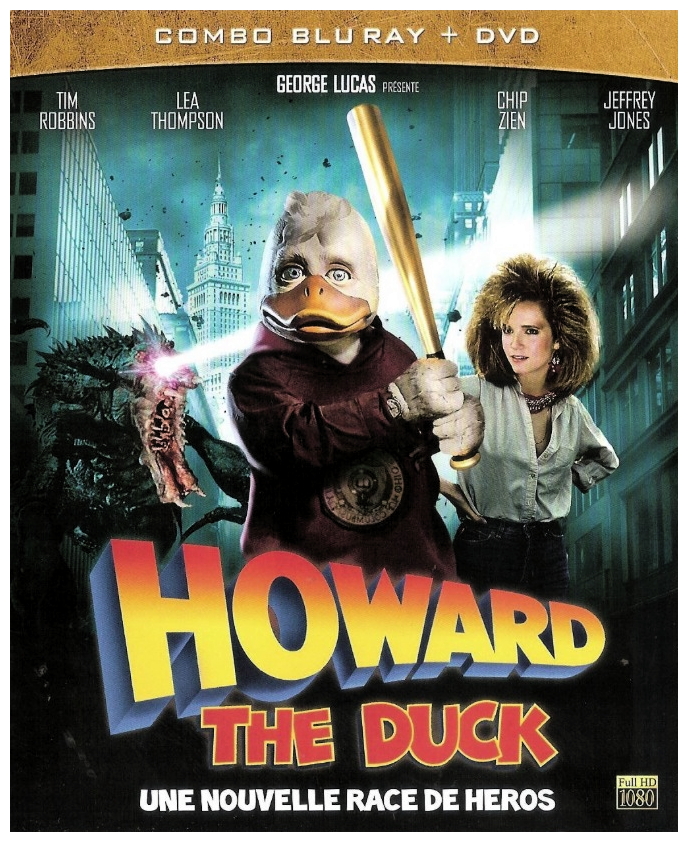 “Howard, a duck the size of a short human, is accidentally brought to Earth through a laser beam in an experiment being performed by a Cleveland physicist Doctor Walter Jenning, and his assistant Phil Blumburtt. Howard ends up in Cleveland, where he rescues singer Beverly Switzer from a group of thugs. Beverly and Phil are friends, and when the government is told about Howard, she helps Phil and Jenning hide Howard from the authorities until they can get him back home – but then an evil being arrives through the laser beam and takes possession of Jenning’s body putting Howard, Beverly and Phil in a fight for their lives.” (courtesy IMDB)

Howard is a duck who accidentally slipped through a dimensional warp in the 19th issue of Marvel‘s Adventure Into Fear comic (December 1973) and ended up in a world where superheroes ruled, instead of the funny animals that populated his own world. Howard was the creation of Steve Gerber and, while initially the idea of a cartoon duck in the fictional world of Spider-Man and the Fantastic Four must have seemed like a good idea at the time, the idea began to wear thin very quickly. At first he appeared opposite the Man-Thing then, in January 1976, Marvel gave him his own comic book. Walt Disney studios threatened to sue Marvel due to Howard’s similarity to Donald Duck, and then Gerber sued Marvel, claiming his ownership made Howard a property he could take to rival Eclipse Comics. Marvel won both suits and continued to publish Howard The Duck comics. Howard’s somewhat irreverent approach to situations made him popular amongst intellectuals who would not normally read comics, but his character sat well with mainstream comic fans. 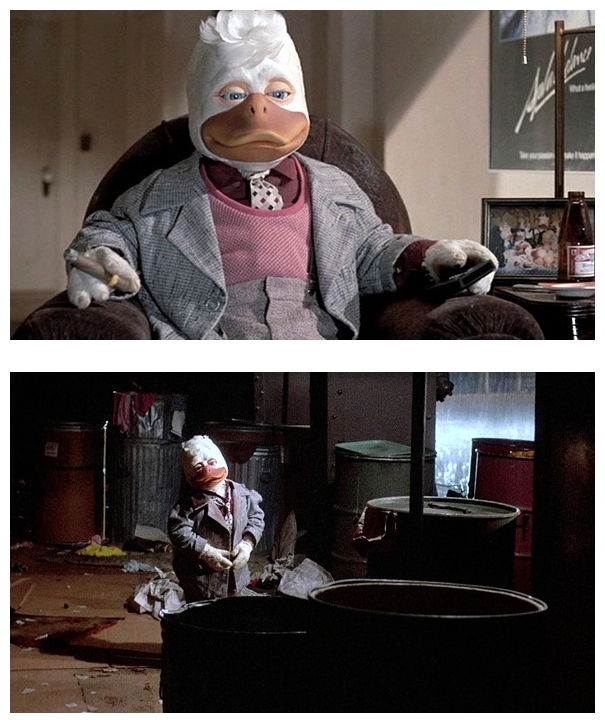 His tagline ‘Trapped In A World He Never Made’ appealed to those existentialist readers who knew exactly what Gerber was trying to do with his most unorthodox figure. After his comic series eventually came to an end, Howard continued to appear in team-ups with The Defenders and other Marvel characters. He might have disappeared altogether had it not been for the first-class turkey of a film that George Lucas produced soon after the Star Wars trilogy and, alas, he has remained in the public’s eye ever since. Howard made his first media appearance in the guise of Ed Gale (and a half-dozen other puppeteers) with the voice of Chip Zien (beating Rob Paulsen, Townsend Coleman, Martin Short and John Cusack to the role) in the big-budget (US$37 million) box-office flop Howard The Duck (1986) and, thankfully, had not resurfaced until his brief cameo near the end of Guardians Of The Galaxy (2014). What on earth possessed George Lucas to team-up with Universal Pictures to produce this expensive raspberry is still a matter of speculation and rumour. The film was widely panned when released and remains one of the worst films ever to be squeezed out of Hollywood. 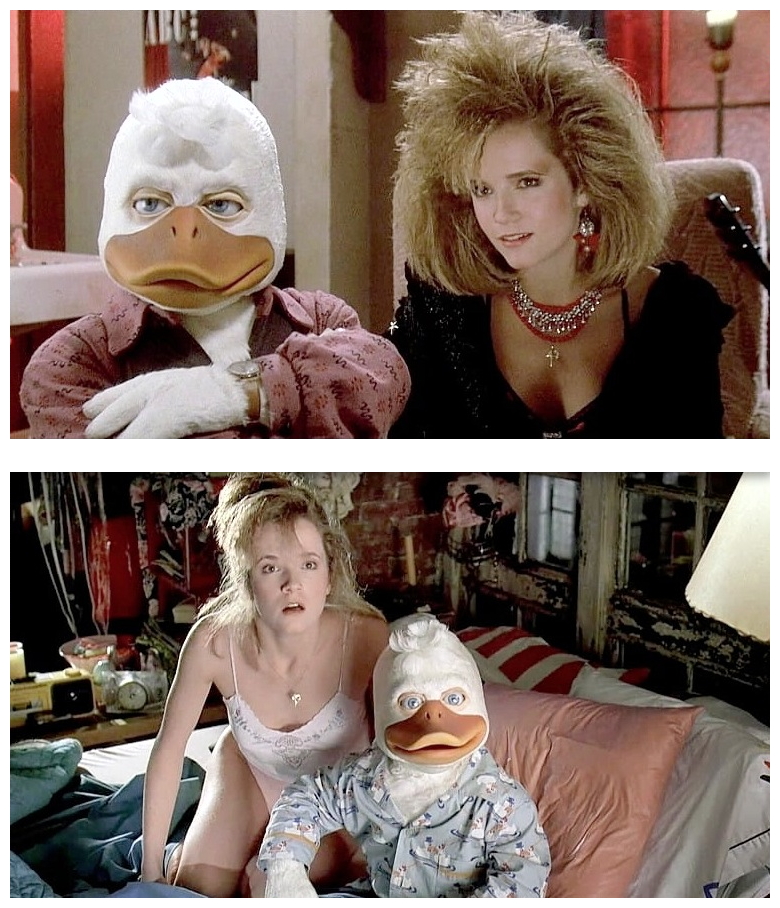 Howard is an average 27-year-old duck who lives on Duckworld, a planet very similar to Earth, except everyone is an anthropomorphic duck and the planet has two moons. While relaxing with the latest issue of Playduck magazine, his armchair begins to shake violently and is propelled out of his apartment and into space, coming down in Cleveland, Ohio on Earth. Soon Howard encounters a young woman being attacked by thugs. He defeats them using Quak-Fu, his own unique style of martial arts, and she introduces herself as Beverly Switzler (Lea Thompson, beating Paula Abdul, Belinda Carlisle, Kim Basinger, Sarah Jessica Parker, Jodi Benson, Lori Singer, Phoebe Cates and Tori Amos to the role) and decides to take Howard home to her apartment. Next day Beverly takes Howard to her friend Phil Blumburtt (Tim Robbins in his first major movie, beating Jay Leno to the role), a scientist who she hopes can help Howard return to his world. After Blumburtt is revealed to be a mere janitor, Howard gives up trying to get home and resigns himself to life on Earth. 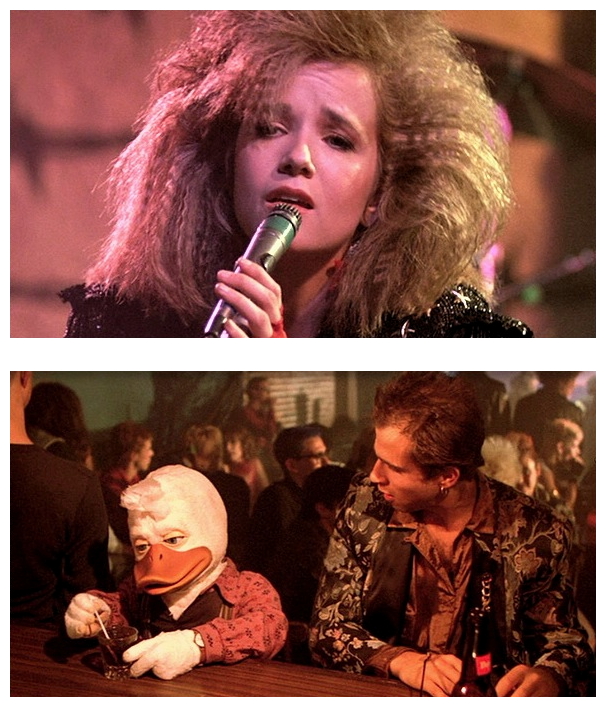 He gets a job as a janitor at a local singles sauna, but that doesn’t last for long, and decides to return to Beverly. He finds her playing in a band called Cherry Bomb at a nightclub (composer Thomas Dolby cameos as the bartender) and starts a fight with the band’s abrasive manager. Resorting to Quak-Fu, Howard is victorious again. Howard walks Beverly back to her apartment, and she tries to talk him into becoming Cherry Bomb’s new manager. Just before they kiss, Blumburtt arrives to explain that an experimental laser spectroscope had accidentally transported Howard to Earth when it was activated, and he thinks he can be sent back to his world through a reversal of this same process. When they get to the laboratory, the laser spectroscope malfunctions and transports something else to Earth, and one of the scientists, Doctor Walter Jenning (Jeffrey Jones) is secretly possessed by an alien life-form. While at a diner, the extraterrestrial intelligence introduces himself as the Dark Overlord of the entire universe and demonstrates his awesome mental powers by breaking up some furniture. 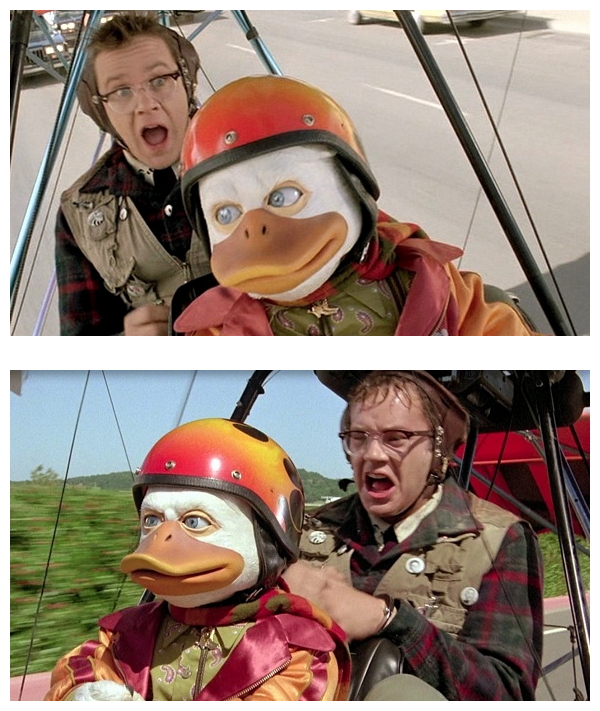 Then a fight breaks out involving a group of truck drivers and Howard is almost killed by the chef, but Jenning destroys the diner and escapes with Beverly. Howard finds Blumburtt has been arrested for impersonating a scientist, and together they escape in an ultralight aircraft (essentially a hang-glider with a motor) to search for Jenning and Beverly. Meanwhile, back at the laboratory, Jenning ties Beverly down and intends to transfer another alien intelligence into her body with the laser spectroscope. Howard and Blumburtt arrive just in time to blow up Jenning with an experimental neutron disintegrator – or so they think. In what is arguably the best scene in the film, the Dark Overlord reveals his true form at this point, a hideous giant stop-motion monster that wouldn’t be out of place in a Lovecraft story. Howard fires the neutron disintegrator again and the alien creature is finally eliminated then, to make sure no more Dark Lords come to Earth, he uses the disintegrator to destroy the laser spectroscope as well. This also ruins Howard’s only chance of returning to Duckworld, of course, so instead he becomes Beverly’s manager, plays guitar in the band, hires Blumburtt as a roadie, and they all lived happily ever after. The end. 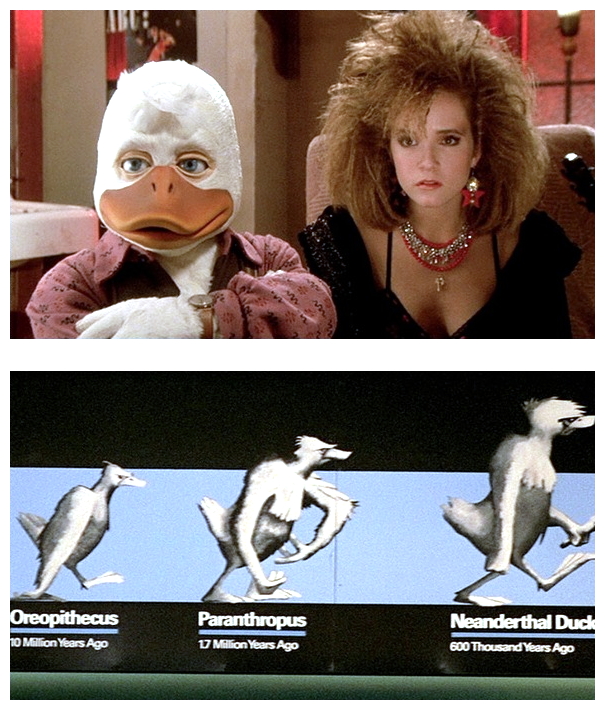 What should have been a spectacular comedy results in something that feels more like a lame Disney Channel made-for-TV movie. The central character is totally unconvincing with an expressionless face and poorly functioning mouth. The beautiful soundtrack by maestro John Barry is almost completely replaced by pop songs by Thomas Dolby (who has done much better work), the humour is practically non-existent, and performances seem forced. Despite the stigma of being attached to such a disaster, the lead actors went on to succeed in their chosen careers. Tim Robbins ended up winning an Oscar for his performance in Mystic River (2003), and Jeffrey Jones has since featured in films like Ferris Bueller’s Day Off (1986), Beetlejuice (1988), Mom & Dad Save The World (1992), Ed Wood (1994) and The Devil’s Advocate (1997). The bad press that Howard The Duck received on its opening weekend forced Lea Thompson to accept a role she previously refused, in Some Kind Of Wonderful (1987): “I had to get on another movie. I wouldn’t have done the movie if Howard wasn’t such a bomb.” 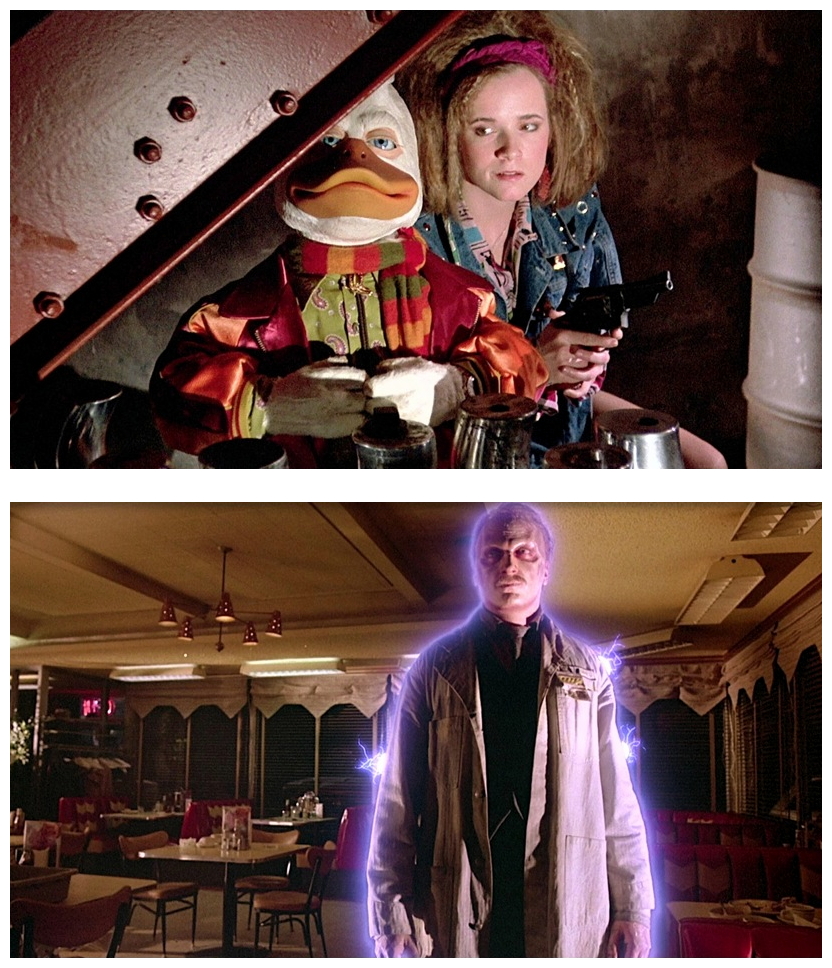 Chip Zien found fame on Broadway starring in Stephen Sondheim musicals, and Ed Gale went on to appear in several dozen films and television shows, most famously as Chucky, the serial-killing doll in the Child’s Play (1988) franchise (Gale insists he receives more fan mail for his stint as Howard than for Chucky). Marketing companies went into damage control mode, changing the title to Howard: A New Breed Of Hero (1986) for Europe and Australia. Following the film’s release, director Willard Huyck and producer Gloria Katz both went into hiding in Hawaii and refused to read reviews of the film, some of which include:

Leonard Maltin: “A hopeless mess. A gargantuan production which produces a gargantuan headache.”

Michael Weldon: “It was obviously made in LA and suffers from long, boring chase scenes.”

Rotten Tomatoes: “While it has its moments, Howard The Duck suffers from an uneven tone and mediocre performances.” 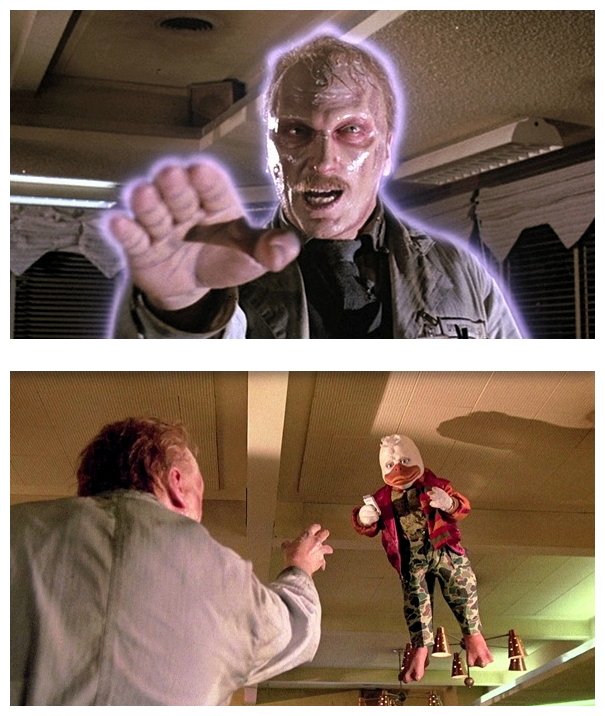 As a matter of fact, this is one case when I’d actually recommend reading the novelisation over watching the movie. The hilarious 232-page novel was written by National Lampoon editor Ellis Weiner based on the script by Huyck and Katz. It’s comparable with anything written by Douglas Adams or Terry Pratchett, and stands as evidence that it would have worked as an animated movie. George Lucas spent more than US$2 million on the duck suit alone and, when the film bombed at the box-office, he blamed the live-action duck. Lucas was heavily in debt after building his US$50 million Skywalker Ranch complex, and was counting on Howard The Duck to get him back in the black. When it bombed, he was forced to start selling off assets to stay afloat. Apple CEO Steve Jobs offered to help by buying Lucasfilm’s newly-launched CGI animation division for a price well above market value and Lucas, in desperate straits and thankful for the assistance, agreed. In what might be the only positive outcome of Howard The Duck, Pixar Animation Studios was created (Pixar as a department has been around since 1979 but was not made an actual corporation until 1986) but that’s another story for another time. I’ll now take my leave of you, trusting to see you again next week after I’ve scraped the bottom of the Public Domain to find another rotten apple to throw at you from…Horror News! Toodles! 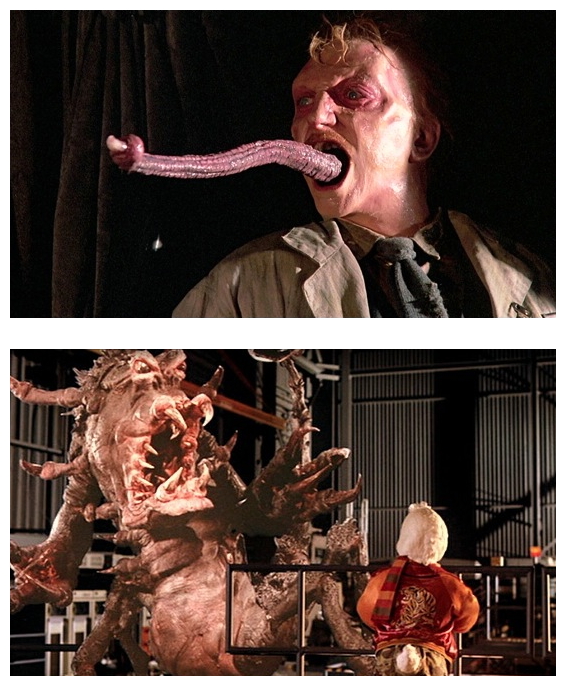