“A reporter who has had an affair with the daughter of the US President is sent to Hungary. There he is bitten by a werewolf, and then gets transferred back to Washington, where he gets a job as press assistant to the President. Then bodies start turning up in DC.”
(courtesy IMDB)

Did you know that a former President Of The United States Of America is a stupid redneck with a sub-human murderous flesh-eating sociopath as his speechwriter? It may come as a surprise to learn that we’re not talking about George W. Bush, but now he’s out of office and presidential archives going back many years are being opened we can at last discuss the 1973 docu-drama about occultism in the dog-eat-dog world of American politics, Werewolf Of Washington (1973).

Some of the events depicted may be a little exaggerated, and some facts have been changed to protect the insufferable – so it’s not really a documentary – and it can’t be called it a dramatisation because of its complete lack of drama. So since it’s not good enough to be either, its a docu-drama. And it’s not selling anything, so it isn’t an infomercial. You may be delighted to know it also isn’t a musical.

I was going to talk about the annoyingly plotless plot device of narrating half the movie before the story even begins (talk about spoilers!). But I’ve changed my mind. Instead I’m going to talk about why I actually like Werewolf Of Washington, beginning with director, writer, producer, editor and all-around bad-ideas-man Milton Moses Ginsberg. His best work may have been editing the Meat Loaf television biography To Hell And Back (2000), but here his inspiration is clearly the Lon Chaney Junior classic The Wolf Man (1941) and the Watergate Hotel scandal.

Werewolf Of Washington was released a few months before Richard Nixon finally caved-in and resigned his presidency. It was hastily written and produced as a topical comedy, so it’s probably a great surprise to everyone involved that the film is still around. By the way, it’s the only film in history in which the word Pentagram is repeatedly mistaken for Pentagon, though the confusion over shape and function is understandable. There are lots of other laughs to be had, some of them might even be intentional, but it’s difficult to tell. It’s a rather cheap and poorly-produced piece of work, but amazingly the acting is half-decent in parts.

There’s former child actor and current geriatric actor Dean Stockwell as our anti-hero Jack Whittier, and its hard to believe he worked on Battlestar Galactica, JAG and Quantum Leap with this film on his resume. More recently he can be seen in the remake of The Dunwich Horror (1970), which is just as bad as the original that also starred Stockwell, proving that some people just never learn. But strangely, he emerges unscathed from these screen bombs, probably by using his more desperate co-stars as human shields. I suspect working with Stockwell is why Katalin Kallay never appeared in another film. It’s a pity, really. She’s the hottest-looking Hungarian translator I’ve ever seen, that’s for sure.

The smarmy Nixonesque president is played by William ‘Biff’ McGuire, a character actor in so many television programs that listing them would be pointless and boring. 1973 was both the high and low point of his film career, appearing in both this monstrosity and the cop classic Serpico (1973) before skulking off into the world of soap operas like Search For Tomorrow. The Stockwell curse again?

And another victim: Jane House, fresh from three years with the soap opera As The World Turns, plays the sublimely sexy first daughter in tonight’s feature. She went on to appear in the television series The Edge Of Night and Friday The 13th: The Orphan (1979), which sounds exciting but has nothing to do with my close but rather socially awkward friend Jason, before embarking on a long and successful retirement. Do you think if Search For Tomorrow and As The World Turns touched they’d cancel each other out? I say its worth a try…

The other actors fared a little better. Clifton James is the oiliest of oily attorneys, the otherwise unnamed Attorney General. He must have been slumming it between the Bond films Live And Let Die (1973) and The Man With The Superfluous Nipple (1974) rather than in desperate need of work, because he escaped the Stockwell Effect. The ramrod-straight police inspector, also short in the name department, is played Thayer David, who appeared in Journey To The Centre Of The Earth (1959), The Eiger Sanction (1975), and Rocky (1976) as well as television shows like Kojak, Starsky And Hutch, and The Amazing Spider-Man. Although he worked fairly consistently after Werewolf of Washington, he died five short years later in 1978 – he may have been acting on borrowed time and was Stockwelled to death for it. 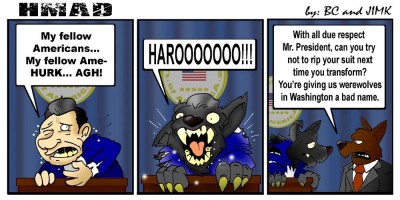 James Tolkan, notable for playing short tough guys, astounds us not even remotely by playing a short tough guy. Not a school superintendent, detective, or military style commander this time, but a shady figure only known as Dark Glasses – obviously Ginsberg was completely out of ideas by this stage. James also played Napoleon in Woody Allen’s Love And Death (1975), always a supporting actor and never a star, I think he only escaped the Stockwellian influence because it was afraid of him!

As I always say, a horror film isn’t quite complete without a midget, so about the only thing Milton Ginsberg did right with Werewolf Of Washington was hiring Michael Dunn. With an IQ of 178 and an accomplished acting career garnering many awards, he is completely wasted as Doctor Kiss, an obvious reference to Henry Kissinger and Dunn’s famous role on television, that of Doctor Loveless in The Wild Wild West. Dunn died not long after this film was completed, in the most rapid and severe Stockwelling in history. So there you have it. If you want a long and successful screen career, don’t work with Dean Stockwell. I never have and look where I am today – oh, crap, there goes that theory.

Who could have guessed that everyone in the White House from the President on down were utter sleazebags? I was completely shocked! One of my favourite scenes is when a well-fed American tries to pin one of Stockwell’s murders on a witness who says “It was a werewolf, you racist pig!” It’s odd that line never made it into the annuls of horror movie history, along with “There’s a herd of killer rabbits headed this way!” and “Let’s split up so we’re easier to pick off one by one”. If this movie has a message at all, it might be if someone says he’s a werewolf who should be locked up before he kills again, believe him – even if he is a journalist.

Now that I think about it, that’s the timeless message of pretty much every werewolf movie I’ve ever seen, but you hear people cry werewolf so often its easy to get blasé. And on that note, whether you like it or not, I’ll be back next week with another bargain-basement B-grader to thrill you, chill you, and fill you with swill for…Horror News! Toodles!