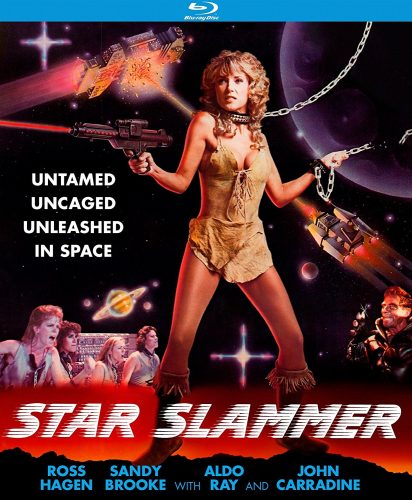 The Shawshank Redemption in outer space. Just kidding. In the near future, two women find themselves framed for crimes they didn’t commit and are both sent to a planet for such hostiles, a place run by a brutal warden who does her best to break them.

If Orange is the New Black had been a popular series in the summer of 1985, I would have sworn that Star Slammer (1986), or Prison Ship, or The Adventures of Taura Part One, or whatever this film decided to call itself, was a direct parody of it set in outer space. The film begins with a pre-credits sequence wherein a mouse robot (voiced by the film’s director, Fred Olen Ray) right out of the Death Star scenes from Star Wars (1977) addresses a woman who is being tortured by Muffin (Dawn Wildsmith) who places leeches on her back. This segues into an obvious Raiders of the Lost Ark theme rip-off over the main credits, so the blockbusters of the day all figured into the making of this film, even by the director’s own admission on the commentary track – he wanted to make a serial like the aforementioned Raiders. Unfortunately, this film possesses none of the excitement or action of those considerably higher-budgeted films and only exists as an excuse to give young teenage boys (back in the 1980’s) something to get their hands in the hopes of seeing beautiful naked women. Even on that front (no pun intended) with all the potential T & A on display, you would figure that there would be loads of gratuitous nudity, however except for some brief seconds of raw footage featuring raw boobage, there is none to be had in this outer space Women in Prison yarn (or yawn if you’re over the age of 20). 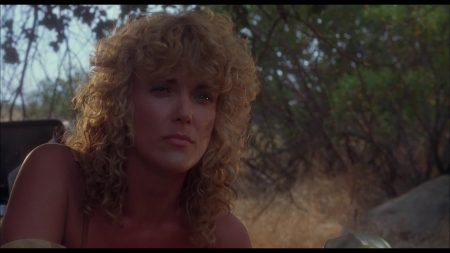 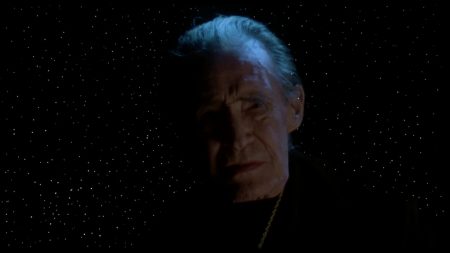 Star Slammer is divided into five chapters though by the end of it you’d swear that the production company was ensconced in Chapter 11 following the release of this effort. It stars Sandy Brooke whom genre fans will remember from Sledgehammer (1985), Deep Space (1988) and Nightmare Sisters (1988). She looks like a cross between Blame it on Rio’s (1984) Michelle Johnson and the 1985 Playboy Playmate of the Month Kathy Shower. She plays Taura and is dressed as though she was a sidekick to Virginia Hey’s Warrior Woman in The Road Warrior (1981). Taura initially threatens an old wizard who looks like Gandalf from The Lord of the Rings on the Planet Arous (in reality the foothills of the San Fernando Valley) after he trespasses, but instead feeds him until The Bad Guy, Bantor (Ross Hagen), and his minions attempt to take away from the wizard a group of crystals that he carries with him. 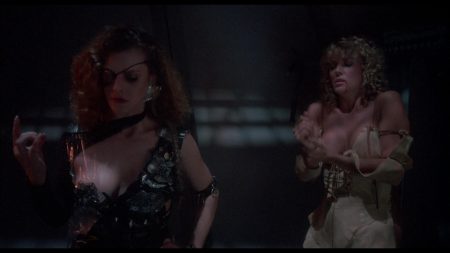 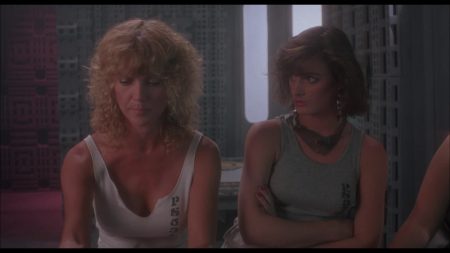 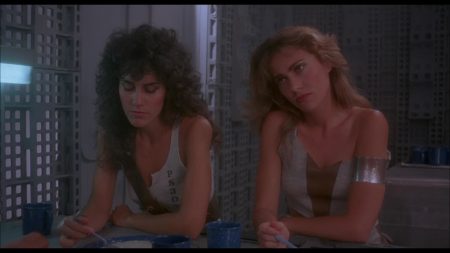 It’s Bantor’s aim to bring the crystals to his masters at The Sovereign. A fight ensues and when the wizard is killed by Bantor, Taura is mistaken to be the murderer. She mutilates Bantor’s right hand with the crystals so he’s sore at her (you can’t blame him). A judge (John Carradine, who takes a hint from Marlon Brando by reading his lines from cue cards) sentences Taura to time on a prison ship headed by Warden Exene (Marya Grant). She finds that a fellow inmate, Mike (Suzy Stokey), wants to keep picking fights with her, while Muffin tortures her every chance that she gets. Bantor then comes back into the picture, still sore about the loss of his right hand. The women all join forces to beat their oppressors. 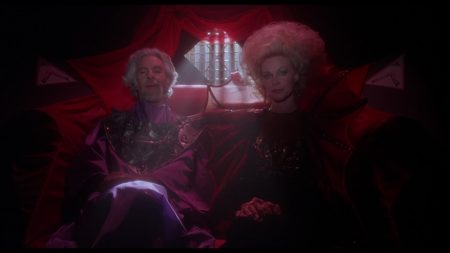 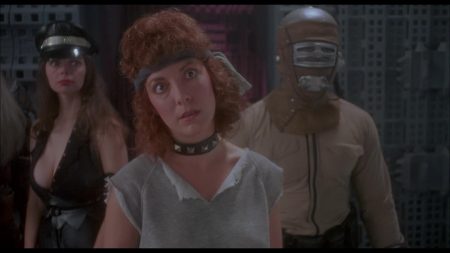 Suzy Stokey, whom genre fans will remember from The Power (1984), The Tomb (1986), and Deep Space (1988), is part of the Fred Olen Ray acting troupe who for a brief time in the 1980’s appeared in these silly, insipid and very often straight-to-video productions that depicted groups of women who look like they stepped out of a modeling magazine in various stages of undress while fighting with and conniving against one another. Star Slammer, like Star Crystal (1986), was thrown together for movie fans who love in-jokes and references to other, more superior films.

The acting is what you would expect from this sort of thing. No one was nominated for Oscars for this one. Bobbie Bresee, whom you’ll recognize from the cult favorite Mausoleum (1983), appears briefly in a cameo. The film ends with the words The Adventures of Taura continue on Chain Gang Planet which thankfully never materialized.

The transfer from Kino Lorber is clearly the best representation of this film on home video, easily besting all previous incarnations including the DVD. For such a low-budget outing, Star Slammer actually boasts a fairly decent production design which, like the Universal horror films, was used on other films. Even the monster from The Deadly Spawn (1983) makes an appearance.

The best reason to purchase the Blu-ray is for Mr. Ray’s highly entertaining and engaging commentary which is chock-full of anecdotes and history regarding much of where the film was shot.