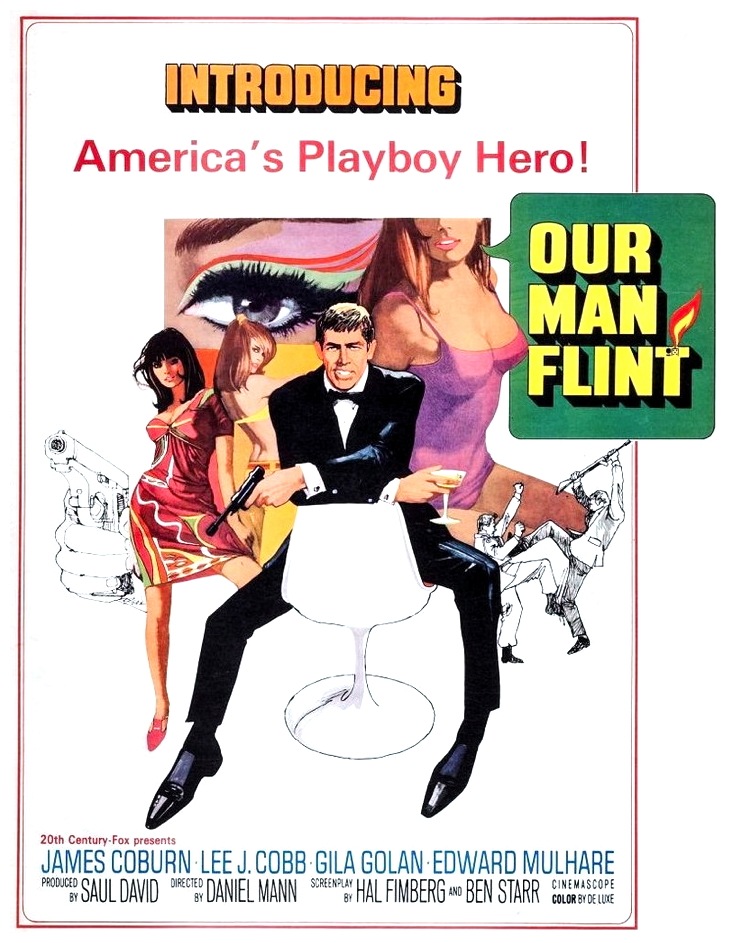 “When the intelligence agencies of the world find that their agents are being murdered at an alarming rate their leaders all write out the qualities an agent will need to succeed against the terrible crisis they are facing. Derek Flint is the only agent with all the qualities, but his old boss refuses to work with him until ordered to by the president. Flint is the worlds greatest secret agent, worlds greatest lover, an expert on electronics and Dolphin speech and goes to Moscow for Ballet (to teach!) When attempts on his life are made, Flint begins to search out the mad scientists who want to remake the world after taking over with the aid of their earthquake machine.” (courtesy IMDB)

The first James Bond movie was Dr. No (1962) directed by Terence Young, a tremendous financial success and it quickly became a trendsetter. By the time the third Bond film was released – Goldfinger (1964) – imitations were already beginning to flood onto cinema and television screens, most of which contained plenty of overt science fiction elements and tongue-in-cheek humour within their stories. On television we had shows like The Man From UNCLE, Amos Burke Secret Agent, The Wild Wild West, The Prisoner, Get Smart and The Avengers. As the Bond franchise continued it became increasingly successful, kickstarting the trend in which SF and camp humour was being incorporated into thrillers during the sixties, a trend which reached boom proportions in the latter half of the decade. Foremost among the Bond imitators on the big screen were the Matt Helm franchise starring Dean Martin, all of which became progressively far-fetched – The Silencers (1966), Murderer’s Row (1966), The Ambushers (1967), The Wrecking Crew (1969) – the various Man From UNCLE feature films created by combining TV episodes and adding extra footage – The Spy With My Face (1965), One Of Our Spies Is Missing (1966), One Spy Too Many (1966), How To Steal The World (1968) – and the two Derek Flint films starring James Coburn – Our Man Flint (1966) and In Like Flint (1967). 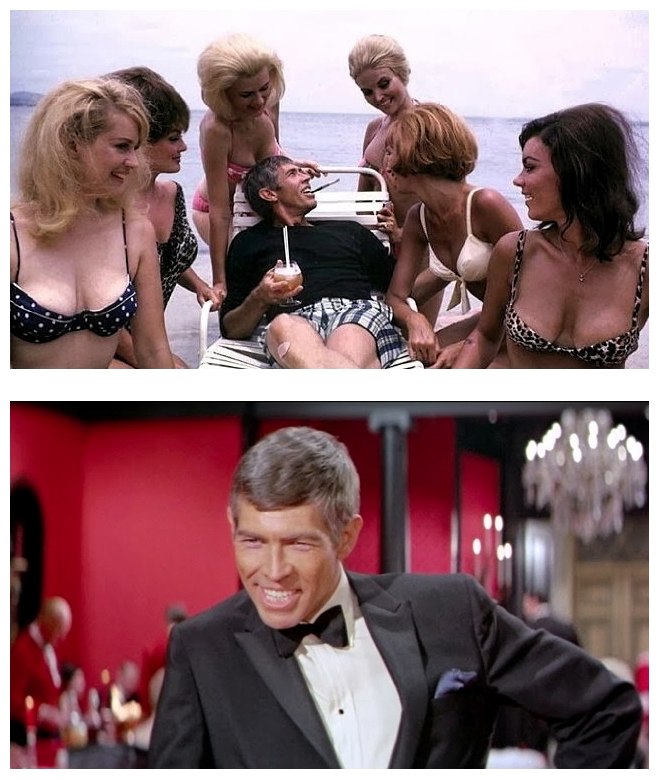 Derek Flint (James Coburn) is America’s answer to James Bond but, unlike his British counterpart, Flint is a bona-fide master of, well, everything: Disguises; Karate; Languages; Gadgets; Ballet; Zen (Flint ‘relaxes’ by suspending his stiffened body between two chairs, one under his head, one under his heels. No special effects or support required, Coburn could actually do this). Women throw themselves at him, and men want to be him. Everybody, that is, except his frazzled old boss Lloyd Cramden (Lee J. Cobb) who, against his better judgement, must persuade Flint to come out of retirement when the evil Galaxy corporation unleash their wicked plot to control the world’s weather. Flint’s globetrotting takes him from New York to Marseilles to Rome and, finally, to Galaxy’s island hideout (which bears a striking resemblance to the Fox Ranch seen in many other films), a spectacular paradise full of bikinied beauties spouting phrases like, “All that is asked of me I shall perform.” 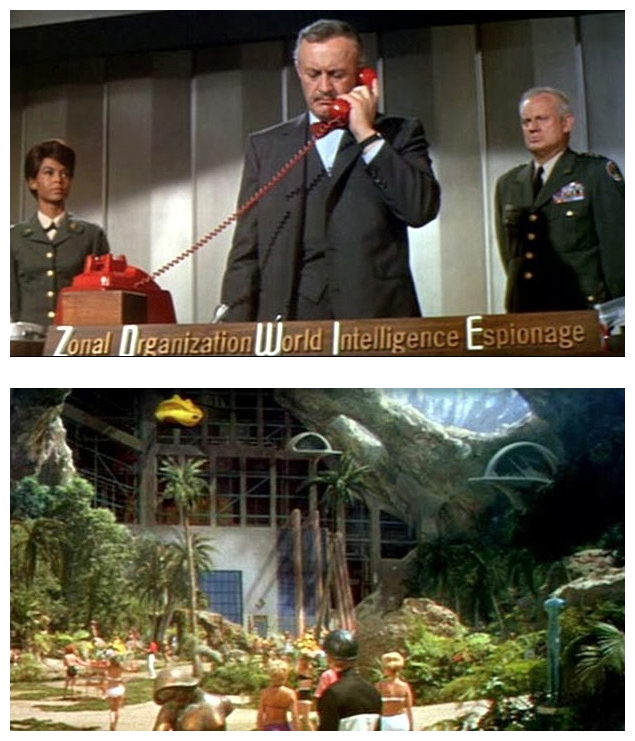 Flint eventually meets the trio of mad scientists in charge of Galaxy: Doctors Krupov (Rhys Williams); Wu (Peter Brocco); and Schneider (Benson Fong). They ask Flint to work for Galaxy, he refuses of course, so is sentenced to death by disintegration (Toughest. Job interview. Ever). To cut a long story short, Flint escapes to sabotage the machinery, rescue his girlfriends – Leslie (Shelby Grant), Anna (Sigrid Valdis), Gina (Gianna Serra), and Sakito (Helen Funai) – and they all flee the island as it explodes. Our Man Flint contains lots of nods to his more famous British counterpart, James Bond, in several silly ways. At one point we encounter a ‘celebrity’ agent known only as ‘0008’ (Bob Gunner, who looks a bit like Sean Connery), a spy with his own series of novels. Flint asks if the criminal organisation known as SPECTRE could be involved, and 0008 replies, “It’s bigger than SPECTRE!” Earlier in the film, Flint is initially offered a Walther PPK and a briefcase with a concealed throwing knife – as seen in Dr. No (1962) – which he dismisses as crude. 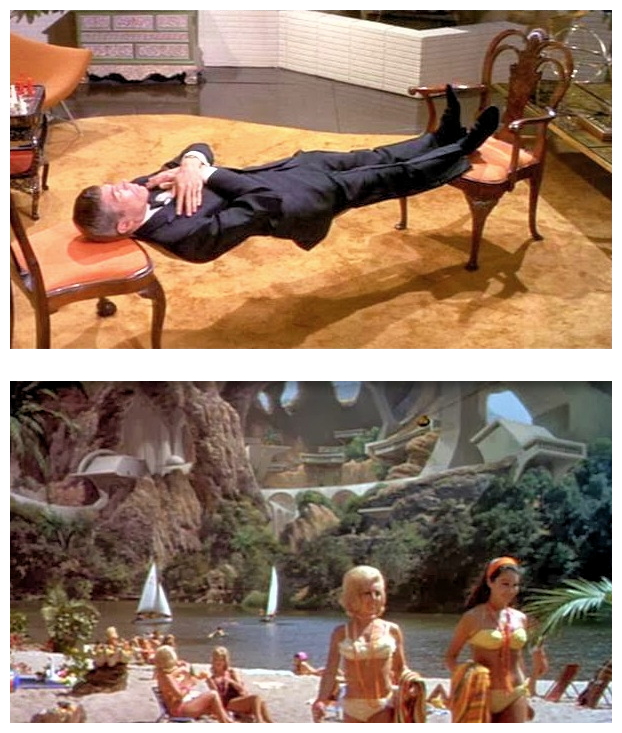 I’m not suggesting Our Man Flint is packed with great lines or good pacing (much of the second half plays like a strangely unfinished rough cut) but if you can’t enjoy Coburn’s toothy performance then check your pulse. If you don’t get a giggle when the ever-game Flint joins these addled island girls for some vigorous go-go dancing, well, you might not be alive anymore. When Flint is attacked by an eagle trained to identify Americans, his response is, “An anti-American eagle? It’s diabolical!” There’s also psychedelic credits, cavernous sets, dodgy matte paintings, and special guest appearances from every computer console ever seen in an Irwin Allen production (the submarine Seaview from Voyage To The Bottom Of The Sea can be spotted, and the Galaxy uniform patches can also be seen in Land Of The Giants). The memorable soundtrack composed by the prolific Jerry Goldsmith (250 credits between 1953 and 2013) also contains a fun song entitled Galaxy-A-Go-Go by the prolific Randy Newman (200 credits between 1964 and 2017), who would later go on to make a zillion dollars writing songs for Pixar movies. Randy is the nephew of composer Lionel Newman, who just happened to be in charge of 20th Century Fox’s music department at the time. 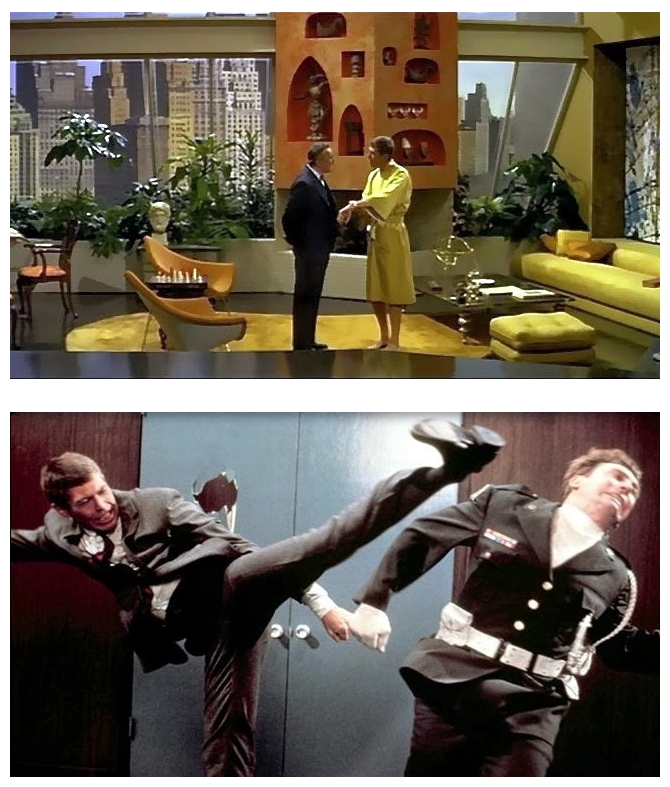 James Coburn appeared in almost two hundred films and TV shows during his 45-year career, finally winning an Oscar in 1998 for his supporting role in Affliction (1997). During the late sixties he became synonymous with everything ‘cool’ and, along with contemporaries like Lee Marvin, Steve McQueen and Charles Bronson, became one of the best tough-guys of his day. His big grin and lanky physique made him ideal for action films like The Magnificent Seven (1960), Hell Is For Heroes (1962), The Great Escape (1963), Charade (1963), Duck You Sucker! (1971) and Cross Of Iron (1977) but today’s cinema-goers would probably recognise his dulcet tones as the voice of CEO Henry J. Waternoose in Monsters, Inc. (2001). Despite being relegated to what is essentially the flustered comedy relief in Our Man Flint, actor Lee J. Cobb is best known for his dramatic roles, from On The Waterfront (1954) to The Exorcist (1973), not only playing arrogant/intimidating/abrasive characters, but also respectable authoritative figures such as judges and police officers. 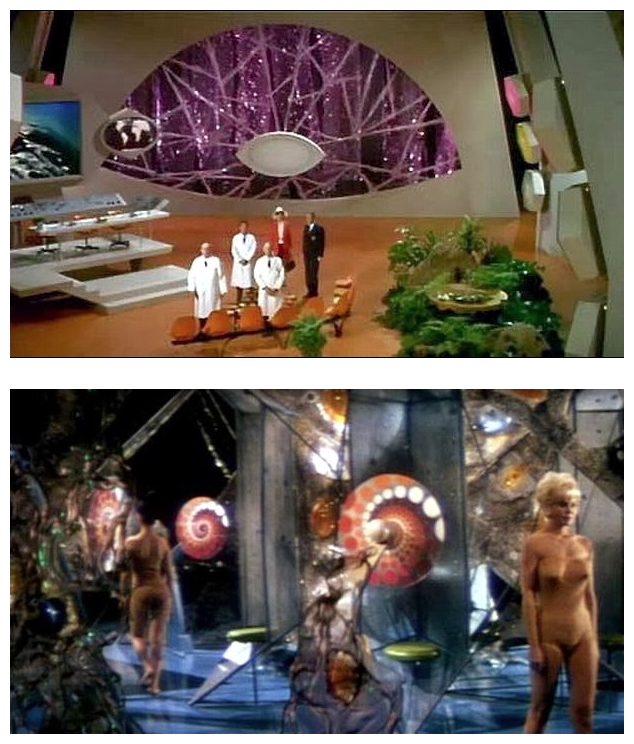 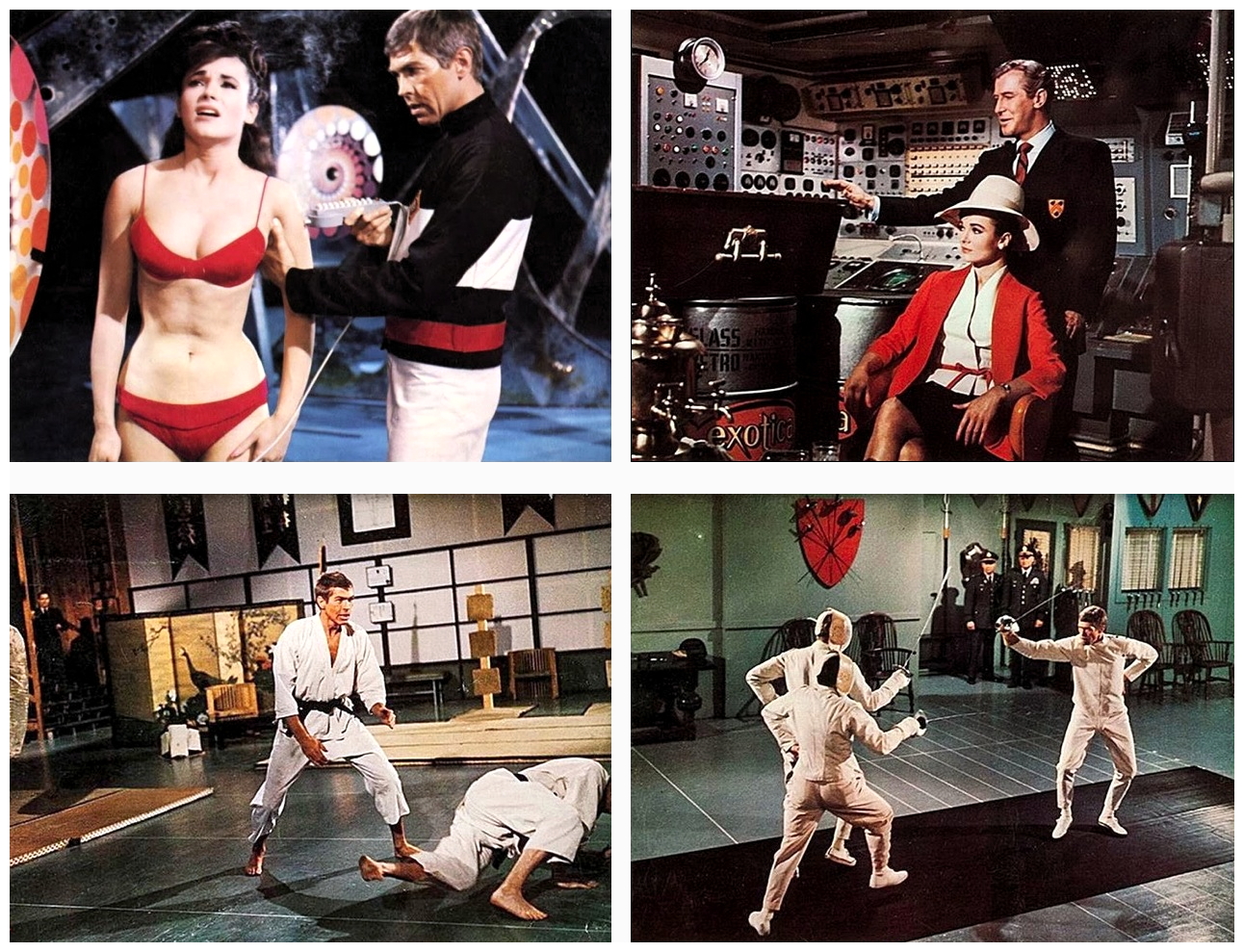 Our Man Flint was an instant box-office hit, quickly quadrupling its US$3.5 million budget, and a sequel was rushed into release the following year. In Like Flint (1967), directed by Gordon Douglas, saw the return of James Coburn and Lee J. Cobb, as well as many of the original’s crew. This time Flint is up against an international feminist conspiracy to replace the patriarchal United States government with one of their own. They kidnap and replace the President, discredit the head of ZOWIE (Zonal Organisation World Intelligence & Espionage) and commandeer a nuclear space platform, all directed from a women’s beauty farm in in the Virgin Islands. Although it contained many of the same elements as the first film, In Like Flint seems to lack the spontaneity and humour that drove the original. New York Times: “Although the film crawls with dime-store beauties, there is a noticeable lack of sexiness in it. Women bent on being tyrants evidently haven’t much time for anything else.” 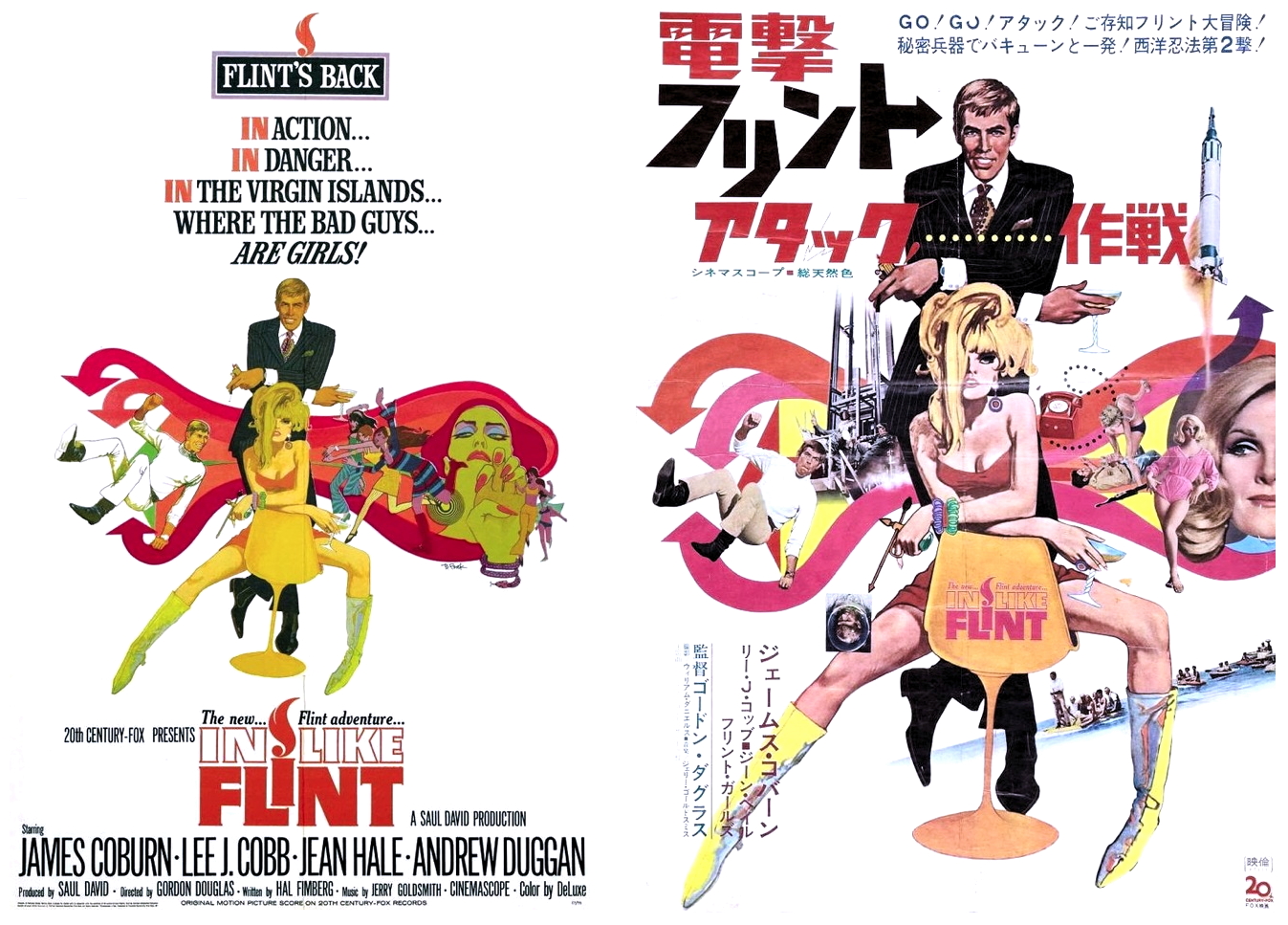 Roger Ebert: “The sexiest thing in the new Derek Flint misadventure, In Like Flint, is Flint’s cigarette lighter which is supposed to know eighty-two tricks, but actually delivers only five, of which one is the not extraordinary ability to clip Lee J. Cobb‘s moustache.” The Flint films have inspired many filmmakers over the years, more recent examples being the Austin Powers (1997) franchise and The Incredibles (2004). Actor Bruce Willis was a great fan of the movies, and insisted on renaming the Die Hard (1988) villain Hans Gruber after a henchman in Our Man Flint, and later had James Coburn (along with his distinctive ZOWIE ringtone) appear in his misunderstood pet project Hudson Hawk (1991), but that’s another story for another time. I’ll now make my fond farewells, but not before politely inviting you to please join me again next week when I fish-out more celluloid slop from the wheelie-bin behind Fox Studios and force-feed it to you without a spoon, all in the name of art for…Horror News. Toodles! 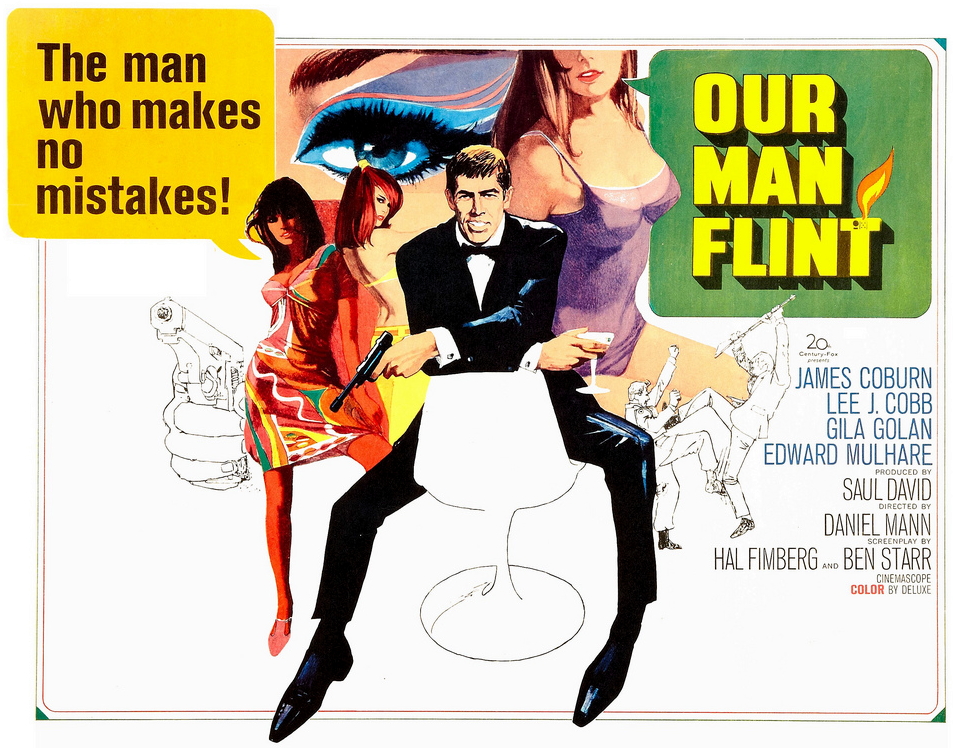 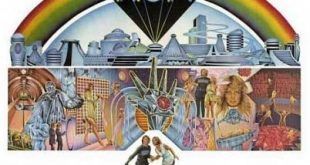 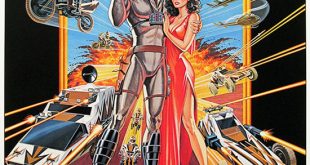