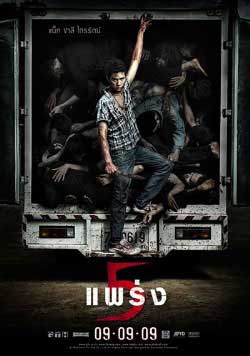 Phobia 2 is dissected into 5 shorts stories; Novice, Ward, Backpackers, Salvage and In The End

Never having seen PHOBIA 1 I had no idea what I was getting into with this Thai film. Turns out it is a anthology film with five different tales and in it’s own language is titles PHAA PHRANG and translates literally into 5 CROSSROADS. The first story is titled ” Novice ” and has to do with a teenage boy who is sent to live and learn with a order of monks in the forest. See, he did something really bad with a rock and is being sent away by his mother and there is a real animosity between him and his moms to where he go as far as to call her a whore! What a little jerk! So he goes into the jungle with the monks and one thing we the audience get to see are these table high up near the trees on stilts.

On these table are gifts to appease the spirits of the forest. I didn’t think much of this. As you would imagine the boy gets bored and hungry and takes off back towards home and gets assaulted by a unseen force and takes refuge in a hut and this is were we finally get a glimpse of the forest spirit and it is more than a spirit. First of all it is tall! The closest I can compare it to is Pumpkinhead….but bigger! And even though it is created through cgi it looks good, way better than alot of crap on the SyFy channel. Overall though ” Novice ” is a mildly interesting but flawed entry into this anthology. It does have a brutal and violent ending but I wish there had been a little more back story and more of the monster.

The second story is ” Ward ” and it is the tamest of all the stories as well as the shortest and it is about a motorcycle accident victim recuperating in a hospital room with a half dead half ghostly roommate and for me equaled to a lukewarm episode of Tales From The Darkside or Monsters and even Freddys Nightmares. Do you remember Monsters and Freddys Nightmares!??!

I will go ahead and proclaim that ” Backpackers ” is my favorite entry in the PHOBIA 2 anthology. I really like the way it begins. It has a slight Texas Chainsaw Massacre feel but also just the feel of a late 70’s or early 80’s horror movie. Of course it begins with two Japanese backpackers, a guy and a girl, traveling though Thailand. It felt like this story could go anywhere. It could have gone a supernatural route or turned into a monster flick. I really was hoping ” Backpackers ” would be a Texas Chainsaw Massacre or Hills Have Eyes fight for life, attack on the senses, non stop screaming, gore and blood caked cannibal feast fest, but it didn’t. But it is still pretty good and I didn’t expect where it was gonna go.

The hitch hikers get picked up by two brothers in a big white delivery truck and almost from the moment they get picked up you get the feeling that something is very wrong. Then we hear banging from the back of the truck that scares the two kids as well as alarms the brothers. They stop the truck to check the back of the truck and when they open it up you see the back is filled with dead bodies. Right away it reminded me of the stories we get down here in Texas about human trafficking. The human traffickers are called coyotes down here and they smuggle people across the border and every once in awhile you will here about a truck just like the one in ” Backpackers ” filled with dead bodies, dead from the heat and suffocation.

I thought ” Backpackers ” was going to be about the consequences of running into human traffickers and turn into something like Hostel….but better. And while that may have been a good route to go I couldn’t believe where it went. Okay I could believe it but it was still really surprising! Zombies! That’s what it is, zombies! And the way I look at it it could have been connected to the worldwide plague that infects the universe of the Day Of The Dead remake. These zombies are fast and vicious and I felt that jolt of revulsion I got from watching the first ten minutes of the Day Of The Dead remake. I totally recommend seeking out PHOBIA 2 for this segment if you really like zombies and maybe you can see it on the internet somewhere or on you tube. It really works as a short film and all the people that play the zombies are really good, really convincing.

The fourth story is called ” Salvage ” and again even though it is your typical ghost revenge tale for some reason, it is kind of fresh, maybe cuz it’s Thai and not Japanese. And I gotta mention that the main character, Nuch, and one of the minor female characters in the beginning are really, really pretty older women and great to look at. I had to mention this because it was hard not to notice their hotness.
Nuch is a used car saleswoman who deals in cars that are not just lemons, but haunted lemons! And the ghostly horror begins when her son disappears on the car lot. This one is not too original but mostly it works and the special effects are very good.

The fifth and final story is ” In The End ” and concerns a group of young Thai film makers making a ghost story movie in the tradition of RINGU, THE GRUDGE, A TALE OF TWO SISTERS, and any other Asian ghost movie you can think of. But again this segment is kept somewhat fresh by the blurring of the lines between reality and the universe of film making, and while this is the last entry of PHOBIA 2 it is light on scares they do a good job of poking fun at the genre of Asian ghost movies and at the process of making a horror movie. But they do not belittle the genre and I could tell the film makers really care about these kinds of movies. I know I do! There are a few scares though and the make up for the ghost girl actress is really good and when they try to make her look creepy and scary they are able to pull it off. ” In The End ” also made me laugh and there was one point where I realized these guys were not serious and were just trying to have a good time making a fun little short film.

Off the top of my head the only other Asian anthology piece I can think of is ” 3 EXTREMES ” which in all honesty is better than PHOBIA 2 and PHOIBA 2 lags far behind the ultimate horror anthology ” CREEPSHOW ” which no other anthology horror flick even comes close to but in my awesome opinion PHOBIA 2 is pretty good. It looks great and all the actors do a good job and the special effects are great. What the hell more do you want? And remember ” BACKPACKERS “! It’s definitely the best short foreign zombie film I have ever seen. Not that I have actually seen any other short foreign zombie films or that many American short zombie films but ” BACKPACKERS ” deserves a peek by the hardcore elite zombie fan. Okay. 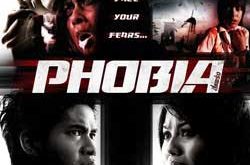 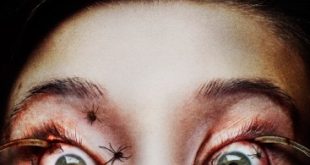