Home | Articles | Scooby-Doo, Who Are You? 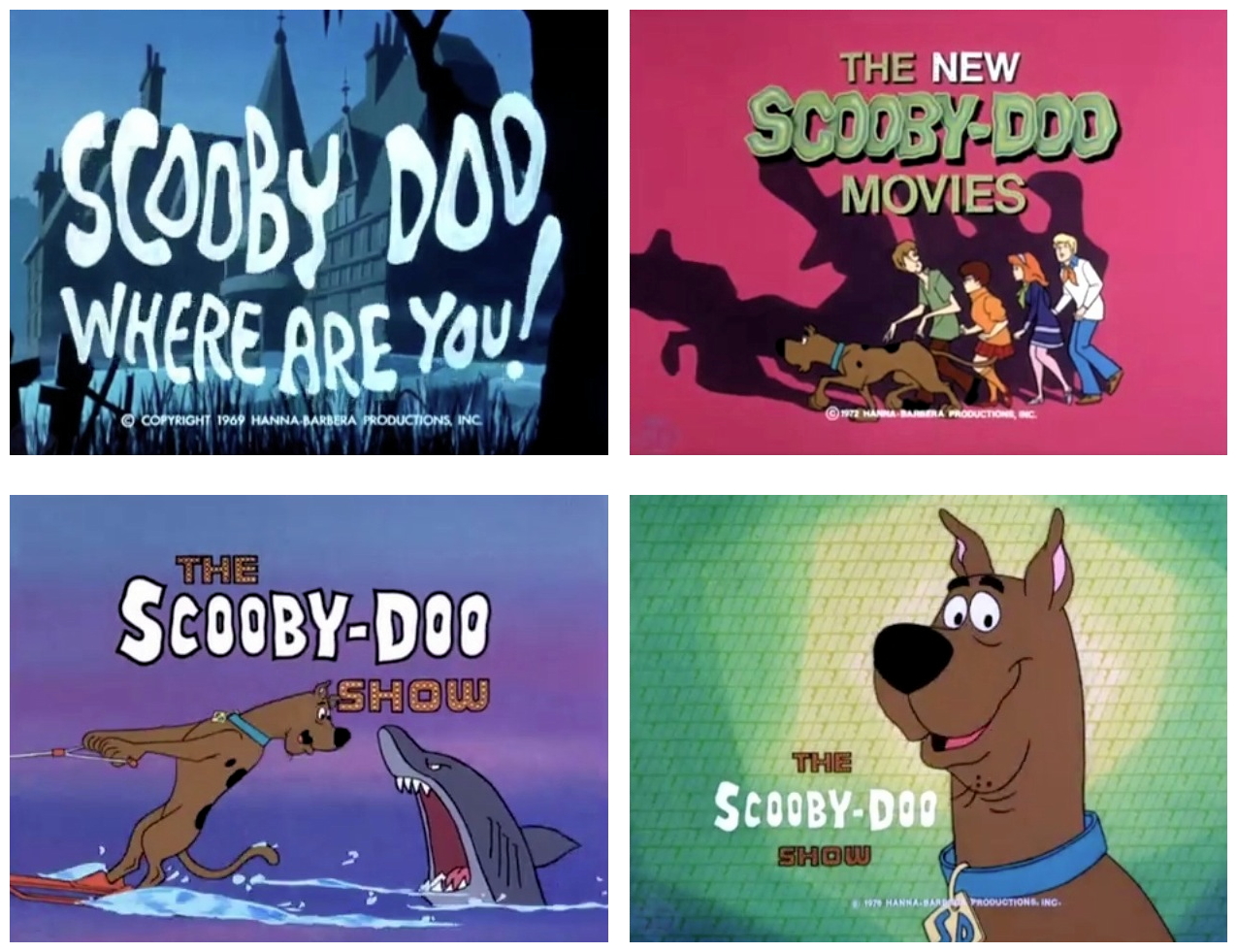 Headless spectres, giant insects, demon sharks, vikings, werewolves, pterodactyls, kelp creatures, faceless zombies, moon monsters – since debuting in 1969 there’s been no mystery too great to deter the intrepid Great Dane and his four mod buddies from southern California. How did a phrase from a Frank Sinatra song become the name for one of the best-known cartoons in the world, epitomising the finest in canine bravery and extracurricular sleuthing? Before he became head of programming at CBS and developed iconic situation comedies such as The Mary Tyler Moore Show, All In The Family and M*A*S*H, Fred Silverman was in charge of daytime content for the network. Wanting to steer cartoon adventures away from superhero shenanigans, Silverman came up with a concept combining the popular forties radio program I Love A Mystery, and the sixties sitcom The Many Loves Of Dobie Gillis, which notably featured a bearded beatnik played by young Bob Denver. 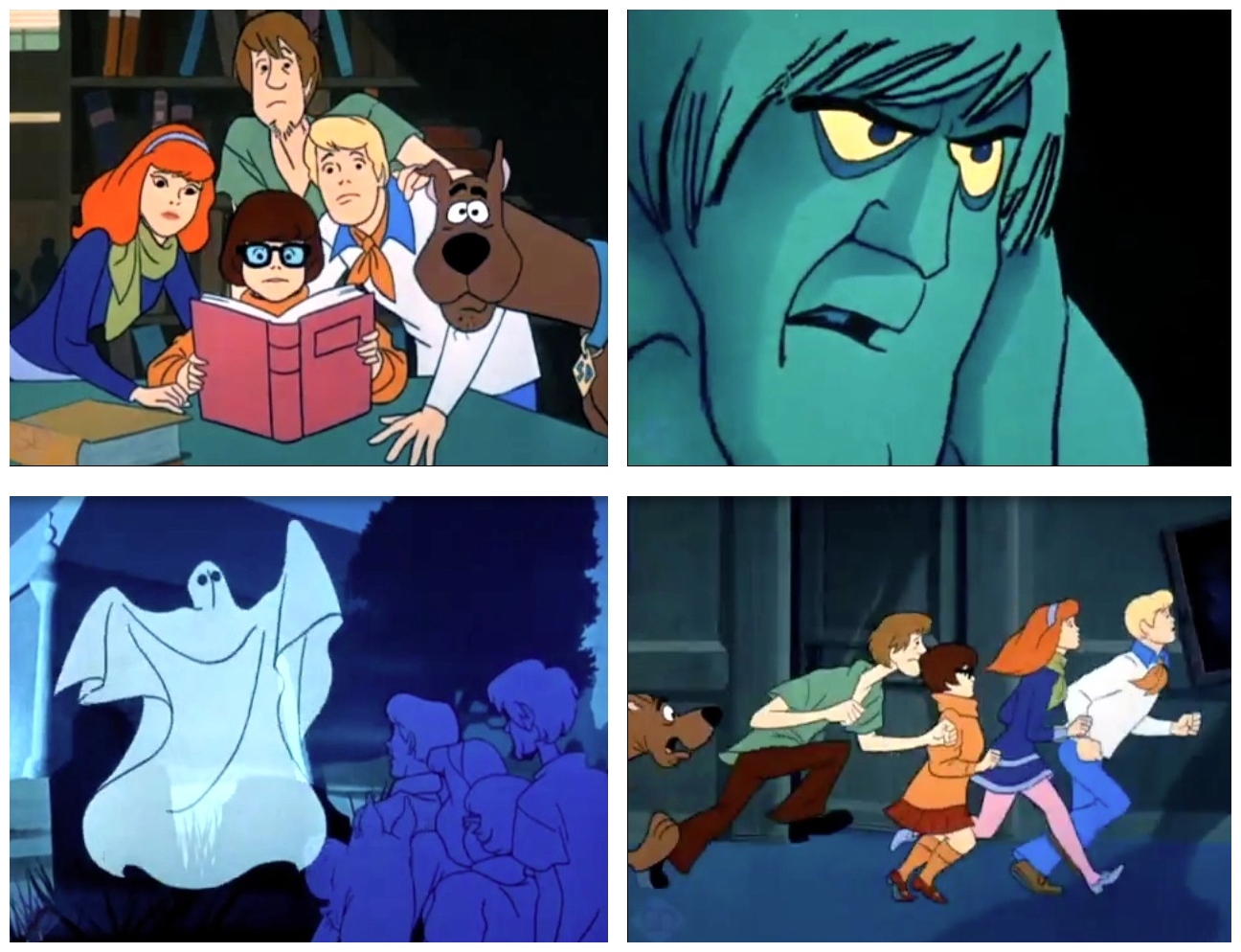 Silverman’s baby would be passed on to Hanna-Barbera studios for love and attention. Bill Hanna and Joseph Barbera, veteran animators of Tom & Jerry, were refining their craft of no-frills animation, necessary because of the shoestring budgets offered by the networks. Hanna-Barbera had managed to score big by basing their cartoons on live-action sitcoms – The Flintstones (1960) was a modern stone-age family based on The Honeymooners starring Jackie Gleason, while Top Cat (1961) took its cue from Sergeant Bilko in The Phil Silvers Show. They were also the first to get into the act of turning show-business personalities into cartoons, like Abbott & Costello (1965) and Laurel & Hardy (1966). Bringing Silverman’s vision to life would require invention and innovation, and The Mystery Five (as it was originally called) would involve four teenage detectives with a pet Great Dane in a minor role. 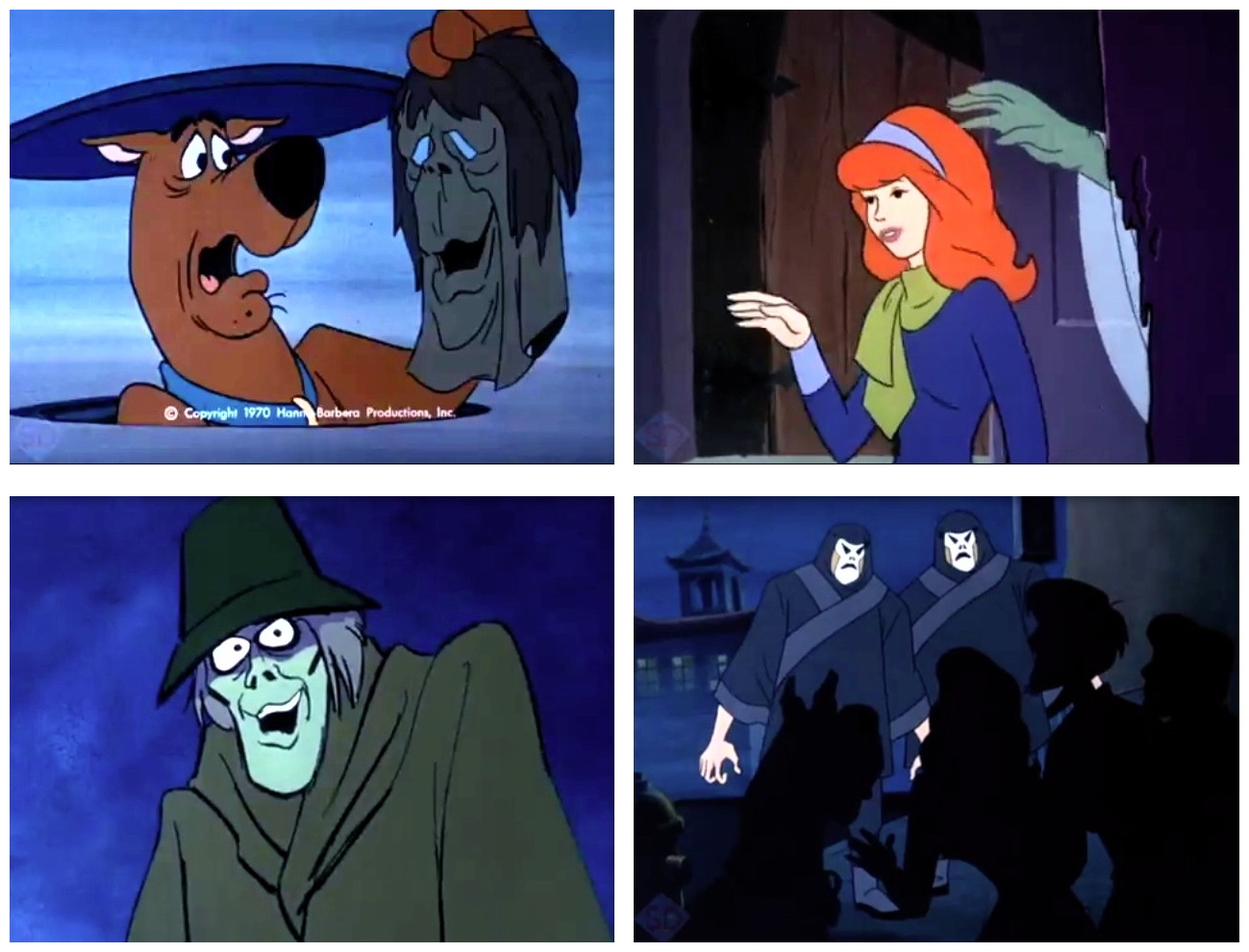 CBS president Frank Stanton rejected this initial concept declaring the artwork was too scary for kids. Flying back to Los Angeles after Stanton’s rejection, Silverman’s inspiration would come as he listened to Sinatra’s Strangers In The Night which features the phrase, “Scooby-Dooby-Doo.” The Great Dane would become the star of the show and the title would be a rollicking tongue-roller – Scooby-Doo, Where Are You! – reflecting a more comical direction for the series. Don Messick – better known for voicing Boo Boo in The Yogi Bear Show – would give the seven-year-old pooch Scooby-Doo his trademark baritone yelp, while American Top 40 disc-jockey and vegetarian Casey Kasem would play the role of his bell-bottom-wearing companion Norville Rogers, better known by his nickname Shaggy. The rest of the gang is made up of fearless leader Fred (voiced by Frank Welker), pretty damsel-in-distress Daphne (voiced by Heather North) and the bespectacled brains of the gang, Velma (voiced by Nicole Jaffe). 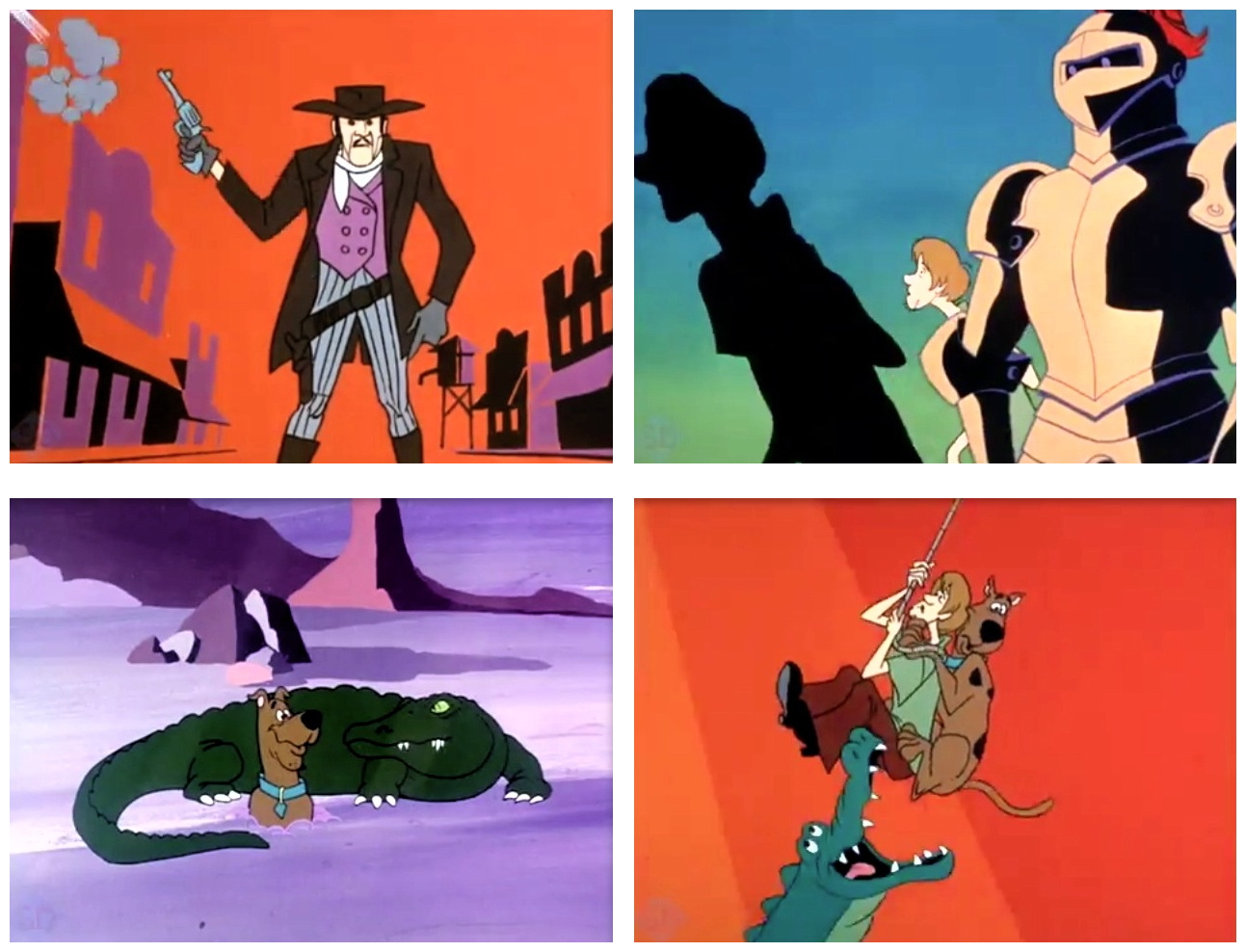 Since debuting in 1969, Scooby and the gang have undergone changes in programming formats with slight variations to the names of the show. The New Scooby-Doo Movies (1972) was the first change and extended the thirty-minute cartoon to an hour long, and featured many popular celebrities of the time in their cartoon incarnations: Don Adams from Get Smart featured as an exterminator; big Mama Cass Elliott of The Mamas & The Papas appeared as the owner of a candy factory where two sinister globs are running amuck; Davy Jones of The Monkees sang I Can Make You Happy; the Scooby gang even picked up Sonny & Cher one dark and stormy night when the couple’s car broke down. Scooby’s extended canine family have also enjoyed the spotlight – most infamously Scrappy-Doo who co-stars with Scooby when the series was renamed Scooby & Scrappy-Doo (1979). 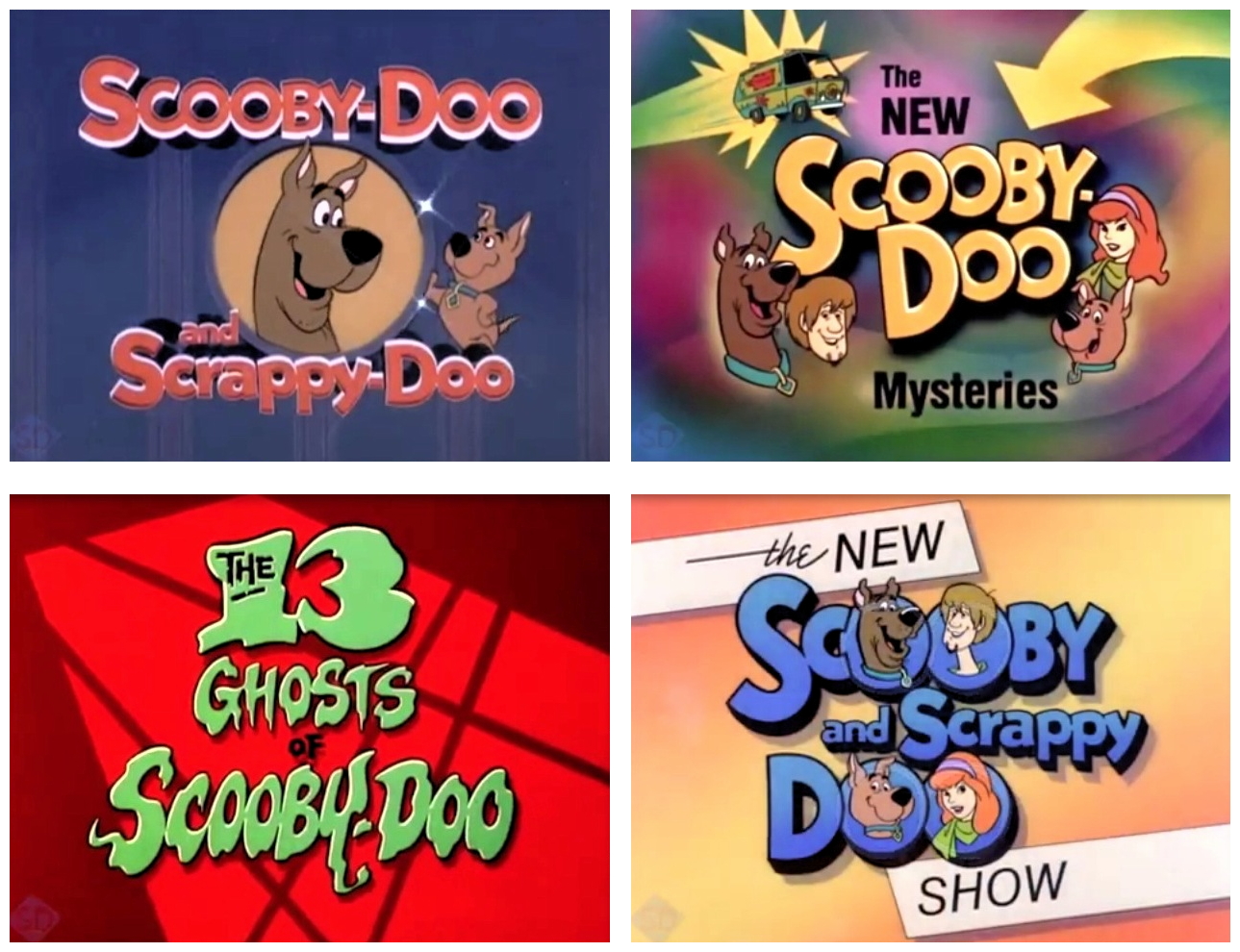 Reruns of Scooby-Doo have been in syndication since 1980. In 1993, A Pup Named Scooby-Doo ended its network run on ABC, and began reruns on the Cartoon Network. With Turner Broadcasting purchasing Hanna-Barbera in 1991, the Scooby-Doo franchise became exclusive to the Turner networks. In 1996 Turner merged with Warner Brothers and, with Scooby-Doo’s restored popularity in reruns, they began producing one new Scooby-Doo direct-to-video movie a year beginning in 1998. These movies featured a slightly older version of the original five-character cast: Scooby-Doo On Zombie Island (1998), Scooby-Doo & The Witch’s Ghost (1999), Scooby-Doo & The Alien Invaders (2000) and Scooby-Doo & The Cyber Chase (2001). Frank Welker was the only original voice cast member to return for these productions. Don Messick had passed away in 1997 and Casey Kasem, a strict vegetarian, quit in 1995 after being contractually obligated to provide the voice of Shaggy in a Burger King commercial. 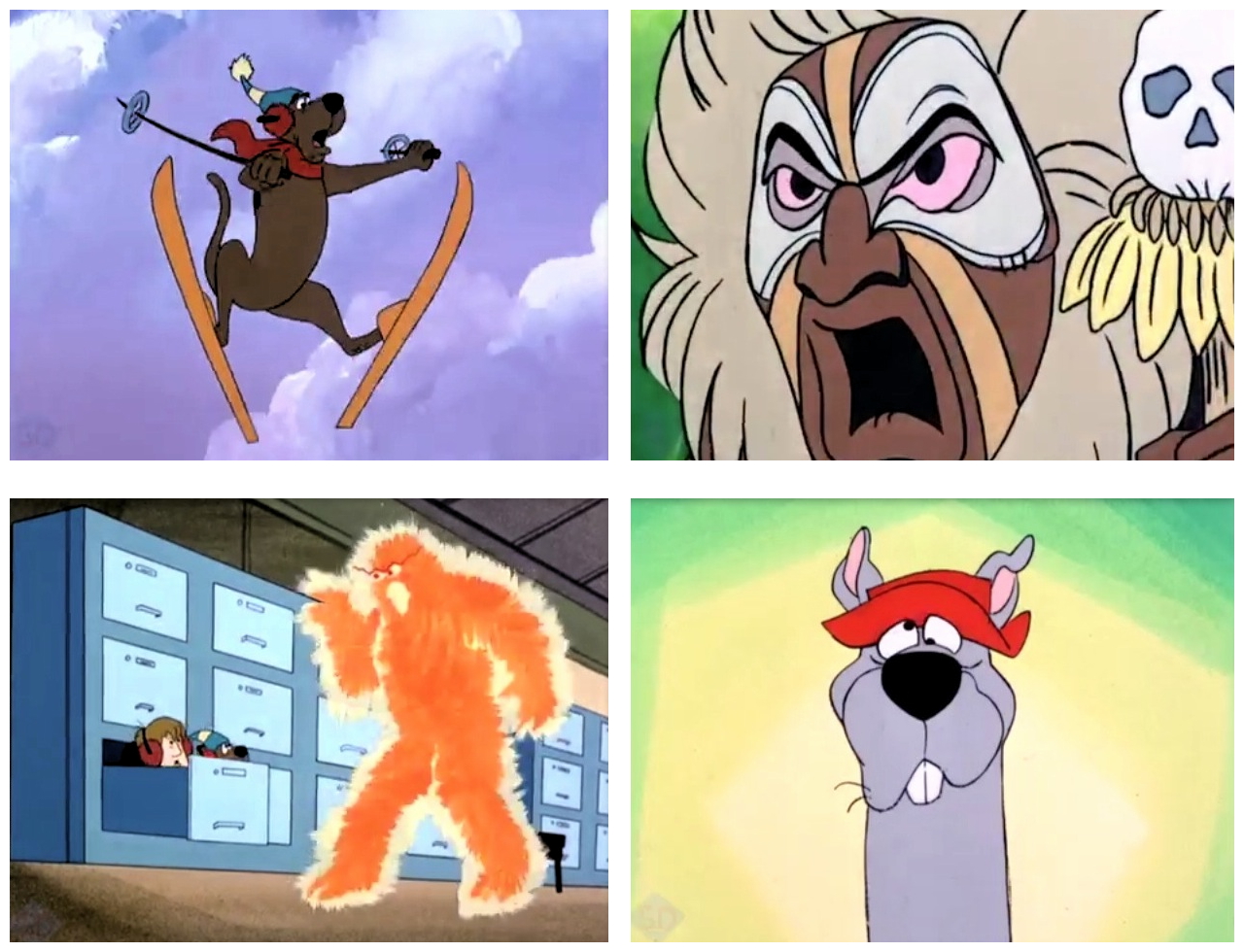 Scott Innes took over as both Scooby-Doo and Shaggy, although Billy West played Shaggy in Scooby-Doo On Zombie Island. B.J. Ward took over as Velma, and Mary Kay Bergman voiced Daphne until her death in 1999, and was replaced by Grey DeLisle. Come the new century, the longevity and affection for the series was reflected in the making of two live-action film versions. Scooby-Doo (2002) was directed by Raja Gosnell and starred Freddie Prinze Jr as Fred, Sarah Michelle Gellar as Daphne, Linda Cardellini as Velma and, in an inspired piece of casting, Matthew Lillard as Shaggy. Despite the fact that Scooby had become a rather poor computer-generated special effect voiced by Neil Fanning, the film was a box-office hit taking more than US$130 million on its initial release. Cast and crew were reunited for the sequel Scooby-Doo 2: Monsters Unleashed (2004), which also made a profit, but not enough to warrant a third feature film. 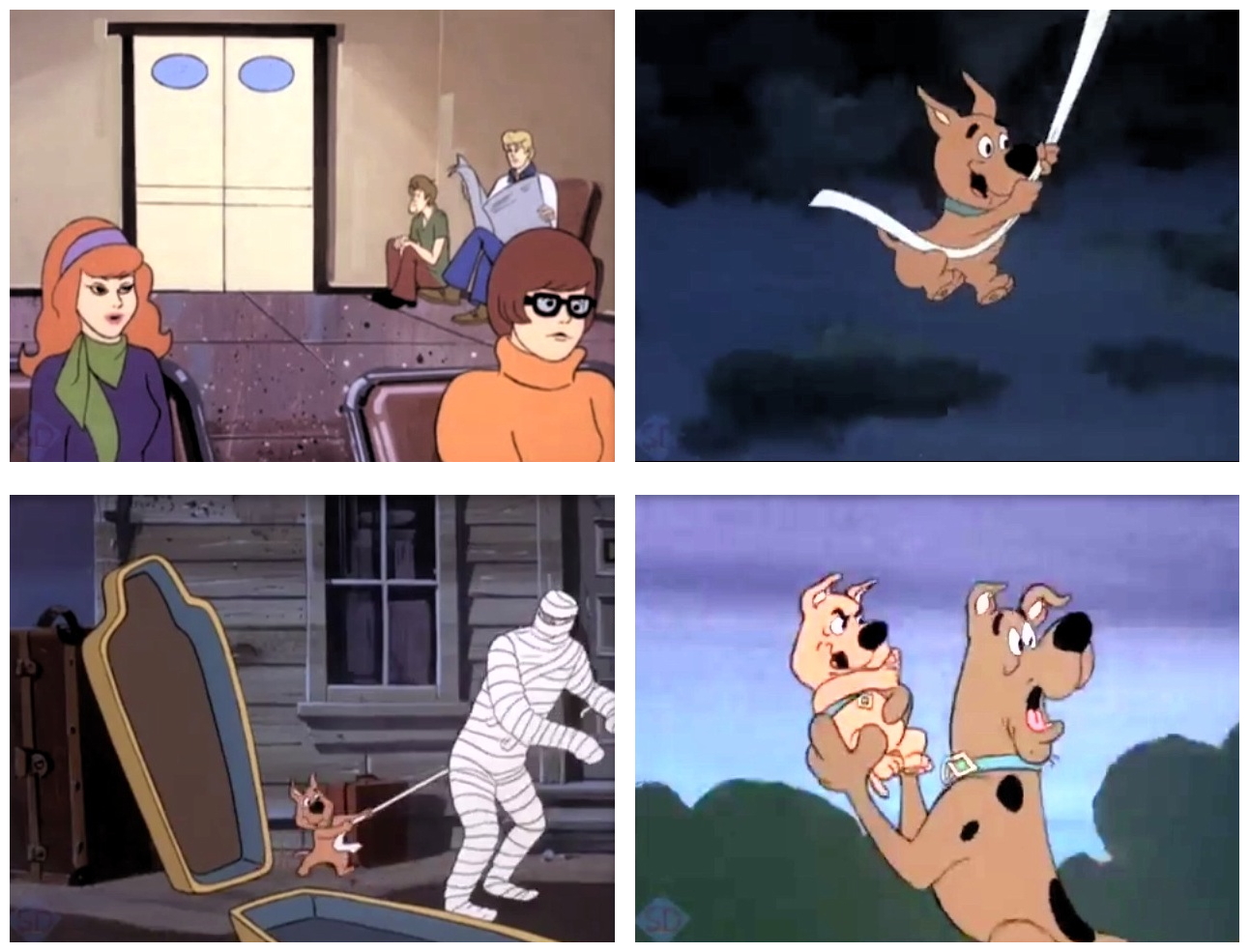 The direct-to-DVD animated movies continued with at least one entry per year. Scooby-Doo & The Legend Of The Vampire (2003) and Scooby-Doo & The Monster Of Mexico (2003) were made in the style of the original 1969 series, while the movies made between 2004 and 2009 were done in the style of What’s New Scooby-Doo? using that show’s voice cast. Following the success of the reruns, DVDs and feature films, Scooby-Doo returned to Saturday mornings for the first time in seventeen years with What’s New Scooby-Doo? which aired from 2002 until 2006. Produced by Chuck Sheetz fresh from The Simpsons, the format follows the original series but places it firmly in contemporary times, with modern culture references and technology (computers, internet, mobile phones, etc.). Frank Welker voiced both Fred and Scooby, Casey Kasem returned as Shaggy (on the strict condition that the character be depicted as a vegetarian), Grey DeLisle as Daphne, and former Facts Of Life actress Mindy Cohn as Velma. 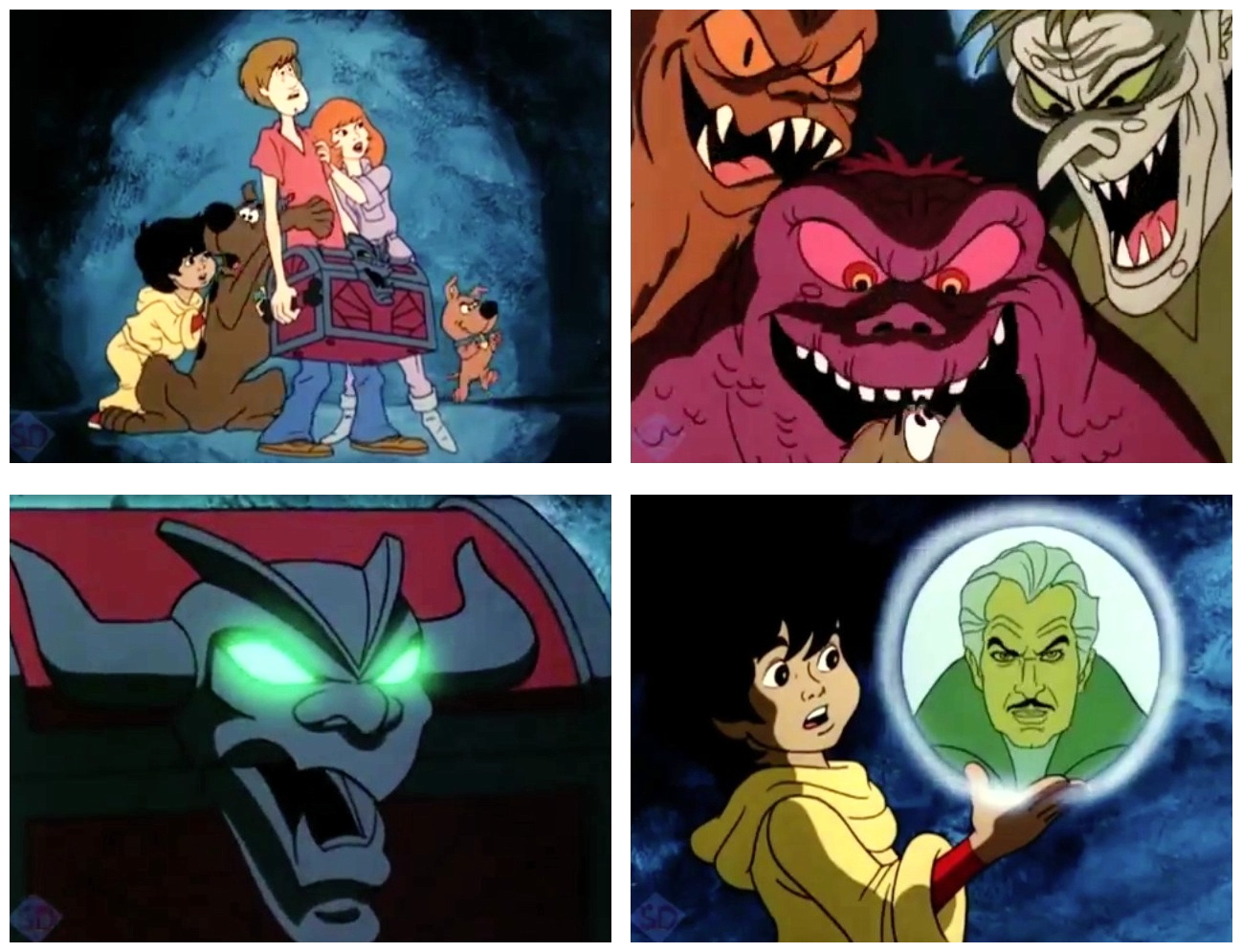 After three seasons, What’s New Scooby-Doo? was revamped in 2006 as Shaggy & Scooby-Doo Get A Clue! in which Shaggy inherits money and a mansion from his Uncle Albert (voiced by Casey Kasem), an inventor who has gone into hiding from villains trying to steal his inventions. Shaggy and Scooby handle the plots alone – except for a couple of cameo appearances, Fred, Daphne and Velma are absent. To celebrate the fortieth anniversary of the show, a live-action made-for-TV movie called Scooby-Doo: The Mystery Begins (2009) was broadcast, starring Nick Palatas as Shaggy, Robbie Arnell as Fred, Kate Melton as Daphne, Hayley Kiyoko as Velma, and Frank Welker as the voice of Scooby-Doo. This proved popular enough for a second live-action TV movie entitled Scooby-Doo! Curse Of The Lake Monster (2010). The next Scooby series, Scooby-Doo! Mystery Incorporated, premiered in 2010. 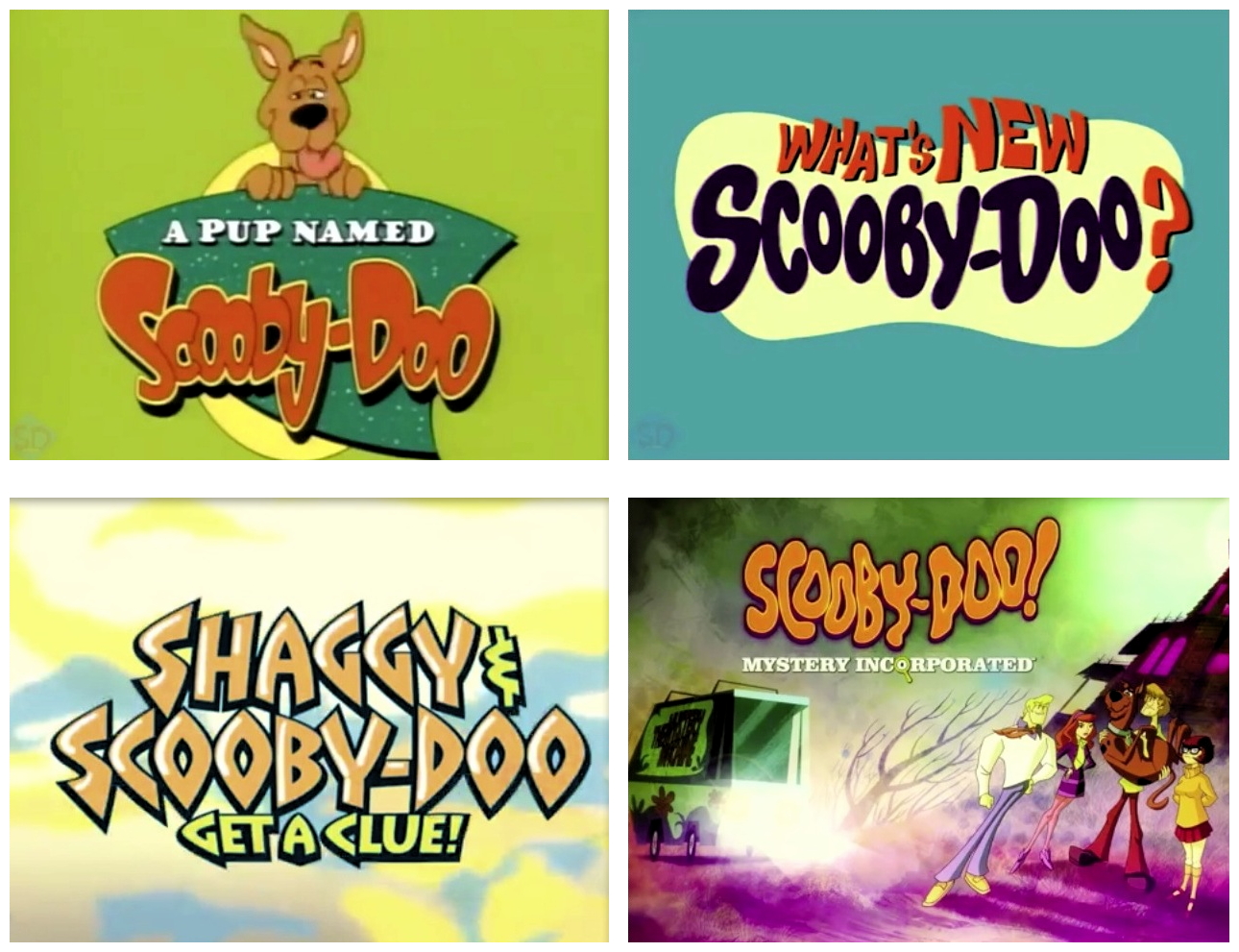 The first Scooby series produced for cable, Mystery Incorporated is actually a reboot re-establishing relationships, personalities and locations, as well as extending their world to include their parents, high school and neighbours. It also borrowed from Scooby’s long history, as well as characters and elements of other Hanna-Barbera shows. Welker, Cohn and DeLisle continued in their respective roles, and Matthew Lillard voiced Shaggy, supported by a terrific cast including Patrick Warburton, Tim Matheson, Tia Carrere, Udo Kier, Gary Cole, and Casey Kasem in his final role as Shaggy’s father. The series was broadcast as a 52-chapter animated serial, and an overarching mystery surrounding the gang’s hometown of Crystal Cove in California became the main story arc, with pieces to the mystery unfolding episode by episode, which also included romantic entanglements and interpersonal conflict between the lead characters. The series ran for two seasons with a three-part finale airing exactly three years from its debut. 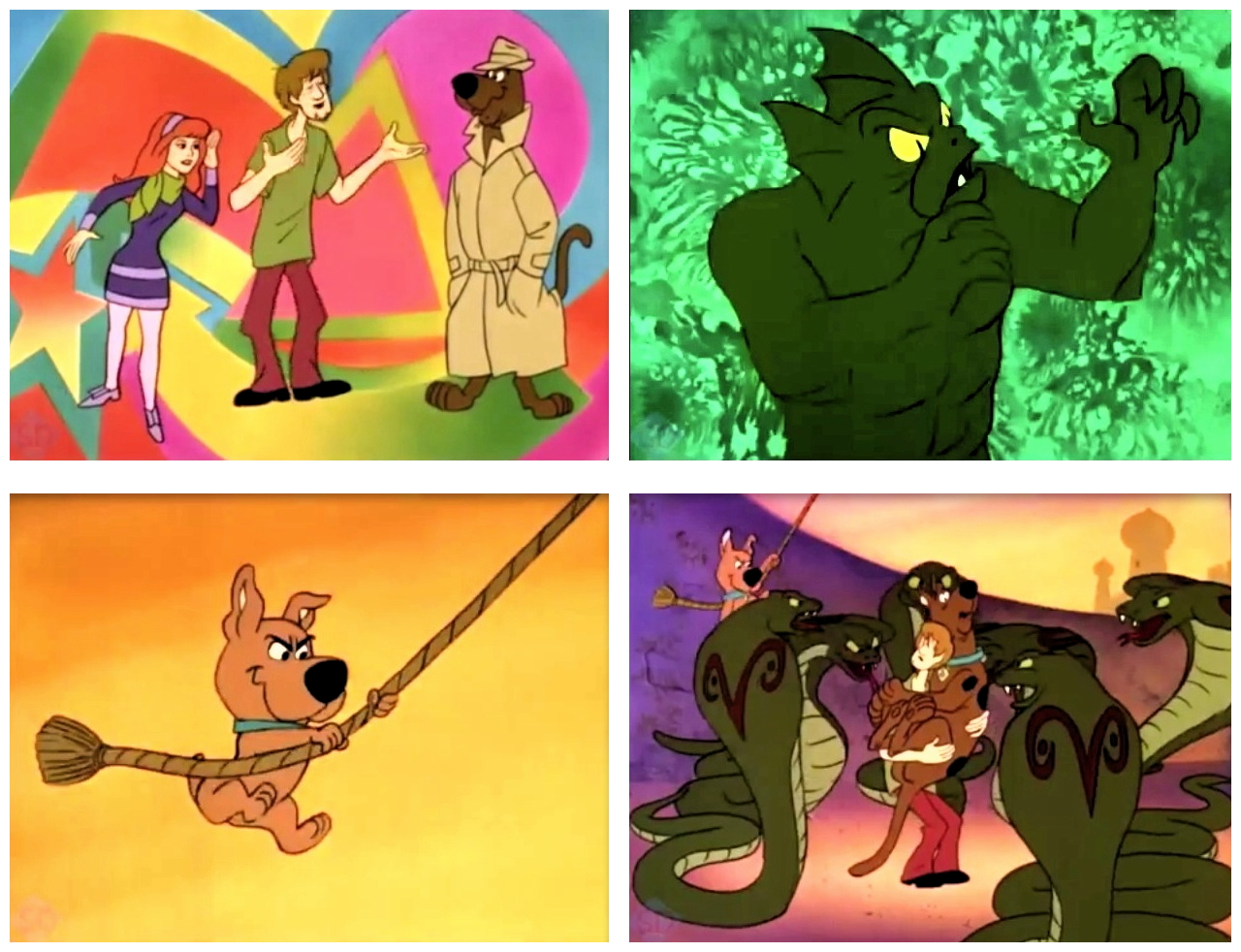 More recently, Warner Brothers announced in 2015 that Tony Cervone was signed to direct a CGI animated film entitled S.C.O.O.B. (2018), the first film in a planned Hanna-Barbera Cinematic Universe. During its four decade broadcast history, Scooby-Doo has received two Daytime Emmy nominations: one for A Pup Named Scooby-Doo; and one for Mindy Cohn‘s vocal performance in What’s New, Scooby-Doo? Respected scientist Carl Sagan praised the show’s predominantly skeptic-oriented formula and thought an adult version of Scooby-Doo would be a great public service. It held the Guinness World Record for having the most episodes of any animated television series ever produced (recently surpassed by The Simpsons). Entertainment website IGN listed Scooby-Doo at #24 on its Top 100 Best Animated Television Shows. 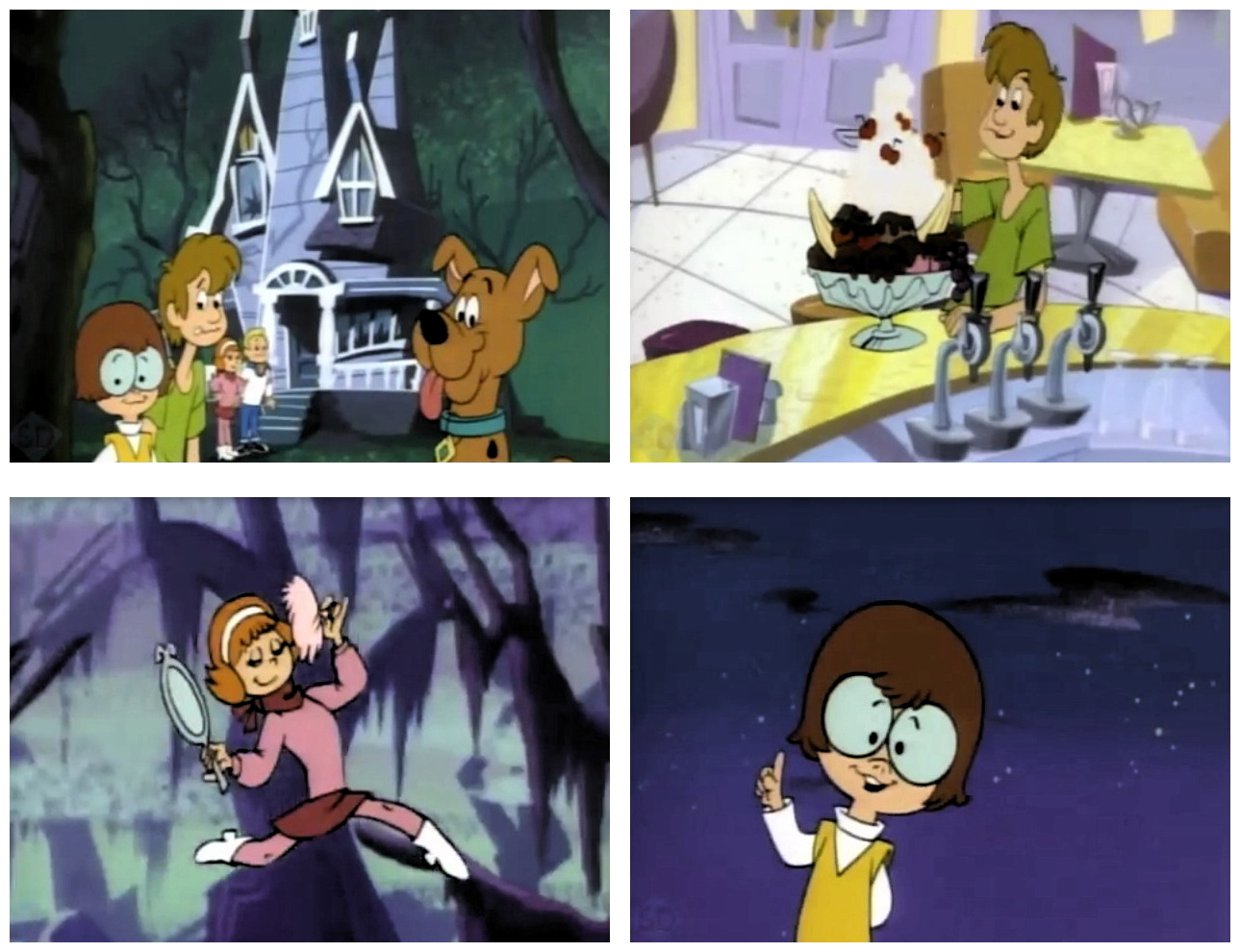 Scooby-Doo has maintained a significant viewership which has grown steadily since the nineties, popular with both younglings and nostalgic adults, and has become a trusted brand name which guarantees a particular sort of quality. “Overall, Scooby-Doo is just not a show that is going to overstimulate kids’ emotions and tensions. It creates just enough fun to make it fun without getting them worried or giving them nightmares.” (David Kleeman of the American Centre For Children & Media). As Fred Silverman and the Hanna-Barbera staff had planned when they first began producing the series, Scooby-Doo’s ghosts, monsters and spooky locales tend to bend more towards humour than horror, making them easily accessible to younglings, but some teenagers and adults enjoy Scooby-Doo because of presumed subversive themes and theories: Does Shaggy smoke dope? Does Velma prefer the company of women? Is Fred a control freak? 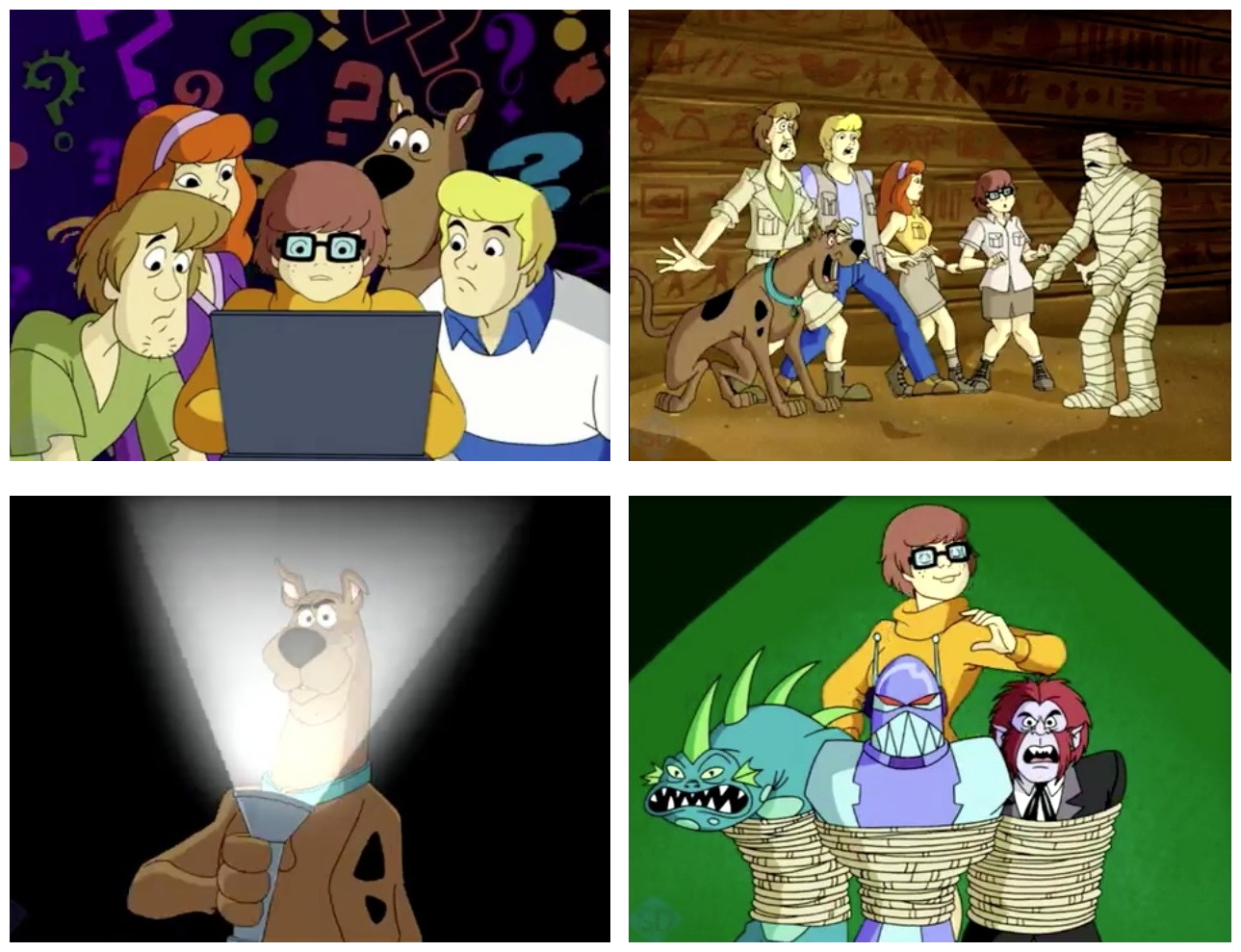 It should be noted that producers Joe Ruby and Ken Spears never intended such adult themes, and always denied their characters to be into drugs in any way. It’s with this bombshell I’ll bid you farewell and ask you to join me here next week on Horror News, because my horoscope said that if you don’t read all my reviews, the Earth would be destroyed by a disaster of biblical proportions, you know, real wrath-of-God type stuff – fire and brimstone falling from the skies, rivers and seas boiling, forty years of darkness, earthquakes, volcanoes, the dead rising from the grave, human sacrifice – you get the picture. Normally I’m highly skeptical of such claims, but I read it on the interweb, it must be true. So sleep well, enjoy the next seven days and remember, the survival of the entire world depends on you visiting Horror News every week! Toodles! 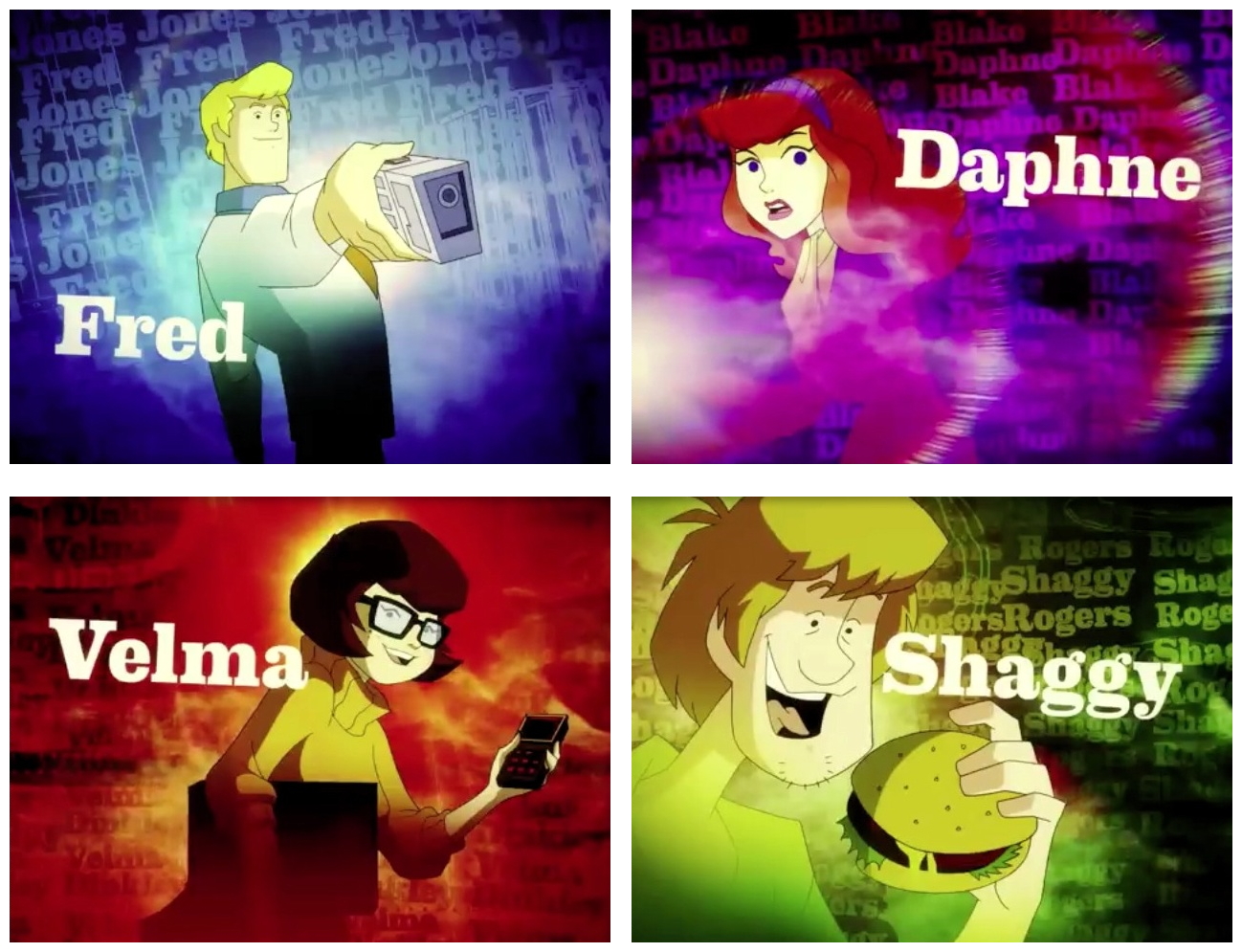