Hi Lucy, How are you?

Lucy- I am good, thank you.

How did you get involved with “The Blackcoat’s Daughter?”

Lucy- It was a script that came to my agent. I have never been a huge fan of the horror genre. It has always been something that I have kind of avoided at all cost because I scare so easily. This one, it was so exciting to read a horror film that was about so much more. Although it has all of the elements of a horror film and all the blood and guts. It is mostly about the human experience of loss and the grief and vulnerability that comes with that. So it is something that really interests me but also that everyone can relate to.

Why did you decide to take on the role?

Lucy- I have never done any kind of horror film. I did a self-tape and Skyped with the director Osgood Perkins and definitely after speaking with him and hearing the direction and the tone that he wanted to apply to the film and hearing the films that inspired him, I was immediately desperate to be signed on to be a part of the film.

Did you do anything special to prepare for Rose since you haven’t really gravitated towards horror films?

Lucy- I mean prefer to prepare for each role in a very different way. For Rose it was mostly me watching the films that Osgood Perkins recommended such as, “Rosemary’s Baby,” where she also deals with feelings of isolation and such. Like our film, it is much more about the human experience and grief. I watched films like that and films that influenced Osgood in order to get a real sense of where this script and character came from. We were really lucky with the place that we were filming. It was kind of middle of nowhere Canada in the dead of winter. The school that we were filming in was closing down a month after we wrapped so it felt very disconnected and deserted. Spending a lot of time alone in that environment really got me into the kind of head space that she is in.

What was it like working with Osgood Perkins and was it easier to work with him because he has acting experience?

Lucy- I think it makes such a huge difference when the director has acting experience as well because it just means that he not only has a view of the film as a whole and the intentions of the scene in terms of the audience he also has an actors instinct of how to communicate something to us. Rather than just giving us line-reading, he would give us the feeling of the scene and the feeling of the character. He would talk that through. It was such a wonderful experience. He was so emotionally connected to all of these characters. He gets that clarity and connection. It is so unique and so exciting.

You do an amazing job in “The Blackcoat’s Daughter.” Besides yourself you are working alongside a lot of great actors. Because of the intensity of some of the scenes did you guys do anything to keep it light on-set?

Lucy- The best thing that we did for this film was not spend so much time together which is usually the complete opposite of how you prepare. But it really worked because instead of getting to know, Kiernan Shipka (Kat) who is so sweet and light and charismatic, I only knew her as her character who is in a dark place. So that also added to the feeling of isolation.

What are you working on next? I am so excited about “Gypsy,” as well. Could you tell us a little about that?

Lucy- Well I am waiting for “Gypsy,” my Netflix series to come out, which goes on to Netflix on June 30th which is incredibly exciting. I just finished filming, “Murder on the Orient Express” in London and that is due to come out this year on November 22nd. Next I go Wales to film a movie called, “Apostle,” directed by Gareth Evans and it is about a cult and I play the cult leaders daughter.

Thank you! I hope you consider doing another horror film again?

Lucy- Absolutely! Anything that Osgood Perkins writes you can sign me up!

What do you want to say to the fans that will be watching, “The Blackcoat’s Daughter?”

Lucy- Just that I hope you enjoy it as much as we enjoyed making it. I hope it traumatizes you, as much as it did me!

The film is now on DirecTV and will be in theaters on March 31st. 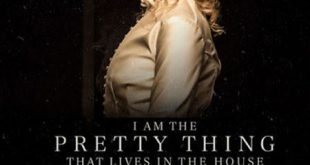