The Blu-ray premiere of cult B movie classic

Your Flesh Will Crawl Right Off Its Bones! 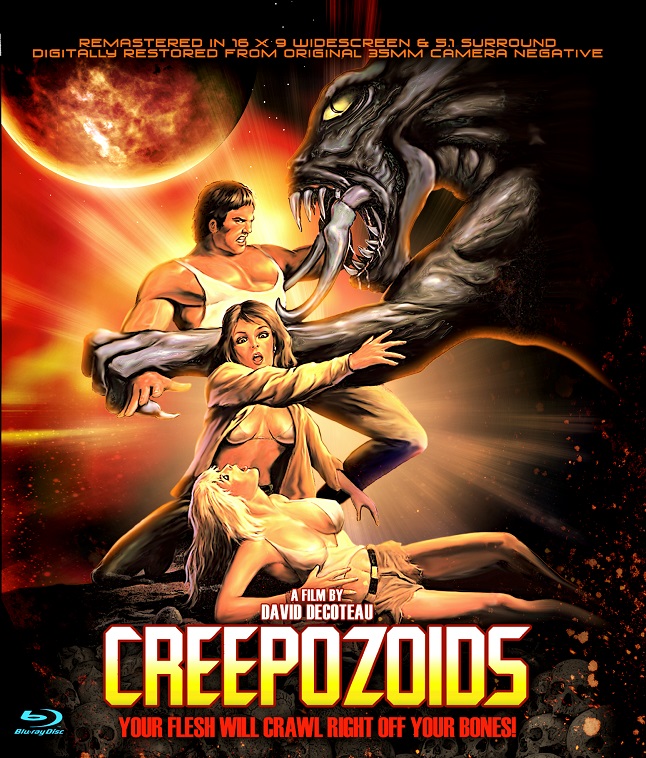 Blending key elements of genre hits MAD MAX and ALIEN (while also incorporating elements of Band’s PARASITE and METALSTORM) but produced on a tenth of their budgets, CREEPOZOIDS tells the tale of five Army deserters who wander the post-apocalyptic, post-industrial LA landscape seeking shelter from an increasingly toxic environment and poisonous rain. They end up in an abandoned laboratory where they explore, have sex and eventually run afoul of a cavalcade of genetically engineered creatures including mutant rats, a monstrous baby, a massive, bloodthirsty H.R. Giger-esque beast…and something even more malevolent.

Co-starring adult film superstar Ashlyn Gere – appearing here as Kim McKamy – and horror movie legend Linnea Quigley (RETURN OF THE LIVING DEAD, TROPHY HEADS), CREEPOZOIDS is a fun, weird and bloody trash classic and appears here for the first time on Blu-ray, remastered and restored from the original 35mm camera negative and armed with a new 5.1 surround sound mix. Your flesh will crawl right off its bones!

CREEPOZOIDS is available on Special Edition Blu-ray for the first time on April 11th. Special features include the original trailer and a vintage Videozone behind-the-scenes featurette.