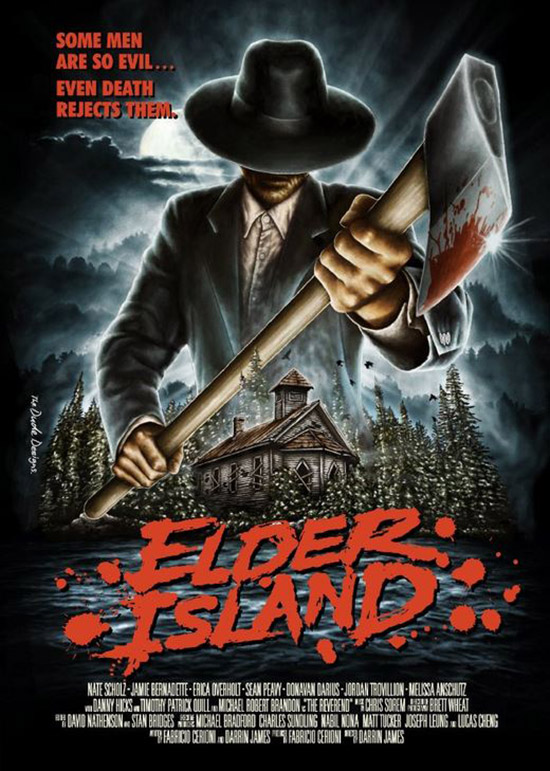 Based on the true events revolving around Beaver Island, Michigan, and King James Strang… Elder Island. 1856. Peter Wiggentstein turned to the men of the five island families around him and warned, “Tell nothing of this,” as the men all looked at the body of their former Reverend – gunned down just outside his own home – and a decision was made. They secretly buried the body on Graves Island, and the reign of America’s first and only king ended; but for every end, there is always a new beginning, for an evil was born that night. Five families have always controlled the Island. Five families share the Island’s fortune; five families share its curse.

I was taught by my parents to always find something nice to say.  Sometimes that’s hard to do.  The nicest thing I can say about “Elder Island” is that it passes the Bechdel Test.  I’m at a loss for another compliment.

“Elder Island” begins with a cold open of a young couple who’ve woken up in the woods.  They’re quickly dispatched by someone with an axe.  The film then cuts to the present, where we see three filmmakers who are coming to the island to make a documentary.  It seems people keep disappearing there, and it might make for a good movie.  It appears the entire population of the island is 5 people, yet somehow there is a hotel and a bar.  As soon as the trio checks in, they start noticing strange things around the island.  In the meantime, the locals are acting weird and a young couple from the island are starting to realize their parents hold a dark secret.

At the top of my notes, I have written “blah.”  That about sums this film up.  However, I wouldn’t be doing my job if I didn’t elaborate.  I’ll start off by saying I had to pause the film at least 4 times to give myself a break.  I’m very proud of myself for finishing it.

The first problem with the movie is its script.  There are too many characters and too much plot to untangle.  The characters have zero personality.  The only distinguishing characteristics about them are their hair styles.  I was so bored I gave them nicknames. There’s Sheriff Mutton Chops, Blondie, Brunette, Captain Stubble, and French Braid.  You’ll find it hard to care about any of them.  And the plot makes no sense.  Evidently, all the islanders are the descendants of people who killed a preacher and his family.  The preacher has come back from the dead to exact revenge.  For some reason, he’s killing visitors to the island instead of the locals.  It’s unclear what anyone’s motivations are.

The dialogue is another big problem.  The film does what I’ve noticed a lot of newer horror movies do.  It has the characters come right out and say what’s on their minds.  For any young filmmakers reading this: show it, don’t say it.  The script also has the characters saying genuinely stupid things.  For instance, the three documentarians are amused at the fact that the local bar is also a restaurant.  I must assume they don’t get out much.

The editing and camerawork are just as bad.  The director, Darrin James, should have invested in a Steadicam mount.  The camera bobs up and down for no good reason.  This might also be the worst edited slasher movie I’ve seen in a while.  There are several scenes, especially the first scene in the bar, that drag on forever.  And the third act doesn’t appear to have been completely edited.  There are sound issues and the film doesn’t resolve what happened to the heroes.

And then there’s the acting.  The only thing worse than bad acting in general is when bad actors are called upon to act drunk. This comes up more times than I can count. It’s pretty hard to watch.  All the performers seem like they’re trying not to wake the upstairs neighbors, and the actress playing the boom operator may have the worst scream in horror movie history.

The film also has some of the most poorly choreographed kills I’ve seen in a while.  They’re neither shocking nor entertaining.  I kept wishing I was watching “Hatchet,” a film that “Elder Island” is trying so hard to be.  Sadly, it’s not even in the same league.

“Elder Island” has no reason to exist.  It’s not scary, funny, or entertaining.  It’s a sloppy, incoherent mess.  My suggestion would be to watch “Hatchet” or any number of other, better films that “Elder Island” is ripping off.  Barring that, I recommend staring at a blank screen for an hour and a half.  It’ll be a better use of your time.