Ladies and gentlemen, start your engines! Frankenstein (Manu Bennett) is here to remind you of the “Rules of the Death Race” before you shift into Roger Corman’s Death Race 2050, now available on Blu-ray™, DVD, and Digital HD from Universal Pictures Home Entertainment.

MALCOLM MCDOWELL AND MANU BENNETT
RATCHET UP THE ACTION AND THE MAYHEM IN THE NO-HOLDS-BARRED MODERN REIMAGINATION OF THE CULT CLASSIC, DEATH RACE 2000 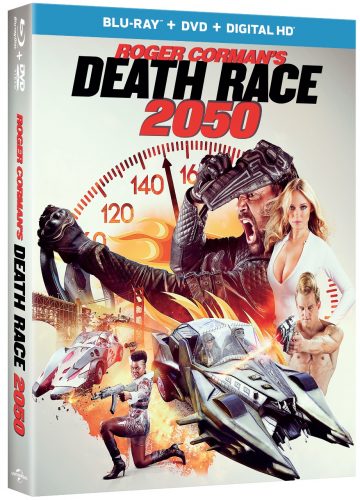 Legendary filmmaking icon, Roger Corman, is back with his most outrageous film yet in this sensational, action-packed and darkly humorous reboot of the original Death Race 2000! It’s the year 2050 and America is controlled by an all-powerful corporate government ruled by The Chairman (Malcolm McDowell). The masses have been brainwashed with violent virtual-reality entertainment. The event of the year is the Death Race, in which a motley crew of violent drivers compete in a cross-country road race, scoring points for shamelessly running people over and driving each other off the road. The reigning champion and fan favorite, Frankenstein (Manu Bennett), who’s half-man half-machine, wants to take the crown, but his rebel spy co-pilot threatens his legacy.

The Making of 2050 – This featurette goes behind the scenes of Roger Corman’s Death Race 2050 to explore why, over four decades later, the original Death Race 2000 has been remade, including what made this project appealing to cast and crew, what changes have been made, and what fans of the original will still love. Discover the movie magic behind the deaths, stunts and of course — the cars! Includes interviews with stars, director G.J. Echternkamp and Corman himself.
Cars! Cars! Cars! – Go on the set with the drivers of Death Race 2050 as they introduce their one-of-a-kind killing machines: Frankenstein and his Monster, Perfectus and his Piece of Art, Tammy and the Tank, Minerva and her Sound Box and ABE.
The Look of 2050 – An insider look at how the film’s visual style came together, including how shooting in Peru helped set the tone of the picture and how the costumes became stars in and of themselves.

The Blu-ray™ Combo Pack includes a Blu-ray™, DVD and Digital HD with UltraViolet™.

Blu-ray™ features a pristine high-definition picture, theater quality sound and extras.
DVD offers the flexibility and convenience of playing movies in more places, both at home and away.
DIGITAL HD with UltraViolet™ lets you watch movies anywhere, and plays on your mobile devices.