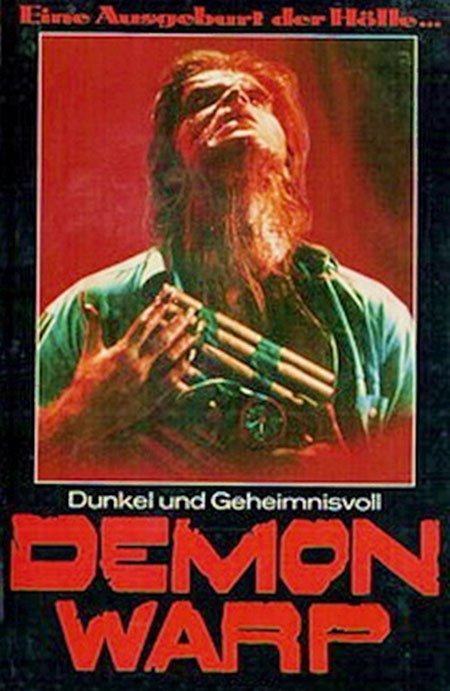 A young man brings four friends to a remote cabin for an idyllic weekend. But the trip is a ruse; secretly he’s come to track down a mysterious Bigfoot like creature he blames for his uncle’s disappearance. His suspicions were correct and within hours the group is fighting for their lives against the murderous beast.

1988 was a good year for direct-to-video features. The overseas and domestic video markets were booming, creating an insatiable market for low budget action adventure, kickboxing and horror films. Producers with a fading name star attached could saunter into Santa Monica’s annual “American Film Market”, have lunch with some overseas buyers and be home in time for dinner with stacks of signed documents called Minimum Guarantees. Those movie biz documents combined with a Completion Bond could be banked to finance the film’s budget. Successful distributor Videmark (who later became Trimark) decided to try their hand at producing in-house features to capitalize on the raging bull market. 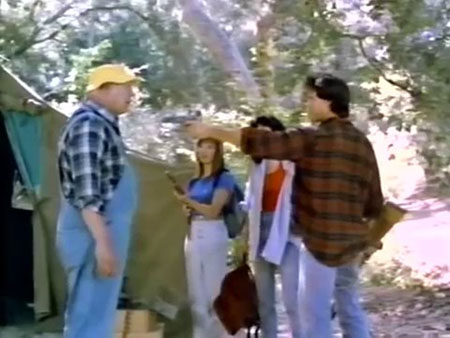 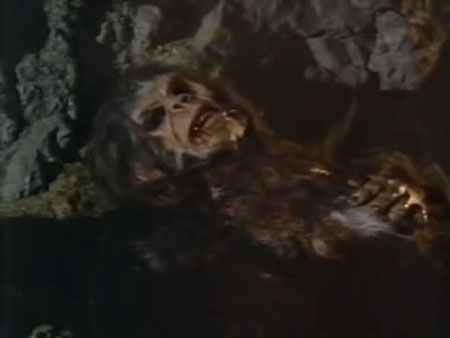 One of their earliest efforts, Demonwarp started off with great promise. Special effects makeup maestro John Carl Buechler (Troll, Cellar Dweller) was slated to write and direct, with Jack Palance coming aboard as his name star. Unfortunately, there were delays and things started to get wobbly. Buechler left to helm the bigger budget Friday the Thirteenth VII: The New Blood. With Buechler gone, Jack Palance jumped ship and it looked like Demonwarp would never see the light of a cathode ray tube. But a pair of advertising copywriters stepped in and revamped the script to make it financially manageable. Then the producers persuaded George Kennedy to sign on for a whopping three days with the caveat that his daughter Shannon Kennedy be cast in one of the roles. And so, for better or worse, Demonwarp went into production.

There’s the skeleton of something pretty cool in Demonwarp, mostly due to Buechler’s “everything but the kitchen sink” story concept, tossing Bigfoot, aliens, zombies and an evil wizard into the blender, along with generous helpings of nudity and gore. Some entertainingly off kilter stuff managed to survive despite the neutering script revisions and Emmett Alston’s pedestrian direction.

To recap the plot, Jack Bergman (David Michael O’Neill) cons four friends into visiting his uncle’s remote cabin with the promise of alcohol fueled fun and sexual hijinks.  But it’s all a charade. In truth, he’s dragged them to the boondocks to help track down the hairy beast that dragged off his uncle and brutally murdered another woman in that very same cabin. In short, he’s brought his buddies along as live bait. That’s the equivalent of promising your pals a sun-drenched vacation and then shanghaiing them off to Afghanistan. 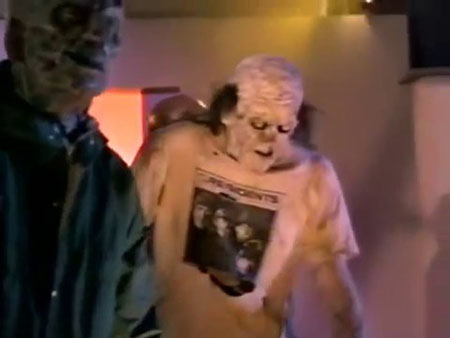 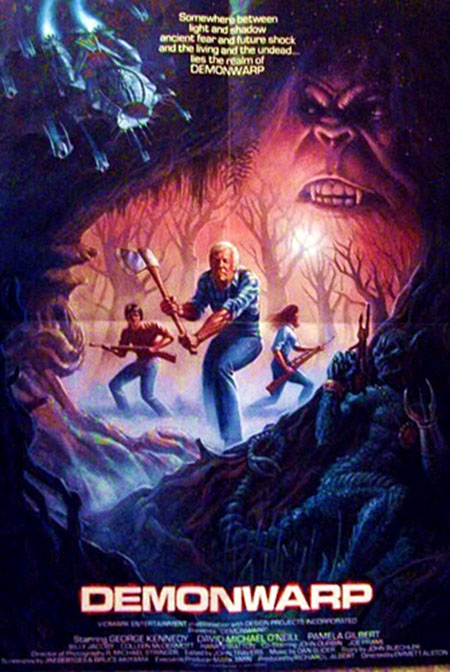 Upon arriving they meet Bill Crafton (George Kennedy) who isn’t the hairy murderous beast. He’s a righteous guy intent on tracking down the Bigfoot monster that dragged off his daughter in the opening scene. By the way, Kennedy’s real life daughter Shannon Kennedy does NOT play his onscreen daughter. You’d think monster hunter Jack would want to team up with this man who shares his vengeful mission and has valuable hands-on experience with the murderous beast. Nope, instead Jack runs him off like a homeless guy who’s wandered into a family picnic. Stick around because Jack only gets dumber.

Night falls and we endure a torturously long dinner table scene, thankfully followed by some gratuitous nudity from Carrie (Pamela Gilbert) and Cindy (Colleen McDermott). Then the beast attacks, killing comic relief Tom (Billy Jayne) and practical joker Fred (Hank Stratton). After barely surviving the attack, Jack and the girls discover the beast has destroyed their car, marooning them. For a few fleeting moments we think this could become a cool monster/siege movie à la Legend of Boggy Creek, but those hopes wither with the morning sun.

At sunrise, the three survivors head out on foot to find a fire-road that will lead them to civilization—never explaining why the actual road-road they drove in on isn’t a more viable option.

There’s a lot of time spent wandering around Hollywood’s Topanga Canyon, allowing for some in depth character development. Actually, we just discover that Jack is a petulant man-child who calls the grief stricken Carrie a “dumb bitch”. Jack is written like Ash Williams’ misogynistic, pinheaded cousin. 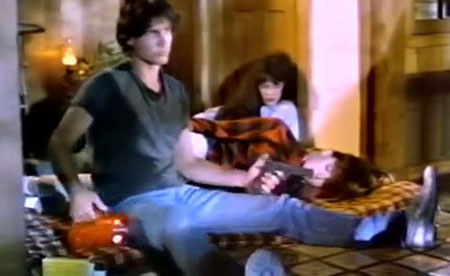 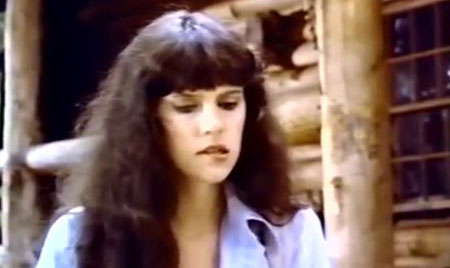 Thankfully, the story shifts to a pair of unrelated hotties in search of a hidden marijuana field. When they discover the field’s been picked clean, Betsy, played by the gorgeous and underrated Michelle Bauer, turns to her friend Tara and announces, “There’s no point having tan lines,” and pops her top off. Moments later, the two are basking in the sun but, despite the buildup, Tara retains her bikini top. Why the bait and switch? You guessed it—Tara is played by George’s daughter Shannon Kennedy! Apparently nepotism doesn’t include doing nude scenes.

There are more Bigfoot attacks and some running around followed by lethargic wandering around. But hang in there because just when you start to lose all hope Demonwarp inexplicably adds zombies, aliens, more gore and some supernatural mumbo jumbo. It’s so loopy you almost expect Santo and Blue Demon to bounce in and tag team some zombie/alien/Bigfoot butt.

And that is why I’m not completely dismissing Demonwarp. In its own blockheaded way it delivers a complete checklist of what a direct-to-video B-monster movie should have. Buechler’s Bigfoot monster costume looks cool, despite being shot in the glaring noonday sun. Some of the zombies are neat while the others look like they wandered off the set of Ray Dennis Steckler’s Incredibly Strange Creatures (yada yada) Zombies.

The lead alien is endearingly disgusting, though I suspect the costume was repurposed from one of Buechler’s earlier Charles Band movies. Our hero Jack is allowed to be a complete jackass when any rational screenwriter would have ruined it by giving him some admirable trait. Every actress who isn’t named Kennedy goes topless in scenes that define gratuitous. Michelle Bauer proves to be a super trouper, given that virtually her entire screen time is spent in only a pair of panties. It becomes hilariously obvious that the cast is just wandering around a fifty-yard circle in Topanga Canyon. And we even get the ultimate B-minus movie touch when a bored crewmember is seen loitering in the background of Bronson Cave.  With all that good stuff it’s easy to forgive the movie’s stillborn second act. Just bring some alcohol to get through the slow sections and you’ll have a good time.

Some of the cast went on to solid careers, and the final one is particularly near and dear to this reviewer. Billy Jayne who played Tom, the annoying wise-ass became a regular on the sitcom Parker Lewis Can’t Lose, playing an annoying wise ass. Hank Stratton has become one of those actors you see on virtually every dramatic television series. Michelle Bauer (Hollywood Chainsaw Hookers) joined the ranks of B-Movie scream queens, an honor that brought her fame but not much fortune. That’s unfortunate because she possessed an onscreen charisma that stole any scene she appeared in, clothed or unclothed. She’s living happily in Arizona, mountain biking and playing insanely attractive moms in local commercials. And best of all there’s Colleen McDermott who was one of the leads in the first feature film I ever produced- 1997’s The Night That Never Happened. She’s still talented, gorgeous and delivering the dramatic goods on a lot of episodic television. 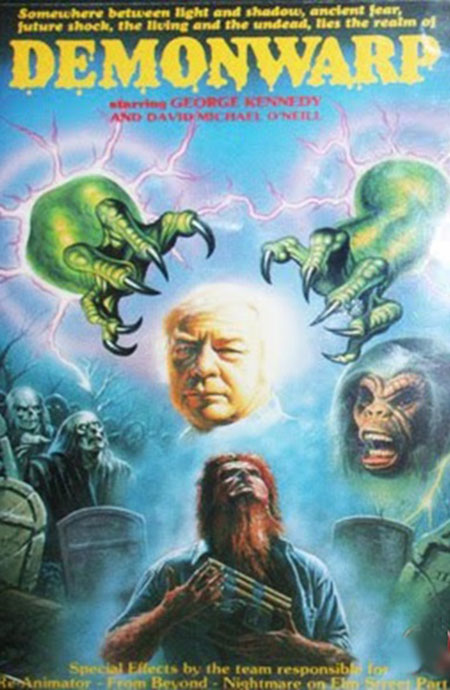 Makeup effects wiz and occasional director John Carl Buechler never achieved the fan following of a Tom Savini, but he created a tremendous body of memorable screen monstrosities. Sadly, his directorial career faltered when the MPAA slashed away at his Friday the Thirteenth entry until it was a hollow shell of its gruesome self. You have to wonder what Demonwarp would have been like if he’d stayed on as director. It probably would have been a lot more fun and even more shameless.

The other star of Demonwarp is the majestic Bronson Cave, which in truth is only a short tunnel in Griffith Park. Despite its diminutive size, this manmade Los Angeles landmark has starred in hundreds of films, television shows and movie serials. It was the original movie serial bat cave, and went on to repeat that role for the television series. If you’ve seen a rubber suited monster stalking through a shadowy cavern you can bet you’re looking at Bronson Cave.

George Kennedy was pretty good too.

So I suggest you switch off your brain, damage your liver and get warped.