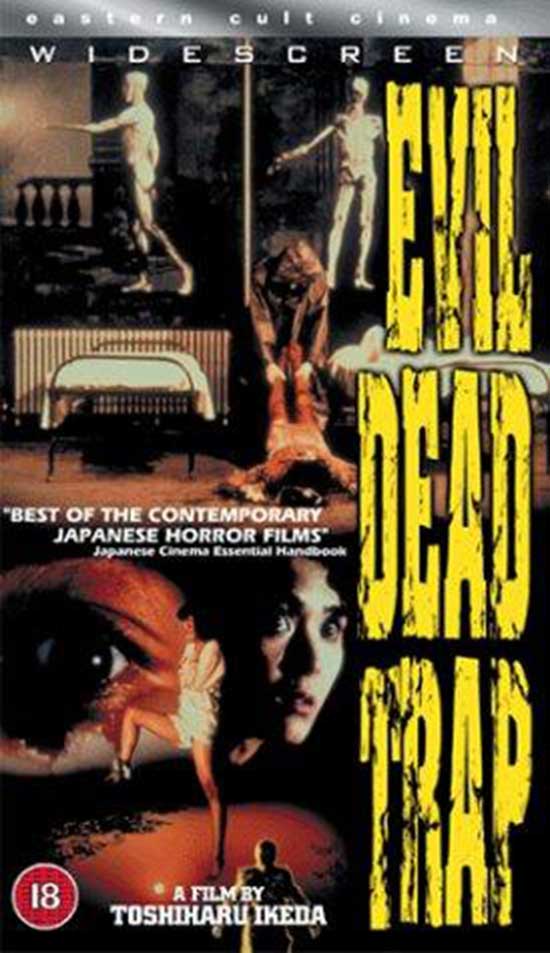 A TV station employee takes a camera crew out to an abandoned factory to investigate a purported snuff film that was made there, only to end up running for her life when a small, fetus-like creature murders her crew.

Evil Dead Trap is a film perhaps best known to most horror fans because of its name. The rather poorly constructed English title seems to hint at a connection towards Sam Raimi’s 1981 classic The Evil Dead, conjuring up images of demonic horror and slapstick humour. In reality the pair have nothing in common except for two words in the film’s title and this late 80’s horror offering from the director Toshiharu Ikeda is firmly on the slasher side of horror, rather than the comedic supernatural. Nevertheless, it’s a film worth noting and a great representative of its respective genre. 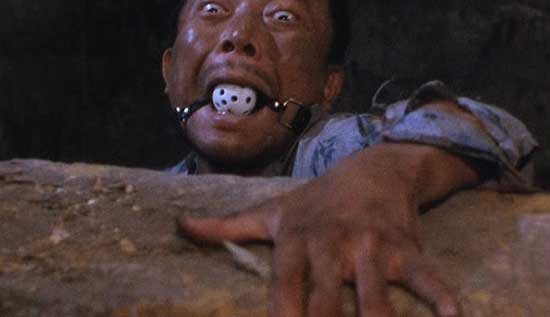 TV show hostess Nami Tsuchiya (Miyuki Ono) presents a show called “Late Night with Nami” that invited its viewers to send in their own home videos. Naturally, this kind format attracts its fair share or weirdos, but when Nami receives a video depicting a journey to an abandoned warehouse and young woman being tortured to death, her reporters hunch tells her to investigate further. Despite the resistance from her boss, Nami gathers a crew to accompany her to the location seen on the tape in hopes of finding some answers about the video’s origins. 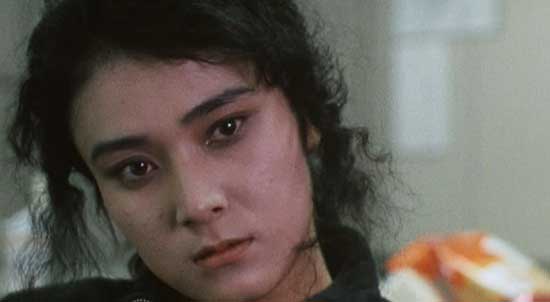 With this rather classic slasher set-up put to place, things get going with no delay. Nami and her colleagues have not been at the location for no more than couple of hours (tops), when the first of them falls victim to an unseen killer and it doesn’t take very long for the rest of them to follow suit. In all fairness, they are not the most professional  group of journalists, stopping to have sex in middle of the job and generally just wandering around aimlessly even though they are on the clock, so it’s no surprise that they fail to save themselves or their friends. I mean, they do not even seem to notice that one of the group members is missing until her blood-soaked body is quite literally dragged right in front of them, and after they just kind of scatter around like scared children with no hope for anyone.  In the end, only Nami is left to fend for herself and figure out just what the heck is going on around her. 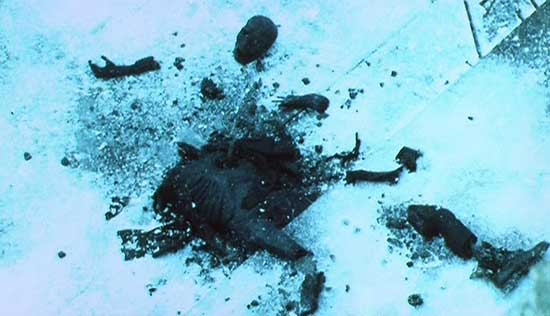 It’s of course this kind of slightly illogical silliness that good slashers are made of, and Evil Dead Trap is indeed a good one. I was in all honesty waiting for something even more absurd and even though the ending definitely takes the film into some bizarre territory, it was not quite the off-the-wall weirdness I was expecting. Still, I was not left disappointed. In fact, I was quite taken back by how well crafted Evil Dead Trap was. Now, don’t get me wrong, it’s not a story with deep meaning and complex layers, but it is a very decent representative of its genre and manages to tick all the boxes that a good slasher should: (as discussed above) stupid people making stupid decisions,  a masked killer that seems to have superhuman abilities to get to his victims and gruesome death scenes with copious amounts of blood . There’s even a freaky supernatural element; something very synonymous with sleazy 80’s horror. 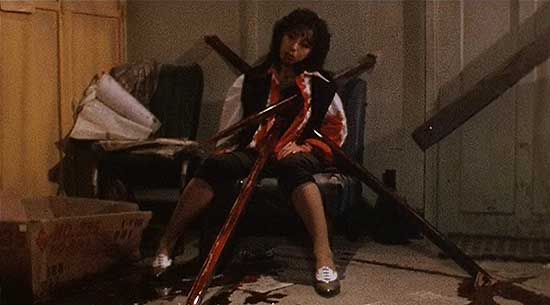 What also amazed me was how stylised the film was. While it’s not a triumph of cinematography by any means, there’s plenty of very well thought out shots that took me by surprise and I would argue that works of Italian masters such as Argento and Fulci have certainly been an influence here. Everything from the colour scheme of vivid blues and oranges, to the close ups of eyes being poked out with a knife, not to mention the ongoing mother issues and childhood trauma that our murderous villain is suffering from, all just scream giallo. On the other hand, I can also see hints of Japanese cyberpunk dotted here and there and the segments with a hectic first-person camera going through spaces with lightning speed are undeniably reminiscent of early days of cyberpunk cinema. These two might sound like a bizarre mix, but somehow Ikeda has managed to bring them together in one gory yet stylish package. 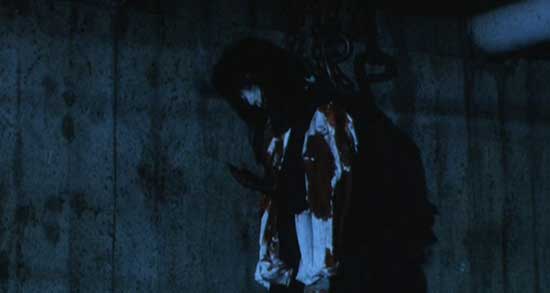 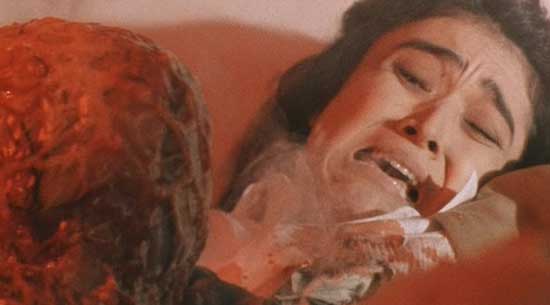 The special effects are for the most part very well done, and the kill scenes can proudly hold their own amongst any other genre classics. Where the film falls apart slightly is its last half an hour and the endless parade or false endings. Yes, the false endings are a regular occurrence in slasher cinema, but one or two per film is surely enough. Evil Dead Trap’s regrettable attempt to squeeze a biggest possible amount of suspense into the last 30 minutes unfortunately makes it less tense, and more tedious viewing. Also, even though I am a dedicated fan of supernatural horror and am usually always positively surprised when such elements are introduced to a slasher film, I am not entirely convinced that was necessary here. Maybe if the rather weird body horror aspects would have been hinted at a bit earlier in the film, they could have worked a little better, but as it stands the whole thing just feels like an after though and not in any shape a necessary add to the story. 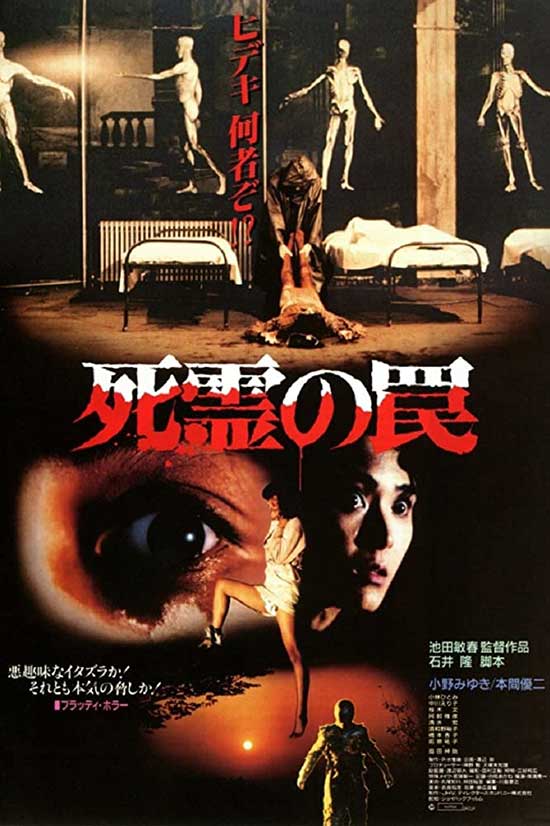 These tiny little niggle to one side, I thoroughly enjoyed Evil Dead Trap. If you’re looking for a classic 80’s slasher but are bored of all the old classics, here’s a great alternative. It’s bloody, gruesome, a little bit weird and maybe most important of all, a lot of fun.