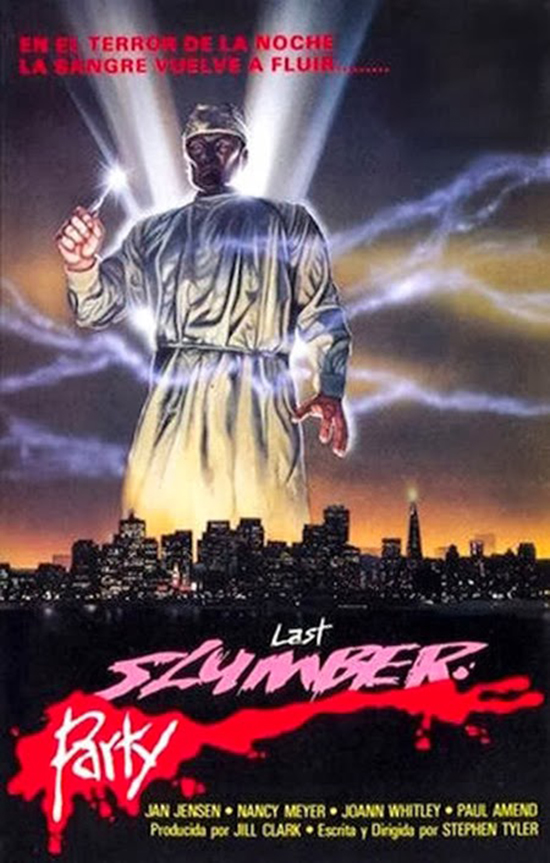 An escaped mental patient crashes a slumber party being held by three high school girls (who all look like they are in their late 20’s) and before you know it the bodies are piling up. Will any of them survive or will this indeed be their last slumber party (see what I did there)?

Slumber parties never ended well for anyone in the 80’s did they? If the people that attended them weren’t brutally slaughtered by a maniac brandishing a drill (or a singing maniac who thought he was Elvis brandishing a drill) then they were destined to end up in a mental hospital themselves thanks to the experience. Unfortunately the high school girls back in the day didn’t seem to realize that having a slumber party was a bad idea and as such they kept having them no matter how many people had to die in the process.  I’ve always dug these types of movies personally and love all of the Slumber Party Massacre  films even if they are pretty much just the same movie over and over again (hey, why mess with a formula that works, right?).

My parents and I rented The Last Slumber Party on VHS back in the fall of 1989 thinking that it was actually a part of the Slumber Party Massacre series (which I am sure a lot of people did back in the day that didn’t know any better) and even though Mom and Dad didn’t care for it I thought it was pretty cool. I watched it again recently and while it may be a lot cornier than I remembered it when I first saw it as a sophomore in high school I still enjoyed it for what it was and thought that it was a sweet little movie in its own weird way. 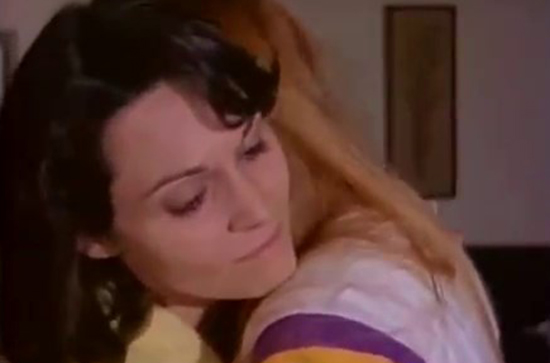 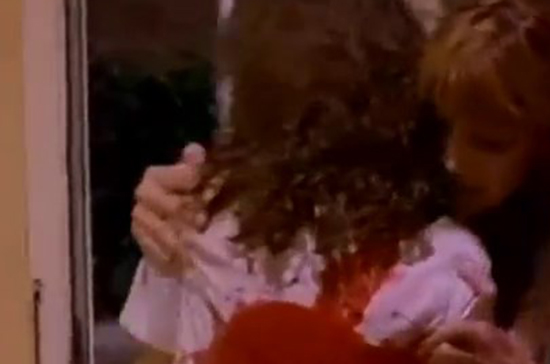 The premise is cookie cutter as hell but that’s okay because it’s fun. In a nutshell a trio of horny high school girls decides to have a slumber party to celebrate the end of the school year. Of course they plan on getting drunk, staying up late, eating pizza, watching a horror film, and messing around with a group of equally horny male high school students that they know (you know, the typical stuff that takes place at these slumber parties).  Unfortunately for them, a dangerous psychopath from the local booby hatch escapes right before he is to be lobotomized, kills a doctor, steals his clothes to disguise himself, and decides to crash the slumber party for a little bloody fun. Yeah, I know, I know, it sounds like a ton of other 80’s slasher flicks but that’s okay because it works. It’s one of those movies that you watch when you don’t want a complex plot that makes you think and you just want to watch a film where stupid people do stupid things and get slaughtered by the killer as a result. If you enjoy these types of movies then without a doubt you will get a kick out of The Last Slumber Party.  It is just your basic slasher flick that doesn’t try too hard to “go there,” and while some viewers may look down their noses at it for being too simplistic I for one loved it despite that it isn’t perfect. 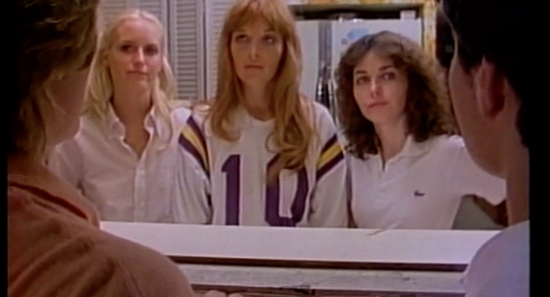 In addition to loving it just because it is your basic 80’s slasher flick that featured some psycho running around taking out high school kids (who look a lot older than they should be) I also dug the fact that they did try to do something a little different by adding a second killer at one point. You see, the movie has your stereotypical male nerd character that goes to school with our “heroes” that is picked on unmercifully by the male students. He finally decides that he has had enough and makes the choice to do something about it by crashing the slumber party as well and taking out his tormentors (while wearing the same outfit as the actual killer, coincidentally enough). While he doesn’t last too long and becomes a victim to the main antagonist of the film I thought that it was kind of a cool touch to have this character be a part of everything because it showed that the people behind it were at least trying something a little bit different in a way. I guess director/co-writer Stephen Tyler (not to be confused with Aerosmith’s Steven Tyler, but how cool would that have been if he had been the guy behind this?) thought throwing this character into the mix was a good idea and I have to agree because I think it works despite the fact that he doesn’t really get much revenge on the people that pick on him (other than taking out one guy that looks a little like Jason Hervey from The Wonder Years at one point but that is about it). 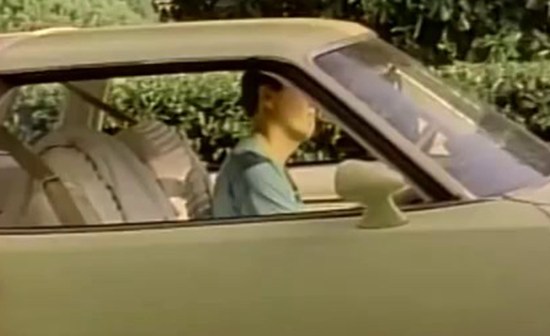 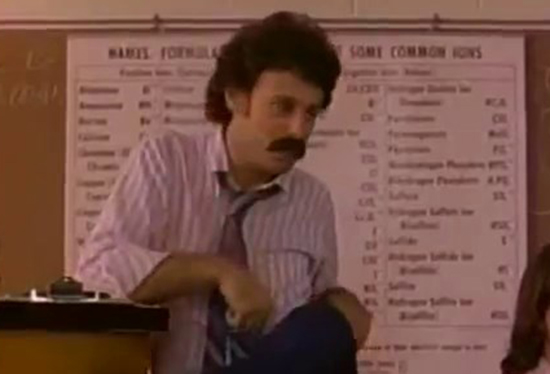 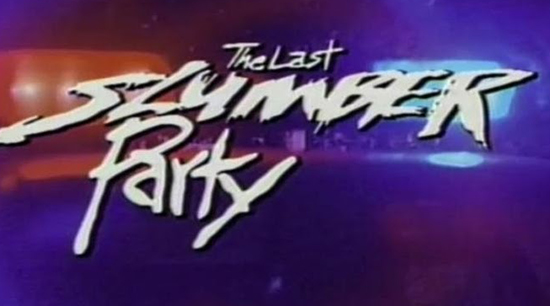 Of course the movie has a lot of flaws but that’s okay because I was able to overlook them. The acting is bad, the special effects aren’t that special, and the way the killer takes out his victims leaves a lot to be desired (he basically just slits people’s throats with a scalpel and isn’t the most creative homicidal maniac out there). The characters are a little stupider than usual and do some unbelievably dumb things considering the fact that they have seen some of their friends’ dead bodies and are well aware that there is a homicidal maniac stalking them, the weird nightmare scene doesn’t really fit in anywhere, and the camerawork is pretty terrible (there are several times we see stuff off camera that we shouldn’t see because the person operating the camera wasn’t quite sure of what he/she was doing) but it doesn’t really matter in the because as I’ve said time and time before about other films, I love this type of stuff and think that it actually makes the movie better in a way. 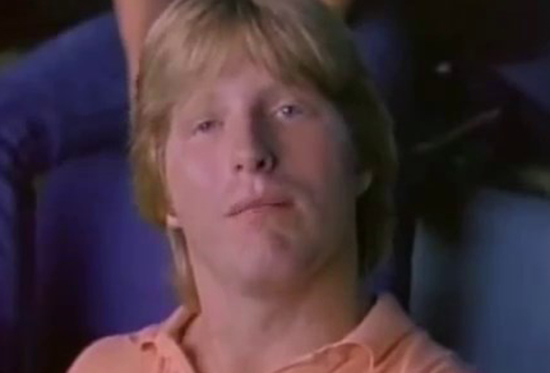 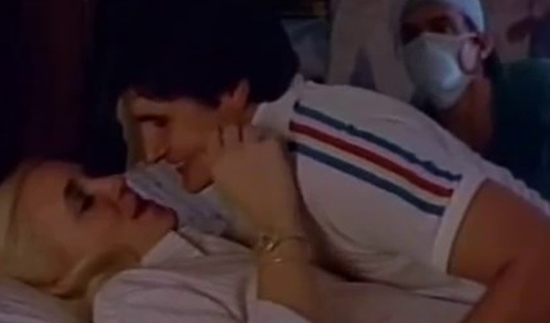 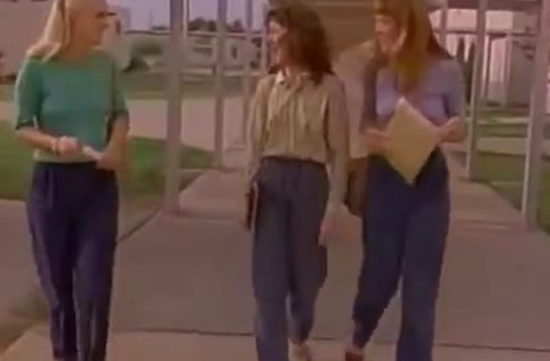 While most people may not agree with me I have to say that The Last Slumber Party is an enjoyable little movie. Is it a good movie? No, not at all. Is it a fun movie? You bet. Is it so bad that it’s good? You got it. Much like Blood Cult (which I also reviewed recently) this is one of those movies that you watch with a group of friends who enjoy bad movies with a case of beer and several pizzas one night when nothing else is going on.  While it may never be called a classic horror film I still dug it and think that a lot of other viewers out there will too if they give it a chance and just enjoy it for what it is. Check it out when you get a chance; just don’t expect it to change your life or anything.