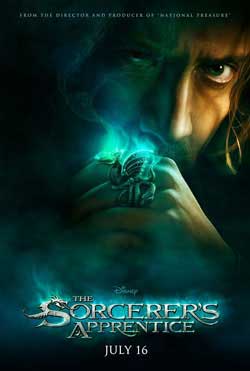 Here I am again my little acolytes with the lowdown on “The Sorcerer’s Apprentice”. The latest film from the seemingly tied at the waist team of director Jon Turtletaub & Nicholas Cage. It seems that Nick’s only hit films over the last few years were directed by Turtletaub & he figured “if it ain’t broken, why fix it”?

Cage plays Balthazar Blake who was an apprentice to Merlin hundreds of years ago. Merlin had 3 apprentices: Balthazar, Maxim Horvath & Veronica. Maxim is played by Alfred Molina who I have never seen give a bad performance, even in bad movies. Veronica is played by the (Still) beautiful Monica Belluci. I threw still in there because while she is a gorgeous woman she is getting older & it shows in this movie a bit. I compare her to Sophia Loren in a sense because while Sophia was a knockout in her day, she isn’t anymore in my opinion but people still refer to her as “Gorgeous”. She isn’t. I think that’s where Monica is heading. But for now she still has the goods. 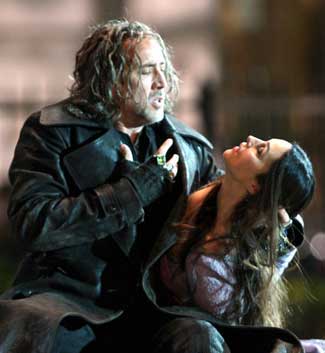 Back to the flick, Merlin was tricked & murdered by Horvath & the evil Morgana Lafey who is played by Alice Krige. Morgana has made a deal with Horvath to share the power they steal from Merlin once they procure a very powerful ring that he has in his possession. Balthazar & Veronica get to Merlin just as he’s being ambushed & Veronica makes the ultimate sacrifice & essentially sucks Morgana’s lifeforce into her own being & has Balthazar place them in a doll. You’ve seen those Russian dolls that have smaller dolls inside of them right? That’s the doll veronica gets placed into. Balthazar & Horvath battle over the ring & Balthazar manages to put Horvath into the same doll Veronica is in. In the next layer of the doll. Merlin’s last gesture to Balthazar is giving him the ring (which is in the form of a dragon) & tells him to guard the dolls until he can find an apprentice to pass his knowledge to.

Hundreds of years go by & Balthazar has traveled the world several times over to find the one. The one who will be his apprentice. He does not know who the apprentice will be though. The ring will know when it is placed on the right person’s finger. Cut to the year 2000. A class is on a field trip to the Statue Of Liberty & a young boy named Dave (Played by Jay Baruchel in a winning performance) is about to find out if a girl he has a crush on is going to accept his offer of being his girlfriend on one of those little “Yes or no” notes kids write to each other when a great wind suddenly blows the note out of his hands before he can read her response. He immediately breaks away from the class & follows the note to a shop where the note slips thru the mail slot on the door. This shop is owned by Balthazar & as Dave walks in looking for the note he inadvertently knocks stuff over which alerts Balthazar to his presence. As the boy tries to explain why he’s in the shop he notices the ring & comments on how cool it looks. Balthazar figuring that Dave might have been brought to him for a reason asks him to try it on. The ring instantly comes to life & the dragon curls around little Dave’s finger perfectly. Realizing that he has found the one who he has been searching for for centuries Balthazar asks him to wait while he runs downstairs to fetch a book of spells. In the interim Dave notices the doll that houses Horvath, Morgana & Veronica among others. Balthazar has been capturing evil wizards all the while & placing them in another layer of the doll making it much bigger than it was in the beginning. 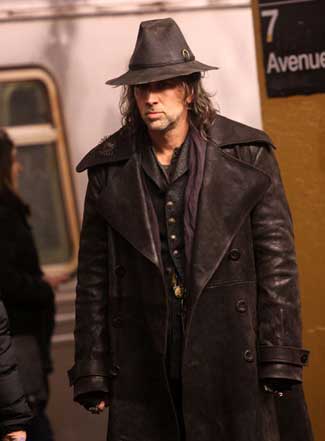 Of course Dave knocks the doll over & out comes Horvath. Molina has a great aura of snobbery about him as he asks “What year is it”? to Dave. He then notices the ring on Dave’s finger & as he approaches Dave, Balthazar returns & the fireworks start flying. A great battle between 2 wizards takes place in front of Dave’s eyes. Dave runs from the store to find his teacher & classmates looking for him & he tells them of what he’s seen but all he gets is berated by the teacher for breaking away from the group. He manages to get her into the shop but no one is there…..

Cut to 10 yrs. later & Dave is your average everyday nerd in college who is working on Ways to harness fusion energy. He’s still a klutz, has no girlfriend & still has possession of the ring. He doesn’t wear it though. He just keeps it in a little cubby. Long story shortened a bit: Balthazar finds Dave, Horvath finds Dave, Balthazar pleads with Dave to put on the ring & fulfill his destiny, Horvath wants to kill Dave & get the ring which will release Morgana & then conquer the Earth. At this point I looked at my watch. Not because the film was boring mind you but it seemed longer than it needed to be. This to me is a bad sign. If you’re enjoying the film (& I was) but you still think it’s running long then there is a problem. 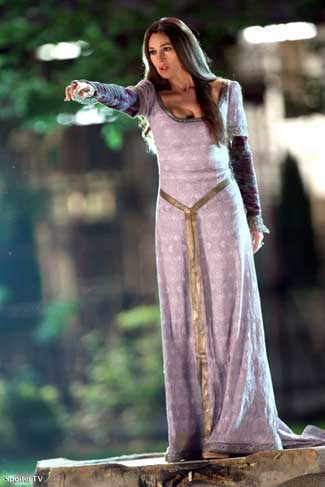 Dave accepts Balthazar’s offer of learning how to become a wizard & harness all the power the ring has to offer. But they need to find someplace where Horvath can’t find them for awhile. Conveniently, Dave has a abandoned Transit hub that the city allows him to use for his Plasma experiments. It looks a lot like Frankenstein’s lab & shows off some pretty cool production design. There the 2 of them begin the lessons that will teach Dave to become the Sorcerer he was meant to be. Did you know that a sorcerer’s main weapon is a Plasma ball? Funny that Dave is experimenting with Plasma as well huh? This part of the script was just too convenient for me to swallow & showed laziness on the screenwriters (Lawrence Konner & Mark Rosenthal). Although they did add a great sequence straight out of “Fantasia” where Dave tries to get his getaway cleaned up & decides to use some of the sorcery he’s learned to do it. It’s a well choreographed cgi/puppetry sequence that is good for a few chuckles. 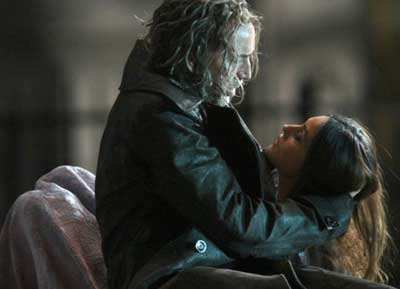 One thing leads to another & amongst all the shenanigans Dave finds his childhood sweetheart Becky (Teresa Palmer) & she gets mixed up in the plot (I found it odd that she bought Dave’s story with very little pleading from him). The story gets a little lazy at points. I think some prudent editing would’ve helped tighten the story up a bit. There are some major plot holes that escaped the filmmakers notice & they were fairly obvious to me & everyone around me but that could be just me nit-picking. But f*ck it, if you spend millions of dollars on these movies there shouldn’t be continuity errors in them either. 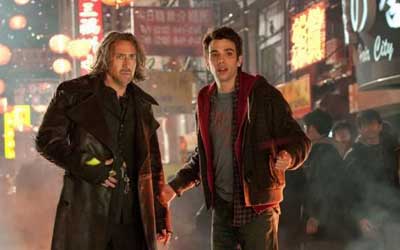 It all ends on Wall street where Morgana gets released along with Veronica & then we get the big special effects light show which while it is impressive looking isn’t anything you haven’t seen before. Dave finally embraces his inner Sorceror & defeats Morgana while Balthazar manages to get Horvath. I should mention that Horvath has a flunky to assist him. A very funny Criss Angel type played by Toby Kebbell who knows of what Hoevath is talking about from the very beginning & is a hoot as he feels like his life is one big stage show & he really adds some humor to the role while he’s in the movie. 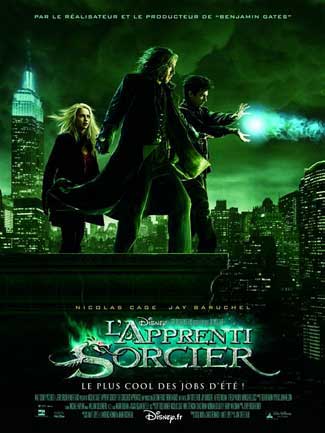 In the end Morgana & Horvath are defeated, But you knew that from the beginning of the movie. And that’s probably the film’s biggest flaw. It’s well acted with good special effects (A giant dragon chasing Dave through Chinatown is a standout) but the script is lazily written & very predictable. I guess the kids will like it (My little terror did) & I thought it was a fairly painless nearly 2 hours to suffer through although that is another problem, 20 minutes could have been easily excised from this movie & it wouldn’t have suffered at all. But it is what it is. 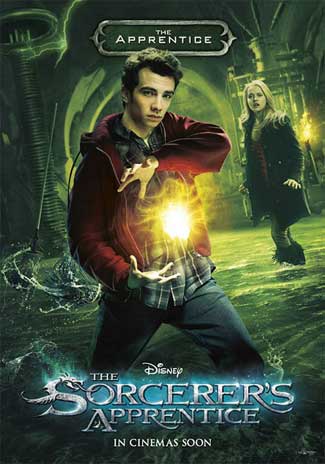 The Saint scores this one 2 1/2 Shrouds. It’s relatively enjoyable & the actors seem to be having a great time hamming it up, so if you’re in the mood for a little harmless sorcery action (I like my sorcery to cause some harm thank you) then you could do a lot worse than “The Sorcerer’s Apprentice. As for me..I’m back to my Mausoleum to bone up on some of my sorcery..you never know when you might need it. So remember kiddies…Take your vitamins, root for the New York Mets & say your prayers every night before you go to bed. And don’t forget ..I’ll be listening, so be sure that you’re PRAYING TO ME!! 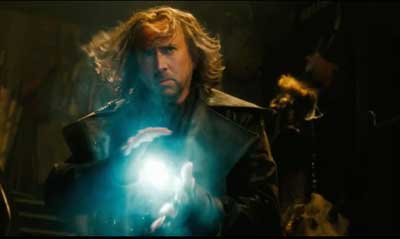 “By the way if you hang around until the credits are done rolling, there is a little extra afterwards that possibly threatens us with a sequel but looking at it’s first weekend’s grosses I doubt that’ll happen.