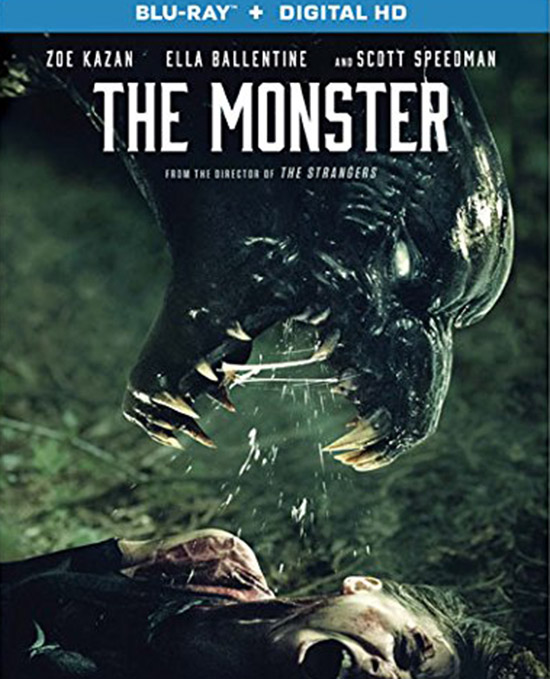 A mother and daughter must confront a terrifying monster when they break down on a deserted road.

I have a friend, let’s call him Sal.  Sal is a natural born screwup.  He’s always behind on his bills, he can’t keep a girlfriend, he’s had five jobs in the last year.  He drinks too much.  He has no social graces.  He’s always trying to borrow money.  Being Sal’s friend is a headache.  I’m sure you know a Sal of your own.  But here’s the thing, as much trouble as he is, you know you can count on him in a crisis.  You’re broke down on the side of the road at midnight?  Sal’s on his way.  You’re hurt and you need someone to take you to the hospital?  He’s got your back.  Of course, as soon as the crisis is over, he goes back to being a screwup.  Now, imagine that Sal isn’t your buddy, he’s your dad.

“The Monster” is a well acted and suspenseful piece of work.  The film starts with a young girl named Lizzy, played by Ella Ballentine.  Lizzy is cleaning up after her alcoholic mother Kathy, played by the incomparable Zoe Kazan.  Like many children in an abusive, dysfunctional home, she is the real grown-up.  We learn that Lizzy and her mom are going on a road trip.  It becomes obvious fairly quickly that they’re taking Lizzy to her Dad’s.  Both expect this to be a one-way trip for Lizzy.  After seeing the relationship that Lizzy and her mom have, you won’t blame the kid for wanting out.  Several times she tells Kathy she hates her.  We see nothing to contradict that feeling.

As the trip goes on, the sun sets and it begins to rain.  Seeing an animal in the middle of the road, Kathy swerves to miss it.  Stranded in the middle of nowhere with a broken down car, they wait for help to arrive.  However, there is a monster in the darkness, both literal and metaphorical, watching them.

“The Monster” is able to do a lot with very little.  Except for some flashbacks, the film takes place almost entirely on that lonesome country road.  It’s tense and claustrophobic, even before you understand the threat.  If all the filmmakers had wanted to do was make an effective suspense movie, that would have been enough.  However, director Bryan Bertino has higher ambitions, and for the most part the movie lives up to them. Indeed, “The Monster” is a huge improvement over Mr. Bertino’s debut “The Strangers.”  A film I found uneven and disappointing. 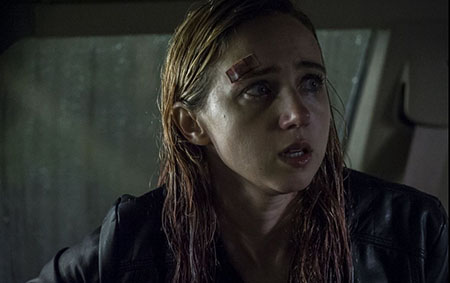 Any movie like this, especially one that features a child actor, lives or dies on the performances.  Rest assured that the entire cast is exceptional.  That should be no surprise to anyone who has seen some of Ms. Kazan’s previous roles, most notably “Ruby Sparks.”  I’ve seen her play a meek pioneer woman, manic-pixie dream girl, and now an abusive mother trying to redeem herself.  Where is this woman’s Oscar?  But the real standout is young Ms. Ballentine.  Like Hailee Steinfeld in “True Grit,” she carries the movie. 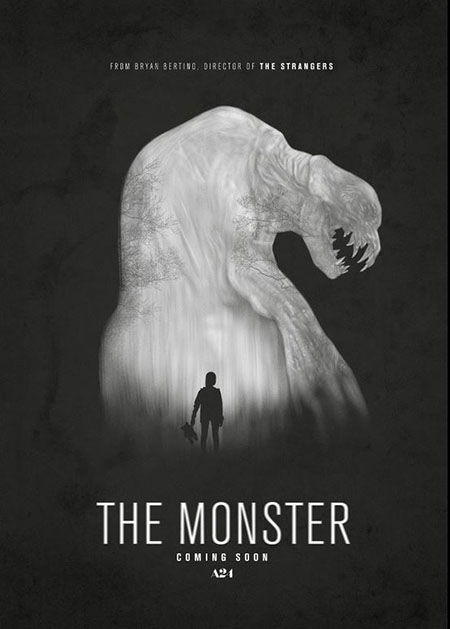 The film also has excellent cinematography.  The night shots are unnerving, but still well-lit enough to see the action.  One might think that’s no big deal, but for a low-budget film that’s very impressive.  The special effects are also very well done.  They appear to be mostly practical effects, which I always like, and the creature reminds me of the aliens in “Attack the Block.”

But perhaps the film’s greatest accomplishment is how it presents a believable relationship between a wise beyond her years child, and her failure of a mother.  The movie starts off presenting Kathy as all bad, but we come to see how hard she struggles to be good despite her character flaws.

The movie isn’t perfect, of course.  It could have been 10 minutes shorter and it wouldn’t have hurt anything.  Also, at times it straddles the line between “symbolic” and “symbolic with a capital S” to paraphrase the great Roger Ebert.  That being said, I highly recommend it.  It’s a perfect companion piece to “The Babadook.”  Both are excellent examinations of parenthood.

“Eyes in the Darkness” featurette

The Monster is now available on bluray per Lionsgate