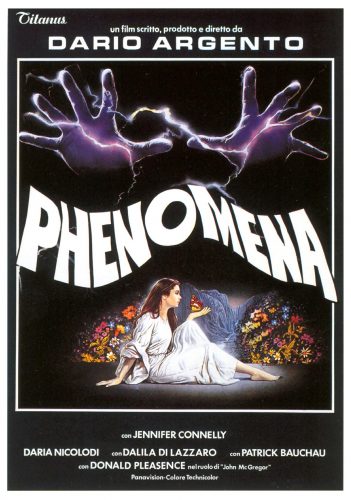 Although I had seen the television commercial for Suspiria in 1977 and was frightened half to death from it, my real introduction to Dario Argento’s work was in 1985 when I saw the television commercial for his new horror film called Creepers, which was a silly title at best, but I was very intrigued by the images that accompanied the rather ominous and strange voiceover which mentioned Mr. Argento’s name.  I had to see it.  Along with six strangers, I spent the sunny afternoon of Friday, August 30, 1985 watching the first showing of this film while my parents and younger sister saw Back to the Future again in an adjacent auditorium.  The only trailer they showed before Creepers was New Line Cinema’s A Nightmare on Elm Street Part 2: Freddy’s Revenge.  When Creepers began, the framing at the film’s start was completely off and the top of the screen was seen at the bottom.  Someone in the audience shouted, “HEY!!!  FIX THE MOVIE!!!”  After several moments the framing was corrected and I sat through what was and still is my favorite film by this director. 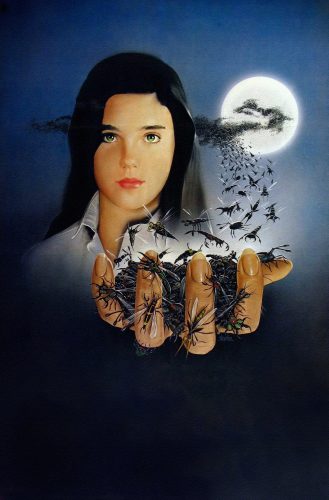 I emerged from the theater a changed person. I was overwhelmed by this at times corny though undeniably uniquely-shot film that mixed heavy metal music with violence. The camerawork, the editing, and most of the all the incredible beat of Iron Maiden’s “Flash of the Blade” set to Steadi-cam fluidity was breathtaking. It was a new kind of cinema that I had not seen before and knew that I had to see more of it. It would be more than two years before the longer version of Creepers known as Phenomena would find its way into my hands.

Largely regarded as Mr. Argento’s most personal and favorite film of his own filmography, Phenomena is also one of his weakest efforts from a plot standpoint.  For me, there is something undeniably entertaining about the poor dialog and bad dubbing that makes this film endearing and so much fun to watch, and as I would later learn these attributes have both been a staple in Italian horror films long before this film was made.  In fact, virtually all of Mr. Argento’s films made during the 1970’s and 1980’s boast ludicrous dubbing and equally inane dialogue, but I find them both charming in a strange way, and are easily quotable to others similarly afflicted!

Jennifer Connelly was chosen by Mr. Argento to play the lead in Phenomena because in his words, “She’s beautiful! Tremendously beautiful!”  Jennifer Corvino is a 14 year-old student at an all-girls school in Switzerland (not unlike Suspiria‘s Suzy Banyon in Germany) who finds herself caught up in a murder, and enlists the aid of insects and entomologist Donald Pleasance to help find her roommate’s killer. Mr. Argento wisely chose the breathtaking Swiss Alps as the film’s milieu and the results are both unprecedented and astonishing. He also makes terrific use of the Steadi-cam and it never feels over-used.

Phenomena is by no means original, but it does contain an interesting plot point wherein the police use the help of insects to determine the exact time/date of a person’s death. I initially believed this to be nonsense and simply a plot device to further the story, but I later heard of real-life cases where murders were solved with the aid of insects. Mr. Argento actually got the idea for the film while vacationing during the previous summer and heard of such a case on the radio.

Phenomena has been released on home video more times than I can count since it landed in my hands on VHS eight months after I first saw it.  Between the laserdisc and the various DVD incarnations, it’s enough to drive the die-hard collector to murder as one attempts to obtain the “definitive” version.  In 1997, a double-laserdisc of Phenomena was released in Japan and ran $150.00 as an import and contained the full 116-minute cut of the film.  In 2011, Arrow Video released a terrific high definition, region-free Blu-ray of the film sporting the more well-known 110-minute cut and an array of newly-produced extras.  Now, a deluxe, steelbook edition of Phenomena limited to 3,000 units comes to us by the fine folks at Synapse Films who also gave us Demons, Demons 2, and Tenebre.  This set is absolutely beautiful and definitely worth the price of an upgrade as it sports the following:

Three (3) different cuts of the film, all available in high-definition for the first time ever in one collector’s edition package:

Be aware that the extras that appear in this new Blu-ray release are completely different from the ones that have been released before, so hold on to your Anchor Bay DVD and Arrow Video Blu-ray if you have them, as their extras are excellent as well!

There is a brand new audio commentary track on Phenomena (the 110-minute cut) moderated by film historian, journalist and radio/television commentator David Del Valle who speaks exclusively with Argento scholar and author, Derek Botelho, author of the excellent book The Argento Syndrome.  The discussion is both spirited and informative as Mr. Botelho clearly knows his stuff.  I love listening to commentaries that tell me anecdotes that I either forgot about or never knew before, and there is plenty of interesting info here.

There are also two completely different sound mix options on Phenomena (110-Version), including the original 2.0 stereo mix, along with a rare alternate mix containing different sound effects and music cues.

Optional English subtitles for the Deaf and Hard of Hearing on the 110-minute cut of Phenomena and on Creepers.

There is also an exclusive Synapse Films Phenomena CD soundtrack which contains the complete 16-track Goblin instrumental score originally released on Cinevox Records in 1997, along with three additional music tracks from Andi Sex Gang and one from Simon Boswell.  Many incarnations of the film’s soundtrack have been released over the years, but none of them have ever been definitive.  This CD, exclusively available from Synapse Films, is the first time these music tracks have been included on the same CD compilation.  Unfortunately, the most glaring omission is still Bill Wyman and Terry Taylor’s “Valley Bolero” as heard in the sequence when Sophie goes to visit her boyfriend just before she’s murdered.  This track, to my knowledge, has never been released before. I recall at the time of the film’s release that in an interview with the late Phil Nutman, Mr. Argento had considered using the Frankie Goes to Hollywood track “Two Tribes” in the film.  I’ve often wondered where this would appear had it been used.

Along with the discs is the requisite accompanying booklet that discusses the film.  This one runs 20 pages and features one of the Japanese movie posters for the film on the cover.  The first essay consists of the liner notes penned by Michael Gingold, who does an excellent job of giving the viewer his own impressions of the film.

The second is by Gary Hertz who worked for New Line Cinema when Creepers was released.  It is a fascinating read as Mr. Hertz describes how he first saw Dario Argento’s work and then got to meet him as he toured the U.S. for the release of Creepers.  What is most interesting is realizing that Phenomena was edited down  to the Creepers cut by director Jack Sholder, whose sequel to Wes Craven’s A Nightmare on Elm Street was the trailer on Creepers.

The third and final essay is by Vincent Pereira and Don May, Jr. who discuss what it took to bring these cuts, particularly Creepers, to high definition.

Watching Phenomena again makes me realize just how much I miss Daria Nicolodi, Argento’s long-time girlfriend who appeared in seven films for him. She brought so much to his films, and her absence is deeply felt more than ever now. In Profondo Rosso, she played the wonderfully sweet journalist, redubbed by Carolyn de Fonseca; in Suspiria she emerges from an airport with no dialog; in Inferno she’s the strange Elise Stallone Van Adler who keeps finding paint on her foot; in Tenebre she’s Peter Neal’s secretary Anne, redubbed by Theresa Russel of all people; here in Phenomena she’s the sinister Frau Bruckner, again redubbed by Carolyn de Fonseca; in Opera she is Mira, and this was the first time that her actual voice was used; and La Terza Madre she is Elisa Mandy (again with her own voice).

Donald Pleasance is also good as the entomologist.  Some have complained about his performance, but I’ve never seen him give anything less than 100% in his roles, however off-beat. His presence in a horror film is always welcome.  Check him out in Gary Sherman’s Death Line (1972), he’s brilliant.

Phenomena is not Mr. Argento’s best. IMHO, Deep Red holds that title. It is, however, a terrifically entertaining murder mystery with some great set pieces and a driving score by some members of Goblin among others.

Here are some links to other sites regarding the film: