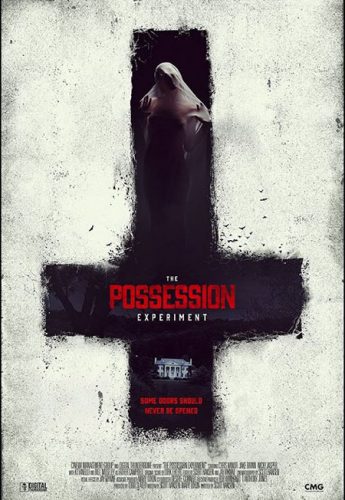 When a student takes on a theology project, he taps into another side that had been hidden away from him. 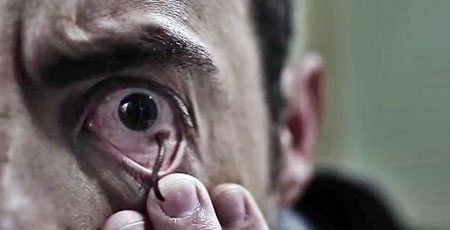 College student Brandon Jensen (Chris Minor) loves horror and when his theology professor assigns a project, Brandon decides to do a documentary about exorcism.  Brandon actually wants to document himself being possessed by a demon, so he starts an online fund raising campaign that goes viral, because people want the chance to watch him being possessed live online and then going through an exorcism himself. Possession films have been done to death, but the use of social media is a clever way to make this film seem fresh and keep your interest.

Brandon recruits a lazy, stoner classmate, Clay Harper (Jake Brinn) to be his partner for the project. Brandon does all the research and organizes the project, while Clay just sort of tags along and helps out when needed. They randomly meet a medical student, Leda Morgan (Nicky Jasper), who excitedly volunteers to work on the project with them, when she finds out it’s about exorcism.

While doing research for the project, Brandon comes across a story about an exorcism gone wrong that took place 20 years earlier at a now abandoned home, and then discovers the police have a video tape of it. The police thought the incident was a multiple homicide and suicide, because during the exorcism, several people died, including the woman who was possessed and a priest, Father Mark Campbell (Bill Moseley).  The event was being documented by a photographer, who is the only survivor and runs away when the possessed woman murders everyone. We witness the exorcism at the beginning of the film and after the woman kills everyone and the photographer flees, she hears a baby crying. Being a huge fan of Bill Moseley, I was excited when I saw his name in the credits, but I was really disappointed that it seemed like he was only in the film for about five minutes.

Brandon and Clay decide to go to the abandoned home where the exorcism took place. It’s a very creepy, run down, large home, and Clay isn’t too thrilled about having to investigate it. Of course being obsessed with the supernatural, Brandon is eager to explore every inch of the home, and discovers a passage in the wall that is sealed shut.  Brandon convinces Clay to help him open the passage.

Brandon crawls in and discovers an old spirit board, which much to Clay’s dismay, they take with them back to their dormitory and begin experimenting with it.  Strange things begin to happen around Brandon, and he is documenting everything by doing a video blog about the project. Brandon realizes he has become possessed and tries to control it, while Leda keeps a check on his vital signs, so she can document any changes that may be caused by the possession. By now, Brandon’s online fund raising campaign has raised more than enough money for him to be able to livestream his own exorcism.

Brandon’s mother becomes very upset and won’t even allow him in her house, after she finds out what he’s working on, and that he has been to the abandoned house. This causes Brandon’s father to reveal a family secret to Brandon, that turns out to be a major plot twist. In fact, this plot twist was so outrageous, that it was hard to take the film seriously after that, but I tried to keep an open mind.

Brandon recruits a psychic medium, and he, Clay, Leda, and the medium livestream their attempt to perform an exorcism on Brandon. What they don’t realize is that, as a part of the plot twist, a Satanic cult has been involved the whole time and they have other ideas about what should be done with Brandon and the demon who has possessed him.

The most notable thing about this film was the editing and the bits that looked a lot like a music video.  Chris Minor was believable and intriguing as Brandon and he and Nicky Jasper as Leda, were the best actors in this film, along with Bill Moseley, even though he didn’t have very much screen time. There has been an  excessive amount of films about possession that have been coming out for years that everyone is sick of, but this film is a bit different  and unique, even though it ultimately fails, but not for lack of effort. 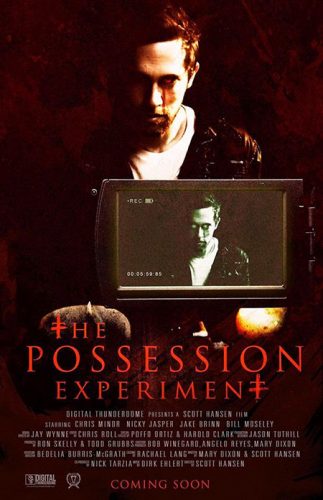 . The use of social media platforms and other elements make it feel relevant. The crazy plot twist that Brandon’s father revealed almost ruined the film, because it was just so outrageous.  As I already mentioned, the acting by Brandon and Leda stands out and almost saved the film, if it hadn’t been for the incredibly predictable ending.

Two out of Five Skulls