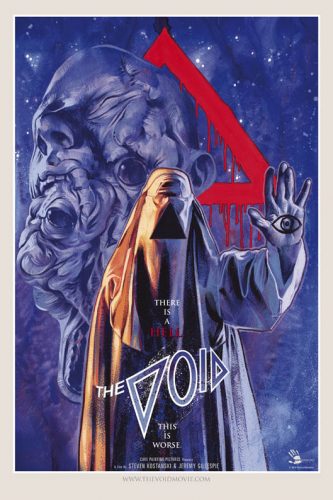 Screen Media Films acquired U.S. rights for the horror title “THE VOID”, which is written and directed by Jeremy Gillespie and Steven Kostanski and stars Aaron Poole, Ellen Wong, Kathleen Munroe, Stephanie Belding, and Kenneth Welsh, will be released in theaters day-and-date in Q1 2017. The film previously made its world premiere at Fantastic Fest earlier this year, followed by additional festival screenings at the London Film Festival, Toronto After Dark Film Festival, Stockholm International Film Festival, and Abertoir Horror Festival.

In THE VOID, officer Daniel Carter (Aaron Poole) happens upon a blood-soaked figure limping down a deserted stretch of road while he’s in the middle of a routine patrol. He rushes the young man to a nearby rural hospital staffed by a skeleton crew, only to discover that patients and personnel are transforming into something inhuman. As the horror intensifies, Carter leads the other survivors on a hellish voyage into the subterranean depths of the hospital in a desperate bid to end the nightmare before it’s too late.

“While THE VOID is in part an homage to a few of my favorite genre films, it is uniquely terrifying and disturbing – in the best ways possible. Genre fans will have a fun ride,” said Seth Needle, SVP of Worldwide Acquisitions at Screen Media.

“It has been a long road to get this film made. We fought passionately to craft a terrifying story loaded with amazing practical effects and a stellar cast. Our entire team is thrilled to have partners like Screen Media on board who want to share it with a wide audience as much as we do,” said producer Casey Walker at Cave Painting Pictures.

The deal was negotiated by Needle with Nate Bolotin and Scott Freije at XYZ Films and with CAA on behalf of the filmmakers.