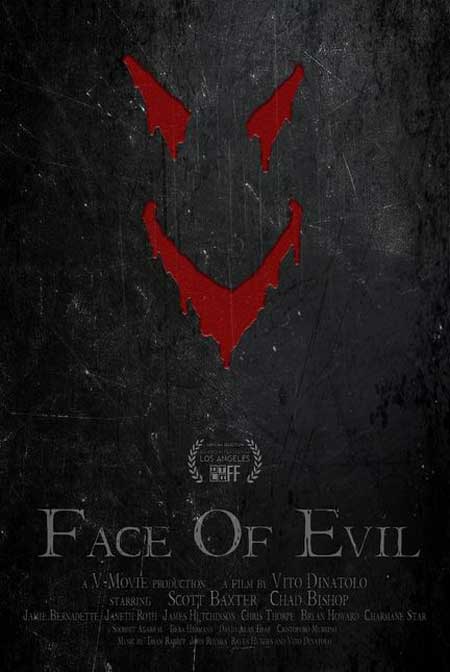 Private Williams comes back from the Middle East to find out hell is home, as a mysterious epidemic turns his surprise party into tragedy. The night has just begun.

If you’ve watched enough films, you can see how movies are inspired by others. It’s not unusual for directors to combines ideas from certain movies to make their own cinematic story. Sometimes the results are spectacular, and other times the results are a mess. Face of Evil is a movie that tries to combine elements of a zombie movie with aspects of Jacob’s Ladder. It’s in an interesting meshing of ideas that never quite works.

Director Vito Dinatolo gives us the story of Jay (Scot Baxter), who is coming home from fighting in Afghanistan (we assume). His roommates, along with his sister Katy (Jamie Bernadette) are throwing him a welcome home party when Jay’s ex-girlfriend shows up. Jay shares with her a very potent alcoholic drink he picked up while in the Middle East, The drink immediately makes her sick. Shortly thereafter, she turns into a zombie and starts killing people. Her victims then become zombies themselves.

Jay manages to escape, running into his old squad-mate Sarge (Chad Bishop). Sarge explains that an unstable vaccine they were given is the cause of the zombie outbreak, and they have to find a Dr. Carter to see if they can help stabilize the vaccine. However, Sarge himself may not be terribly reliable. He doesn’t know where to find the good Doc, and he’s paranoid to the point that it’s surprising he left home without his tin-foil hat.

Face of Evil doesn’t waste much time getting to the carnage, but that’s also part of the problem. No one’s given time to really be fully developed, and we don’t care about their fates. We don’t get to know his roommates,  and they’re basically are just caricatures. Some of them are just obnoxious. It’s so obvious these people are going to die that it’s surprising they weren’t wearing the red-shirts from the original Star Trek series. We’re not given reason to care what happens to them, and a couple of them you can‘t wait to see them die. If more time was spent developing these characters and their relationships with Jay, there would have been a bigger chance to build tension when things hit the fan. It also would have helped build to the big reveal at the end of the movie.

It doesn’t help that these characters are kind of dumb. Two characters try to escape the house through the front door, but it’s locked and they can’t get it open. However, they don’t take the time to run out the back door, which is wide open, and jump the fence, which Jay himself clearly does later. The undead themselves are kind of laughable. They look like low-rent deadites from the Evil Dead movies. The make up on them is rather lame, and they don’t do much to engender real terror. In fact, one scene where they’re chasing after Jay actually caused me to burst into giggles.

No one is hurt more by the rushed beginning than Jay himself. No time is given to develop him. We get hints that he’s changed, but we really don’t get enough time to really see what that truly means. He keeps telling people he’s not a hero, but we don’t get to know why he feels that way. In the long run, he just comes across as a flat character, and Scott Baxter’s bland performance doesn’t do much to bring anything to the table.

The movie is well shot and doesn’t betray it’s low budget. There’s very few gore shots, but the ones that are there are well done. There’s a few scenes that manage to build some tension. However, shoddy acting, shoddy dialogue, and uninteresting characters really holds this movie back. The real shame is that I think Vito Dinatolo was trying to say something about the effects of war on the soldiers who fight it. Unfortunately, this movie doesn’t do a very good job of getting that message across. However, I think this director has potential to give us something decent in the future.