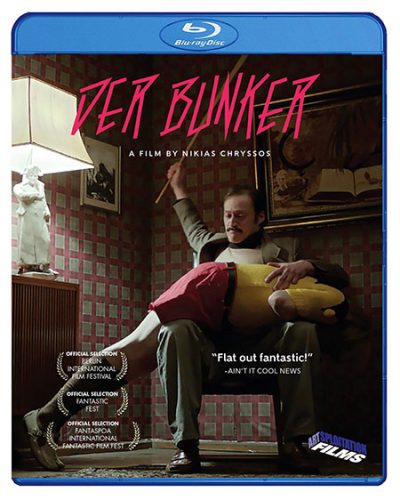 A college student on the verge of a breakthrough in his research holes up with a family inside a bunker for a little peace and quiet.

German cinema is not known for it’s, how shall we say, sanity. Director Nikias Chryssos’ film Der Bunker made sure that didn’t change. At it’s heart a story of family dynamics and the wishes we all have for our chidlren, Der Bunker is about a young college student who is researching advanced physics, something to do with the Higgs particle. He decides to stay with a family who lives in the countryside, renting a room where he feels he can get the quiet time he needs to work out his theories. He is shown to spartan accommodations that are more basement than hotel room, but he is sold on the fact that it is, indeed, the solitary confinement that he seeks. He doesn’t have quite enough money to pay his way, so Father, the owner of the house, offers to let him do some work around the house to settle the rest of his bill.

Enter Klaus, Father and Mother’s son. He presents himself as eight years old, yet looks at least twenty eight. He hangs in the background, seemingly timid and shy, and when the Mother is told by a mysterious stranger named Heinrich (who we initially see off-screen) that the Student would be an excellent choice to replace Father as Klaus’ tutor, she coerces him to help with the promise of debt repayment and possibly sexual favors. Mother and Father are determined that Klaus will one day be President (seemingly of America, oddly enough,) despite the fact that Klaus is neither American or anything approaching what any of us could imagine as a Presidential candidate (though he’d probably get my vote in the current election cycle.)

Klaus is home schooled and is not particularly good with his studies, you see. In fact, he knows little to nothing about anything that he’s ever supposedly learned. Mother and Father seemingly equate knowing the capitals of all of the countries with fitness to be President, and insist that it is the building block upon which Klaus must base his education. The Student helps with this, and does his best to teach Klaus what he needs to know. However, after many tried and failed efforts to teach Klaus, he finds a method that works, using the family’s fondness for corporal punishment to drill the lessons into Klaus’ head, earning the adoration of the rest of the family. It quickly becomes clear that there’s something very strange and possible very dangerous going on, as Mother’s friend Heinrich seems to communicate with her through an otherworldy voice, a schizophrenic manifestation of her desires to keep her son as close as possible.

And I do mean close. She breast feeds this “child”, and even if he was eight, that would be creepy. As he’s most decidedly not eight, it’s even more so. Of course, when her promises of sexual favors for the Student are fulfilled, she breast feeds him as well. She reveals to him that she is inhabited by Heinrich, who has been with her since she was a young girl. He was a traveler from another planet, and when he became sick, he told Mother that he would need to cohabitate her body. He is her adviser, and he runs the show behind the scenes by making sure that everyone in the house is kept under Mother’s thumb.

And with that brief summary, I think it’s quite clear that this was a weird damn movie. It was incredibly well acted, beautifully shot, and quite capably directed by Chryssos, and all in all, it’s an excellent film. It’s a slow, twisted mindf**k of a film, very much in the vein of Dogtooth for those who have caught that gem. The cast, led by Pit Bukowski (The Student, who looks like a cross between a young Sting and Jessie Plemmons from Breaking Bad and Friday Night Lights) is excellent. They’re all sufficiently creepy and nonsensical, which fits perfectly into this bizarre “horror” comedy. There are some laughs to be had, though its certainly not an uproarious movie. But hey, it’s German, and while they’re certainly known for their weird films, they’re definitely not known for outstanding comedy. It has just enough to fit nicely into a dark comedy subgenre, though, and that’s the most you can ask for from a film like this.

Der Bunker is a good film, but I can’t quite describe why. Even now, I’m not quite sure what I’ve just watched. There’s nothing over the top about it: in fact, even the breast feeding scenes are relatively tame compared to most of what’s out there nowadays. There’s very little blood, and there’s not much in the way of profanity or lurid subject matter either. It’s just an uneasy film to watch. Chryssos does a wonderful job with the cinematography here, keeping us all just a little on edge throughout the film, despite relatively nothing happening. While I can’t put this movie in the realm of Dogtooth as far as great films go, it’s definitely in a league of its own for bizarre, unsettling German films. And Krauss is one creepy looking dude, too, which certainly doesn’t hurt.

Der Bunker is now available on bluray per Artsploitation Films