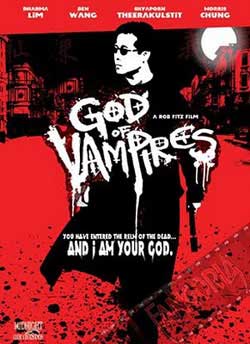 SYNOPSIS:
Frank Ng is a professional hit man; in fact he is the best. Frank gets assigned his jobs via the Fixer who informs him a job that just seems too good to be true, a million big ones just for one kill. Frank is about to learn though some jobs just aren’t that easy to follow through on, in fact some of them are down right hell!

“Cut off his head…burn the body…and bring the head to me!”

Ah the vampire movie with rare exception I cannot say that I am a fan of the subgenre. The little blood suckers do seem to be quite popular these days and every now and again among all of the copycat films there is something that just blows you away….that statement pretty much sums up God of Vampires.

Frank Ng is a professional hit man who we get to see casually attacking a crime syndicate at the beginning of the film. While everyone is fumbling around with guns turning the place into Swiss cheese he simply ducks behind a corner and takes calls on his cell phone, including one from a persistent long distance provider! Frank doesn’t even get to finish the job however since the man he was sent to kill simply trips over his own feet and ends up shooting himself, it is during this opening sequence one gets a taste for the violence and gore that are going to occur over the coarse of the film and let me tell you this one gets kind of messy!

Frank finishes up his job and immediately goes to a room where he picks up a phone and is immediately able to speak to “The Fixer”. The Fixer is never shown on the screen but his voice is heard throughout the opening of the film. The Fixer gives Frank a new nickname by calling him “Frankenstein” and offers him a new job with a handsome pay cut of one million dollars. There really isn’t any more information for Frank as he is informed that he has to meet up with the ones who have ordered the hit to get all of the details.
When Frank meets up with the group who has ordered the hit he finds a very twitchy and drooling troll of a man who informs him about the person he wants Frank to kill. The contact doesn’t give Frank too much attention only tells him where Frank might be able to find him and tells Frank that he wants the victims head as proof that they really are indeed dead. Frank manages to talk the troll of a man out of more money for wanting the head and the two part ways with Frank walking away with half a million dollars already.

The next scene is really nicely done as it is done split screen style. On one side of the screen the viewer can choose to watch two young men taking a kidnapped girl into a room, on the other side the viewer gets to walk Frank make his way to the said gentlemen. Again this is some pretty gory stuff even when there are just gunshots, luckily though there is also knife wounds and later a chainsaw…hold on I’m getting ahead of myself.

After this sequence the viewer is introduced to the person that Frank is supposed to kill, and judging from the title of the movie and this guy’s wardrobe the viewer is pretty safe to bet that the guy is a vampire. Frank storms in and attacks the vampire and even thinks that he has killed him however the vampire suddenly springs back to life and attacks Frank who barely escapes with his life, and a little pendant that the vampire seemed to have an interest in.

Frank quickly runs back to the phone to talk to The Fixer and attempt to translate the strange pendant that he has found. He informs The Fixer that he is going to be found at A Better Place which turns out being a pretty rough bar where a group of assassins hang out. A man Frank knows quickly runs in and informs Frank that in just the three hours since Franks failed attempt everyone near Frank is starting to die, even The Fixer is dead. It’s when Franks contact attempts to leave that the vampire suddenly shows back up resulting in a pretty great fight scene involving all of the assassins who have just had their night ruined by the undead.

Frank realizes that he is dealing with supernatural powers and quickly searches out a contact known as Uncle Ping for assistance and only after Ping learns that just being in contact with Frank has put him in danger does Ping and several others decide to fight back against the vampire menace….and his apparent army of blind children!

First off for me to enjoy a vampire film there has to be something new to it, God of Vampires involves “Chinese vampires”, this isn’t the first film to include these films such as Robo Vampire and The Devil’s Dynamite used the same “type” of undead years ago. For those who aren’t in the know Chinese vampires aren’t romantic at all in fact only the master vampire actually can see, he blinds all of those he sires resulting in some pretty frightening looking creatures throughout the movie. Chinese vampires also lie dormant when a Chinese death certificate is attached to their forehead; in order to kill a Chinese vampire one must dismember the body!

What makes God of Vampires enjoyable though is its cast of strange and funny characters, there is a town drunk and Uncle Ping who seems to be an expert at Chinese vampires. There are also a couple of blundering assassins who accidentally think a group of goth kids are real life vampires and actually force a stake through one of their hearts in one of the best scenes in the film! When this group of ragtag soldiers decides to fight against the master vampire though things get really out of control (especially since the town drunk has decided to arm himself with a blessed chainsaw!) and the red stuff literally starts to fly.

God of Vampires is exactly the kick in the ass the vampire genre does need, unlike most films in the genre it doesn’t take itself seriously and the parts that are meant to be scary are scary and the parts that are meant to be funny are hilarious. Gore hounds are definitely going to love this one, wait until you see the blind vampire attack Frank with its tongue! The movie also ends in what could be a sequel situation so let’s all cross our fingers and hope to see more of Frank Ng whooping vampire ass!