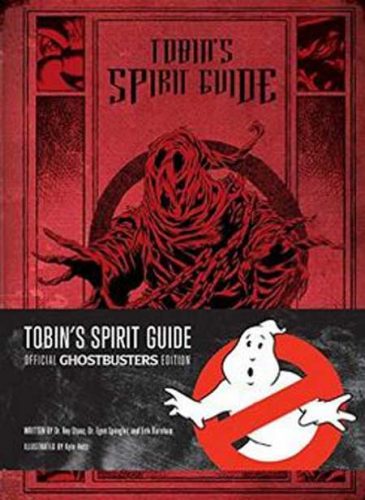 Right on the arrival of a Ghostbuster’s reboot, debuts a fictional book Ghostbuster fans must now be more than familiar with. John Tobin introduced his initial spirit guide as a aid for ghost hunters, though as we are told in the opener of this release, a slimmed own down pocket reference was needed in order to reduce the burden of carrying around a massive 35 lb book (270 odd pages). To the rescue, authors Erik Burnham, Dr. Ray Stantz and Dr. Egon Spengler  have created just the right amount of spirit-guiding to entertain the masses. Though let us not forget the stellar illustration work here provided by Kyle Hotz, who has quite an impressive history of comic/graphical contributions spanning his career.

The result of this collaboration is “Tobin’s Spirit Guide: Official Ghostbusters Edition” which by all standards is simply a great product.

Before we dig into the content, let’s give kudus to the publisher “Insight Editions” who have an impressive backlog of book releases credited to their care and attention. The book contains 96 pages, hardbound with a 2 color cover and a gloss overlay matte that is perfectly bound for heavy reading and use. The pages contain black and white illustrations laid over an aged looking sepia toned heavy lb paper stock that is surely made to last. The release itself is chock full of illustration work that previews and illustrates all the supernatural characters within. In fact, the style here is very reminiscent of an E.C. comics approach that does more than justice to helping us visualize what these ghastly creatures might look like.

The content here is what makes this release so compelling. It’s a combination of historical, mythological and the fantastical all rolled into one. Of course our favorite spirits are featured here such as “Slimer””, The Librarian (Gray Lady),”Price Vigo” and “The Stay Puff Marshmallow Man” while making room for several other intriguingly ghastly apparitions that warrant a serious Ghost-Busting to keep us out of harm’s way. 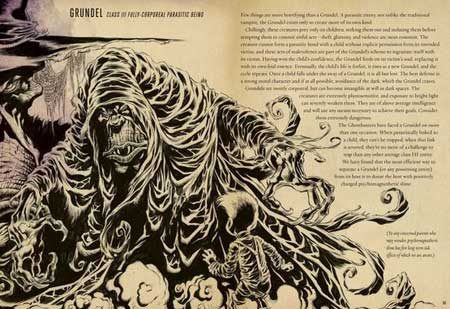 I mentioned mythology as some of the entries are directly or indirectly referenced from the lore of ages. Creatures such as “Torb”, “Lilith”, “Lotan”, “Sargassi”, “The Spider Witch” and “Tiamat” are just a few creepy unnaturals who present ghost hunting challenges to those with the talents and drive to contain spirits. We’ll remember a few of them from the films while getting some new insight into other spectres that await in the dark.

What’s great here is that the book is not exhaustive. It gives us the greatest hits rather than every form of goblin, ghost, and entity making for the most interesting of the bunch. I wouldn’t have it any other way except that it may leave you with wanting a few extras to haunt your kids with at night. But in retrospect, it is entertaining and very appropriate for older kids who are into their comic/graphic novel stages. The ghosts here are angry, slimy, wispy, organic, loathsome, intimidating and yet all seem to have oozed out of the same unearthly vortex of the after life underworld.

As one works their way thru this compendium of sorts, you’ll notice that each apparition is noted per class while narrating the levels of difficulty and experiences one should expect. Apparitions here range from entities, to object manifestations, even making way into possessed items of clothing. As one would expect, the more powerful entities arrive in the forms of demons, metaspectres, and Gods.

Impressive work that deserves plenty of revisits and story telling equipped to detail all the nasty things that go bump in the night!