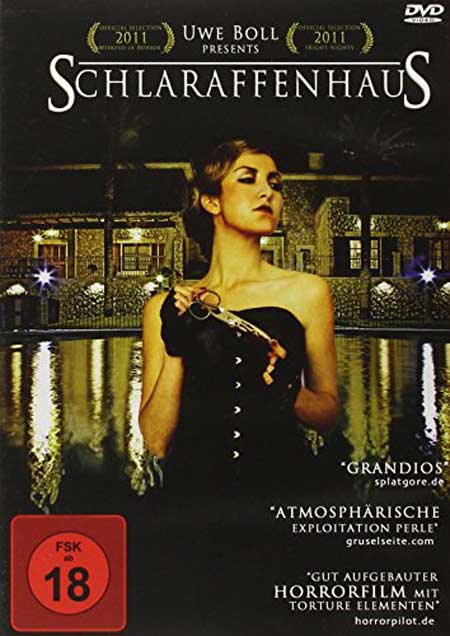 A woman’s estranged sister travels to her family estate for the reading of a will, where she and her sister are set upon by two people looking to torture their way into a fortune.

It’s been a while since I’ve seen honest to God torture p*rn. Most movies try to spread out their nastiness over the entire runtime, giving us little snippets here and there of ultraviolence while maintaining some sort of coherency to the rest of the plot. Not so with this one!

Kira has been away from her family for a while, and she’s clearly the black sheep of the clan. She returns upon the death of the family’s elders, knowing that there is a will to be read and a fortune to be claimed, somewhere in the neighborhood of 18 million Euros (Which, at the time of this writing, shortly post Brexit, is about $1.50 American). Her sister Maria welcomes her with open arms, because that’s what sisters are for. Unfortunately for the sisters, two people looking to steal their new-found fortune have followed her home, and they break in and begin a night of terror.

This one was actually an interesting watch. There’s a lot of style behind the camera, some of the shots are absolutely beautiful, and the acting is pretty decent. The only thing really lacking is the score for the film, which sounds like something out of a late 80’s/early 90’s Full Moon flick. Thankfully, the awful soundtrack is only prevalent in the first 20-or-so and the last five minuets of the movie. The rest of it is very well done.

He’s naturally suspicious, but we’ll get to that later. They start by seating the two women in chairs back to back, sewing their hands together with a needle and thick thread. While I acknowledge that they didn’t actually do this to the actresses, it was incredibly real looking. Interestingly enough, after the terrible score to start the movie, the use of sound in this scene is very effective. The only sounds we hear are a fun and ultra creepy bluesy song, punctuated by the women’s screams as they’re sewed into their chairs.

Afterwards, one of the women is forced to eat a nail-filled cupcake, and when several of them pierce her tongue, her captors remove a nail and pierce her eye with it as well. Unfortunately for gorehounds, that’s about the extent of the really believable gore. They must’ve spent the effects budget on this one scene, because everything else is either lazily done or in a cutaway, including a suicide-by-shotgun and an arrow that is inserted into a man’s brain through his nostril. It sounds way more fun that it ends up being, because we really don’t get to see much, and it’s done in a completely different spirit from the original attack.

It’s these original scenes of torture that make Candy House so effective, though. It’s torture p*rn, to be sure, but it’s also cruel for the sake of being cruel. I’ve always been a harsh critic of torture p*rn movies, but I’ve also always found them to be highly effective when done right. Unfortunately, there is real brutality in the world. Hostel and its ilk are certainly over the top, but they’re also effective because there are really things like that happening out in the world.

When you watch the news, and you hear about someone who was tortured to death (which is seemingly every other story on Investigative Discovery or OWN), these types of things are actually happening to the victims. That’s scary as hell. There’s not much that will actually scare me, but the home invasion/torture p*rn of real people in unfortunate situations has always left me feeling a bit of unease. This film has that in spades.

The man on the receiving end of the phone call comes to investigate, and he’s immediately apprehended by the captors. PVC Guy rapes Maria, cutting into her back while he does, and when she tries to escape, she’s apprehended as well. They produce Maria’s bound and gagged boyfriend (who we meet during the boring beginning of the movie), and the pair of intruders gut him. Dominatrix Chick plays with his intestines, then rubs his blood all over Maria’s face. It’s about this time in the film that we learn that Kira is in cahoots with the villains. When they discover that the will is not at all favorable to her, all of the bad guys freak out, leaving Maria to escape, which she does. The bad guys all end up basically killing each other, and… then that’s the end. Maria gets the house (which I don’t believe I’d live in after being nearly tortured to death) and 18 million Euros. And that’s it. It’s kinda a let down after so much action so quick.

What we have with Candy House is a movie with a jumbled plot, but a lot of bright spots. It’s fairly extreme, but probably not as much as it could’ve/should’ve been. We are struck with the utter pointlessness of it all, and cruel for the sake of cruel is actually a pretty good descriptor. There’s really no need to torture the girls (not to mention even less need to torture the girl who was in on it with you. Why do that, to make it look good for the other girl you’re torturing who you’re eventually going to kill anyway?), but its done anyway. It’s mean-spirited, and needless. But, then again, if it wasn’t in the movie, there wouldn’t be any real need to watch it.