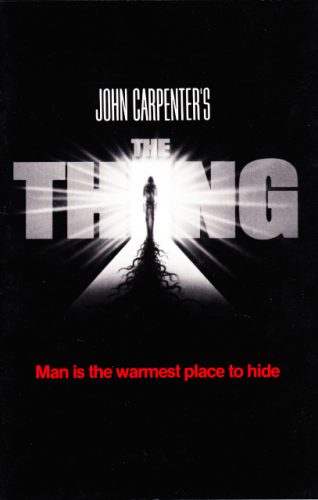 Scream Factory, the horror imprint of Shout! Factory, announced on May 31st that they will be bringing us a two-disc set of John Carpenter’s 1982 film The Thing on Blu-ray sometime this fall.  This is amazing to me as they have in the span of four years released 113 titles thus far on DVD and Blu-ray.  How is that even possible?

The set is due to boast new artwork and extras.  Considering that the present DVD boasts a running commentary with John Carpenter and Kurt Russell and Ennio Morricone’s phenomenal score isolated on separate musical tracks, I am hoping that the new Blu-ray contains all of this and more, specifically on-the-set shots of Rob Bottin’s incredible work.

Isn’t it ironic that when both Blade Runner and The Thing were released on Friday, June 25, 1982 they were both poorly received?  Blade Runner was considered boring and The Thing was panned as though the director defecated on the Mona Lisa.  Now, both films are widely regarded by many to be the best science fiction film and best horror film of all-time, respectively.