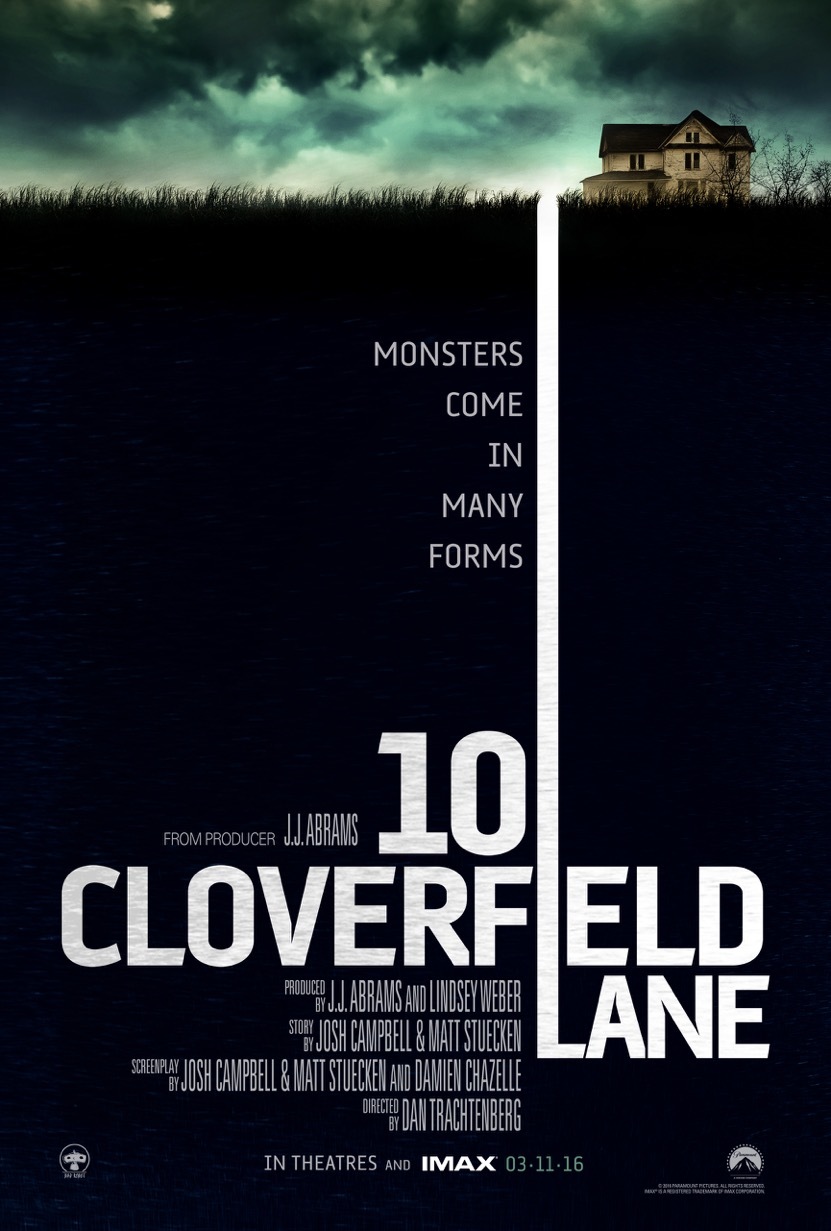 After getting in a car accident, a woman is held in a shelter by two men, who claim the outside world is affected by a widespread chemical attack.

In 2014, a film called Valencia was announced as going into production by JJ Abrams and his production house, Bad Robot. Based on a script written by Josh Campbell & Matt Stuecken called “The Cellar“, it then went through a revision by Damian Chazell (Writer/Director of 2014’s “Whiplash”). From that point on, it was basically forgotten. But earlier this year, a trailer was released for that little film, except now it was called 10 Cloverfield Lane. And fanboys everywhere went bananas wondering how Abrams & Bad Robot managed to keep all of this hidden for a few years. According to Abrams, the film “is of the same DNA as Cloverfield“, but does that make it a linear sequel or is it a separate story that just happens to take place in the Cloververse? Quite frankly, once the trailer was released it didn’t really matter. The mystery behind what the film is really about commenced to fuel the collective fires of Cloverfield fans worldwide, and its subject matter suddenly became secondary. All that mattered was that Abrams was back with a film that has Cloverfield in the title, so it just has to be great – doesn’t it?

Michelle (Mary Elizabeth Winstead) has just left her boyfriend, and moved out of the home they shared. Packing her things to leave, one can’t help but notice how silent it is all around her, there is very little ambient noise, and absolutely no people at all. Once Michelle gets in her car and drives away, it’s impossible to ignore the fact that she’s the only car on the road, and when she stops for gas, it seems like she’s the only person at the gas station as well. shortly after she gets her gas, she gets into an accident and her car comes off of the road, landing upside down with her still in it. 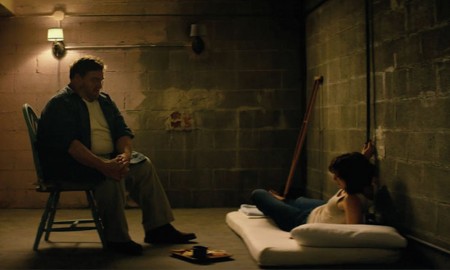 After an unspecified length of time, Michelle finds herself lying on a mattress in a cinder block room, her right knee wrapped in a harness of sorts that’s attached to the wall with a chain. She has an IV drip attached to her left arm, and she has no idea how she got here, or who her abductor is. But Michelle is nothing if not very savvy, and she furiously figures out a way to get to her cell phone that’s lying across from her. But there’s no cell service in the room she’s in, and then her abductor suddenly enters. Howard (John Goodman) explains how he discovered her car, and rescued her. When she asks if she can make a phone call, he tells her that there’s no one to call – everyone is dead already. Although he doesn’t know exactly what’s going on, he theorizes that a possible nuclear/chemical/alien attack might be behind it all. But as there’s nothing coming through his radio, he can’t be sure. What he is sure of is that the air outside is contaminated, and they’ll have to stay in his well stocked underground shelter for one, maybe two years. There’s a third person living with Howard, Emmett (John Gallagher Jr) who claims he saw a bright flash of light, and then headed straight to Howard’s shelter because he helped to build it. So he knew that it was the safest place to be.

Michelle tries to make a break for freedom, but once she gets to the door leading to the outside, she sees some pigs that seem to have been chemically burned to death by something. That serves to quell her desire to escape for awhile, but she slowly discovers that Howard might just be a few fries short of a happy meal. So she has to decide whether it’s in her best interest to stay underground, or to try and fashion an escape into a world where she might die as soon as she takes a breath. And just what are those loud noises she hears go by every so often? 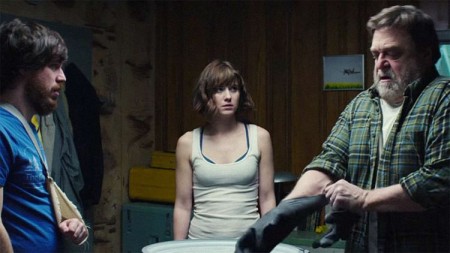 What 10 Cloverfield Lane does extremely well is create a palpable sense of tension and anticipation. First time director Dan Trachtenberg knows his business, creating an atmosphere filled with post apocalyptic fear and dread that’s more than enough to keep his audience firmly planted in their seats trying to figure out where all of this is headed. He’s ably supported by his trio of featured actors, who are all perfectly cast. Winstead takes the character of Michelle, and turns her into a heroine that engenders a great deal of sympathy as her plight becomes more and more dire. Goodman underplays Howard brilliantly, remaining outwardly stoic while seething inwardly, and his outbursts are both sudden and scary. Gallagher Jr doesn’t play as big of a role as it might seem initially, but he does a good job of keeping himself in the mix despite a broken arm.

I remain resolute in keeping this review spoiler free, so I won’t say much more about what happens during the film’s final third. But I will say that it’s a definite case of “Is that all there is?“. I found myself terribly disappointed because of how sensational the first two thirds of the film were, and I wondered how it could go so very wrong at the end. Suffice it to say that the finale of 10 Cloverfield Lane offers few answers while being something that all of you have seen before. Is there a connection between this and Cloverfield? I can’t say, but I will say that I was nearly apoplectic with anger once it was all over. As sincerely terrific as most of 10 Cloverfield Lane is, it became something tepid, overdone and derivative at the end. I’m really angry at how all of this played out, but judging from some other reviews and the opinions of some (apparently soon to be ex) friends, this is the best film of the year already.

I simply refuse to drink that damned kool aid. I have no fealty towards Mr. Abrams to worry about, so I’m gonna call it the way I see it. 10 Cloverfield Lane works brilliantly as a taut, tense thriller for 2/3 of its running time. But then it reveals its true intentions and becomes just another well shot, well directed and well acted film that’s made by people who think they’re smarter than you, so they can add a stupid finale assuming you’re just gonna love it. Maybe they are (they got my money), but much like Roger Daltrey sang back in 1971, I “Won’t be fooled again“.

The open ending here all but guarantees a sequel, but I’m done with all of this mess. You guys have fun chugging whatever Bad Robot pours into the next round of cinematic Dixie cups it foists on the public.