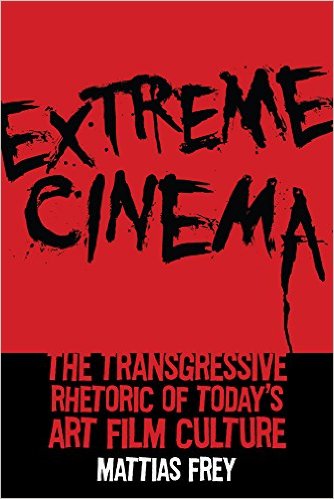 “Extreme Cinema: The Transgressive Rhetoric of Today’s Art Film Culture” marks the next addition into the handful of books published on this category of film genre. The subject of extremism in films is by no means a new concept, but one that has gotten pushed from out from the purely underground circuit to new audiences with the emergence of new film makers and products.

Author Mattias Frey takes an impressive philosophical and intellectual look at this very sub genre. Coming in at 298 pages, this release by Rutgers University Press provides a means to dig into this very controversial cinema emergence and what separates it from the rest of cinema

Horrornews.net has been following this sub genre for quite some time. We’ve even went as far as to provide quite a few listings of movies that cater to this specific type of film making and story-telling. Is it for everyone? absolutely not. However as much as we try and encapsulate its drive and attraction, there has been little written on the subject that isn’t directly tied to blogs, reviews and top 10 lists.

Author Mattias Frey  has taken that plunge by taking a hard look at what embodies this varied form of art and extremism in modern and past cinema. The book roots itself in this discussion rather than acting as another listing summary of what is “out there”. On this note, it proposes the very nature and specifics as to what is it that qualifies under this category.

Aggressive, transgress, provocative…it’s all a part of the big picture. The book “Extreme Cinema” delves into what is it that motivates these film makers and our general fascination with this body of film works that exploits sex, violence and art in a almost voyeuristic way.
There is a certain eloquence in Frey’s writing that would largely appeal to academics. Upon finish it was apparent to me that Frey’s research while heavy on the “meaning” of it all may have only scraped the surface of material out there. I say this in part due to the references that Frey would often cite as examples of extreme cinema and art house cinema. His references were very kept to the analogy of extreme cinema but were also kept at times to a very small sampling of movies such “irreversible”, “9 songs” and “I stand alone”. Other sections did list other works (many of which I proceeded to jot down as one’s I haven’t had the pleasure of delving into yet), but were still limited. The gap here appears to reside in the extreme movies that take residence in extreme gore and violence of which there are literally hundreds of titles fitting that bucket. I was surprised that most of those were left out of discussion.

“French Extremity” was included while also adding some aspects of “Asian Shock cinema” Though it may have been a mistake to list Tartan’s works as “appropriate extreme cinema”. I will say there are a “few” from that label, but on the most part those films are generally rooted in generalized Asian horror. A heavy dive into CAT III “would have” satisfied inclusion.

I believe that Frey has nailed the conceptual aspect on the head as to what drives Extreme cinema and what constitutes its existence, however I would love to see a more comprehensive follow up that really digs into categorical titles and their relationship. It would require days and weeks of film watching, so that might have been a deterrent in this debut.

The book covers alot of ground despite seemingly missing some more important titles of Extreme cinema. Film festivals, various distributors, and more specific aspects of Extreme cinema such as a hard look at the lines between art, p**nography and extremism provide plenty to consume in the way of how this sub genre is viewed and how it has been interpreted. In short, the book is a great addition to extreme Cinema lovers libraries though be prepared for alot of philosophical views and comparisons.

Other companions to this release? You can also check out Phil Russell’s Beyond The Darkness: Cult,Horror and Extreme Cinema” which will give you a nice contrast to the “headier presentation”.