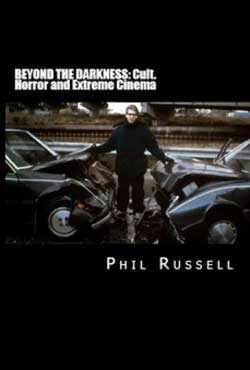 It’s very well possible, that “this” book in particular “Beyond the Darkness” has been long overdue in the film and cinema literature circuit. As those who are familiar with this style already know, many of these films are not the kind that mainstream will embrace (let alone admit to ever watching). It’s hard core stuff pain and simple. The worst of the worst for that matter. The films that get banned, written about, disgust, and generally held accountable for the downfall of mankind. The mainstream comforts in the fact that they will never “get” to see some of these, but with films like “A Serbian Film” hitting the shelves at Best Buy, ..well those days are becoming a thing of the past.

Now, those who would pick up a book like this generally are not just cinema-pile book shopping. They have come with a purpose and an agenda. This agenda, if you may is one of the underground horror sector that seeks films that push the boundaries of everything ever created. The nasty stuff, the stuff that you share with those who understand and those who will listen. That special sharing moment when you proclaim “now I’ve got something you have to see at least once!…”  (And then compare notes with those who have, to see if they have a title you “haven’t”)

Yep these are the defining cinematic creations from filmmakers who push the envelope and want to either make a statement or just gross the hell out of you. Author Phil Russell has recognized this need (In fact we as a web site have recognized this need simply by thru popularity that “extreme cinema” articles get). Though with any research or comfort, having a book to curdle up to is something more portable, more personal.

Phil Russell has tackled quite a bit of films in this edition, not “all” mind you but a heavy helping of extreme, CAT III and subversive cinema. Any newbie to this “sector” will quickly get an eye opening as the reviews take you from horror into “beyond” horror with a full load of titles that are well known for being off the grid. In fact good luck with tracking many of these down. With that being said, these are the titles that small independent bootleg distributors relish in. They are out there, and if not, keeping trying as they will rear their ugly heads again.

For those who seek out these films, it becomes sort of a collector’s market, checklist of sorts of trying to track down all the nasty stuff. Phil Russell has put the research into defining some these films for collectors and readers to educate themselves on with a paperback coming in at over 400 pages of pure nastiness. As a reader collector myself, (if not purely to know of all the releases in this category) this is a great find and quite frankly saves me those extra hours needed to pick thru the Internet whisperings of what exists.

Phil has a great sense of reviewing and how to interpret these taboo subjects so that readers get the gist without always to refer to “he stuck his prick in her eye socket” style reviews. While these films (most of the time) fall outside the area of p#rn, they still come close in a perverse way.

The book takes an alphabetical approach which is fine from an alphabetical perspective, though I would have preferred that the CAT III, the extreme films and the cult films each had their own sections. This would eliminate having films like “Ghosts of Mars” backing up to “Gong Tau”, and so on. I think if one were picking this up not knowing which film was which, they might get confused in the jump from one style to the other. With that said, the extreme films and the CAT III films could easily make up their own volumes as a 2-3 part collector set….just a thought.

The book ends on a few essays about the morals, the censorship and the trend that makes up where we have been and where we are going as movie culture. The book also features a few interviews which provides a welcome inclusion. I might also recommend getting a few of the cult extremists like Vogel, Stanze, Ittenbach, and Zebub on board for some serious reveals in a follow up edition.

In summary this is a great book to have on hand. One reason is simply to seek out these edgy films by name which might allude you in your searches (take for instance the collective of Nick Zedd) which falls off the radar. My guess is, that this release will grow in time with new additions (as they are located that is). Fans of hardcore horror would fair well with this compendium of sorts (if only to avoid having to see some of these). 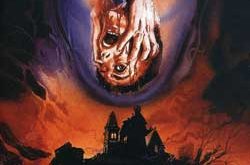